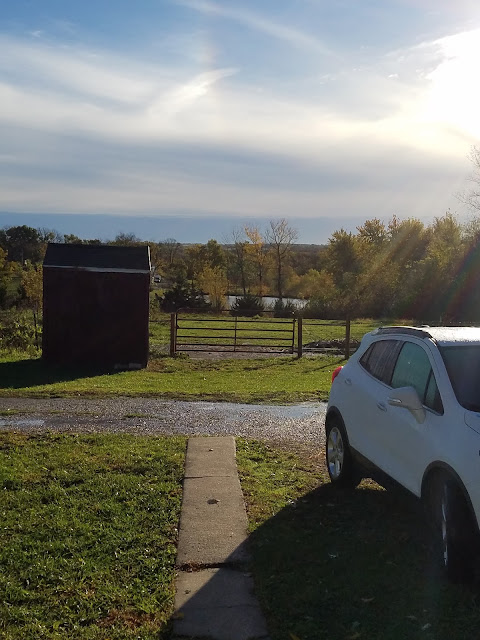 The view from my porch steps about 30 minutes ago.  We had a very bad storm last night, and got about 2.45 inches of rain, along with booming thunder and scary lightening.  The dogs and Sister hung close, they were all nervous.  Heck, I was nervous!  Though the lights flickered, they didn't go out, but I was reminded how rain fade can obscure your television dish receiver.  It was okay, I was
in the middle of a great book, and I am also a hopeless Instagram addict. 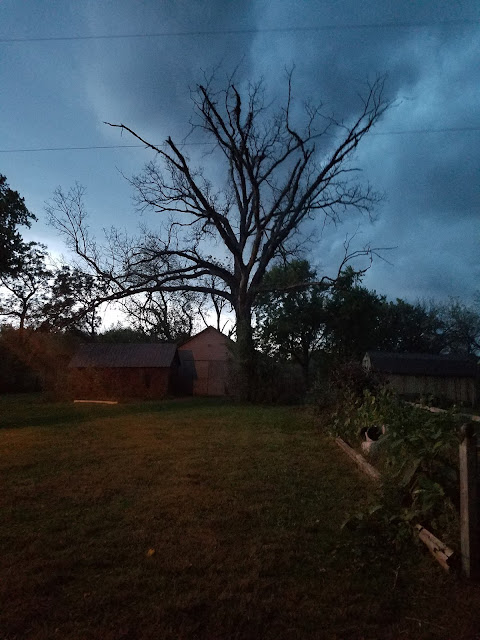 Here we are at the beginning of the storm... I had come out of church at 6, and
realized if I stopped at Casey's for a root beer (my big Saturday night fling) that I
was going to be in trouble at home, trying to do chores in rain.

I found about 8 chickens still out, milling around in the chicken yard, but by the time I went over to
batten down the hatches on the "cat house".... and went back, everyone had gone in.

I hit the porch just as the rain started, the dogs rushing to keep up with me.  Lilly has feared storms since she was a puppy.  At the big house, she could escape into the darkest corner of the basement, where no light shown in, and stay down there until the hoopla was over.
Here she stays in the hallway between the living room and bedrooms.  Last night, however, she stayed near me. 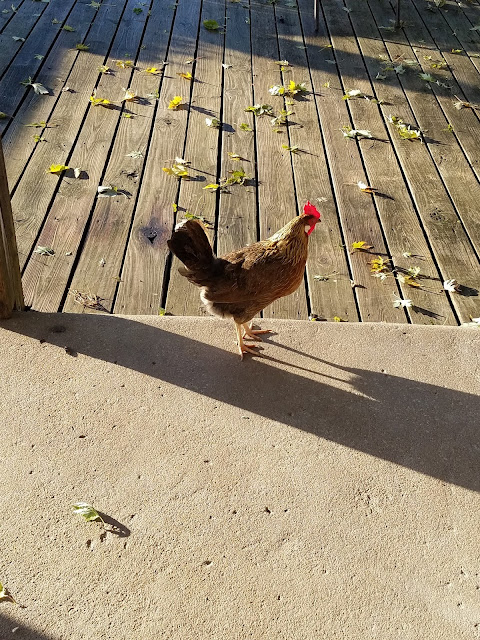 As I sat at the kitchen table eating breakfast this morning, I heard cackling.
Some one was hanging around the door, looking for a treat.

(this is a brown Leghorn) 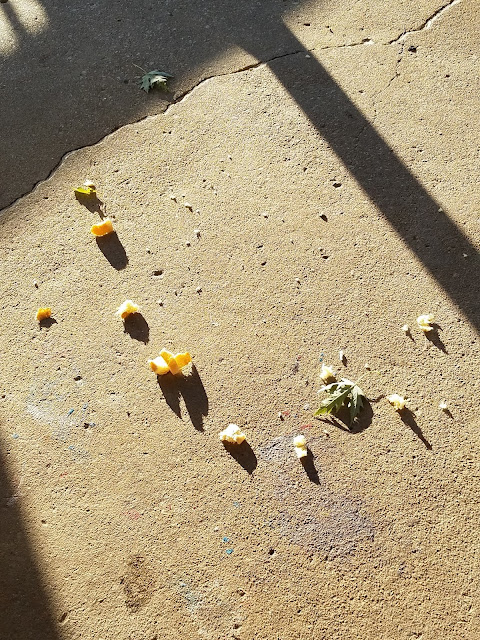 I should say that I let Sister out, as well.  He spent Friday night out, as well, and
I brought him back in the next morning.

He was trying to get out the door this morning and I went ahead and let him out, but yes, I have qualms.  Nickie lived in/out his whole life here... Gwen was in.  I really don't want to lose Sister, so may reconsider this.

In the meantime, there is this: 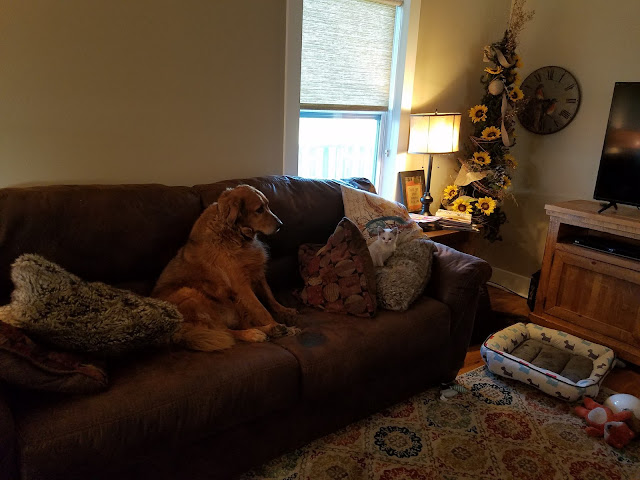 In the meantime, there is this.

I did not come back from Iowa alone.

I heard a growl from the living room, and looked up to see this.  Lilly and Twinkle, and Lilly was definitely not amused.  It took Lilly six months to accept Sister, and I think it will be six with Twink (thank you Jeanne, for the name suggestion).

Twinkle and Sister are being kept apart at present, as Twink is on medication for a cold, and then has to have her vaccinations.  She came from a goat farm where the kind farmer leaves cat food out for the ferals.  She is extremely friendly, though, unlike the Wild Four in my cat house. 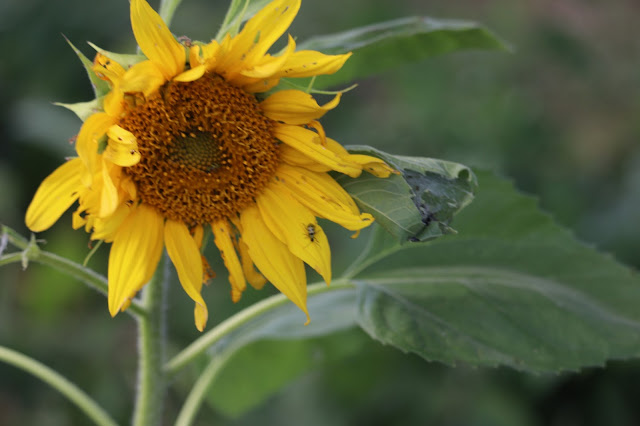 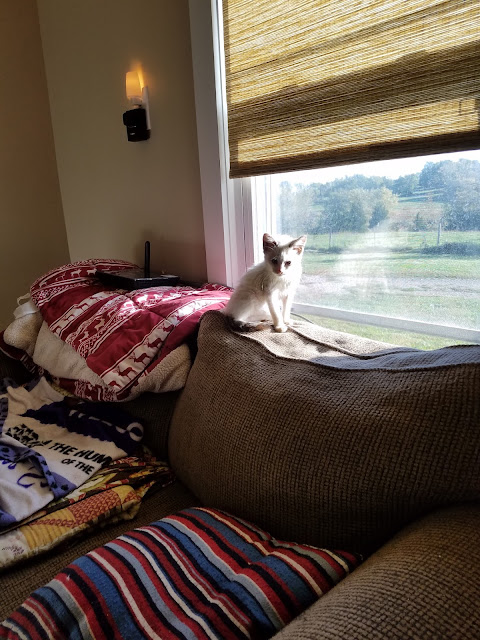 Twinkle in her office. 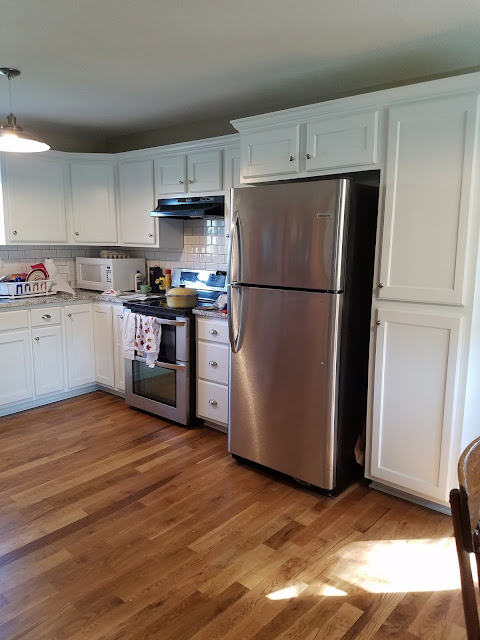 Another view of my kitchen.  I bit the bullet and bought a new fridge,
but the double-oven stove is one that Keith bought me right before our move.
I left it here for the tenants to use, and it looked as if the oven had never been used.
Paiton and I are going to put it to good use today, making Halloween cookies.

I intend to put a rug in the kitchen, but have not decided on one yet.  I am paying cash as I go, so there is that, too.  I don't want any charges hanging over my head. 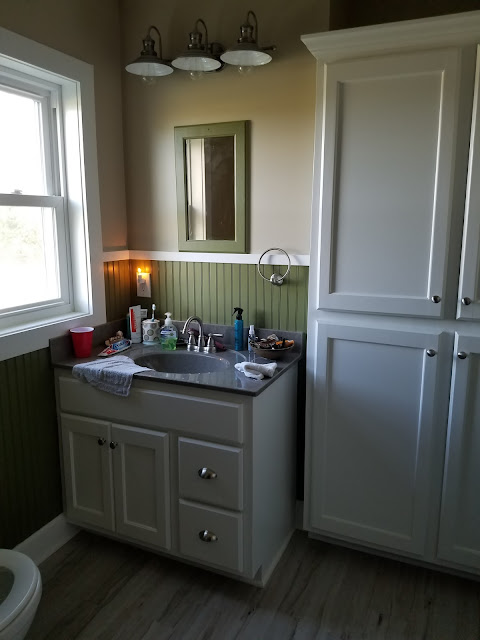 Part of the bathroom.  I opted for NO tub,
I have a shower only.

It is such a luxury having that beautiful linen cabinet made by
Lavery Woodworks, who did all the cabinetry.  The ONLY thing
I would change is having a third drawer put in the vanity. 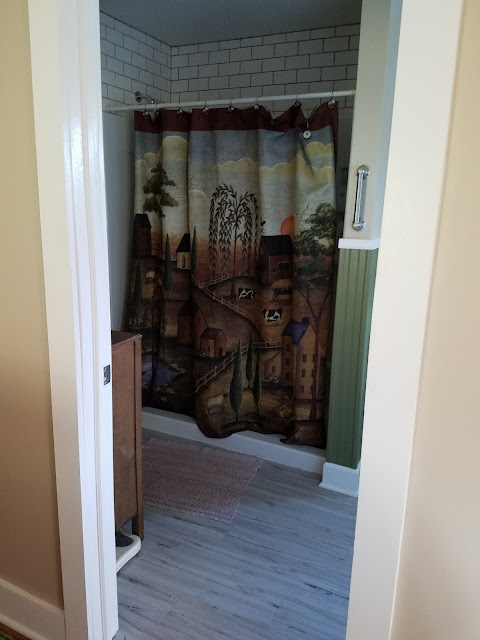 Notice I put a grab bar by the shower. 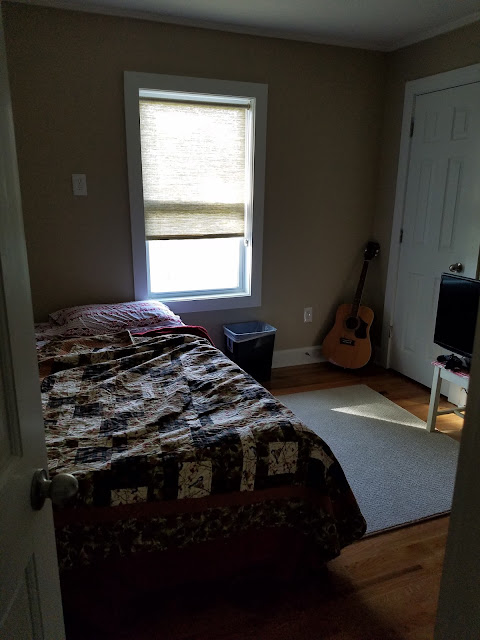 I guess I could have turned the light on.  I put a single bed in the spare bedroom, so there is a little more room in there than before.  There is a dresser out of sight to the right, and this is the room
Chris uses when he comes up. 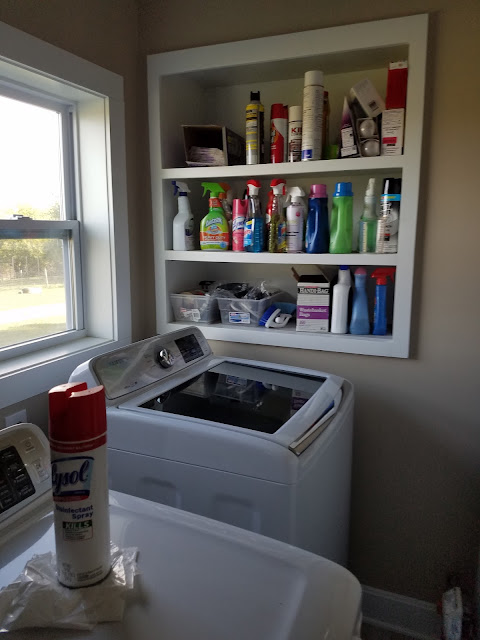 Right before the move, my washer quit working right, and would not work on any cycle but "light".
When I got here, the move had messed up the dryer, and it would not shut itself off, I had to keep track of it all the time.  Once I left, and worried myself sick because the dryer was running.  I came clear across the county to turn it off.  So... I invested in what will probably be the last washer and dryer I will ever buy, a Samsung pair bought at of all places, JC Penney's!

The dryer vent tube needs to be cut down, so it's sticking out a little til my son has time to do it.

The reason I posted it though, is that that neat cupboard that holds cleaning supplies pops out... so that there is access to all the pipes.  Is that cool or WHAT? 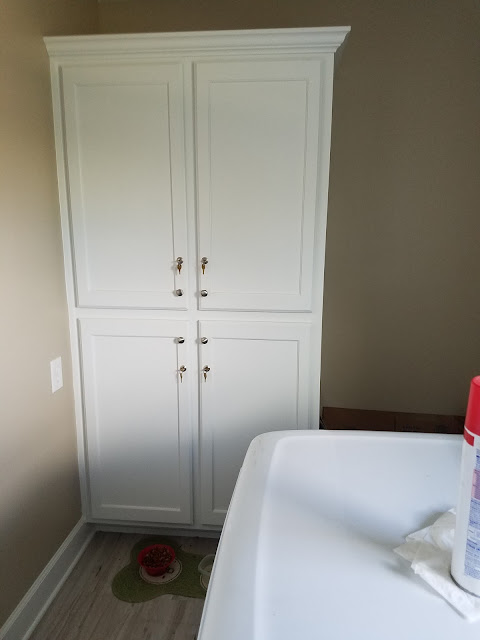 And this lovely cabinet, which can be locked, is
at the back of the laundry room where our pantry cabinet
used to sit... providing extra storage.  Sister's box sits just to
right of it, in the open space you see.

Lavery Woodworks did all the cabinetry in the house.

I almost wish I had had a cabinet like this one put in my bedroom, too! 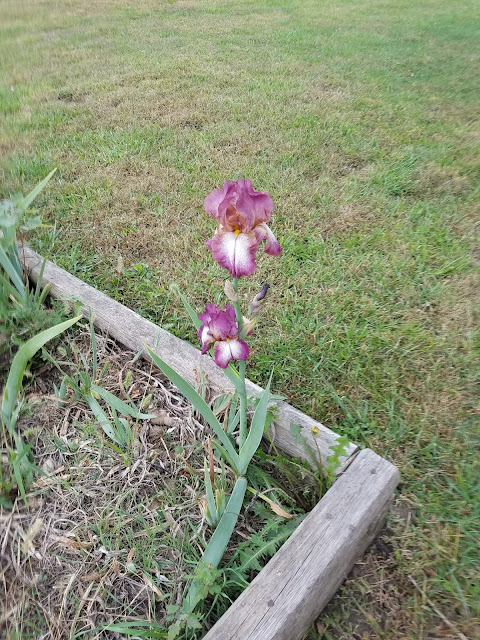