Two Posts in a Week!

I remember when I posted daily!

I thought I would share some more pictures,
as long as I have not gone up the drive today to see whether or not I can get out for a doctor's appointment tomorrow.

It didn't stop the Duckie Boys!

I left everyone else in, including the sheep, because when I
got home from an eye appointment yesterday, I found little Cookie shivering next to his mama
outside in the pen.  Nope, not having that. 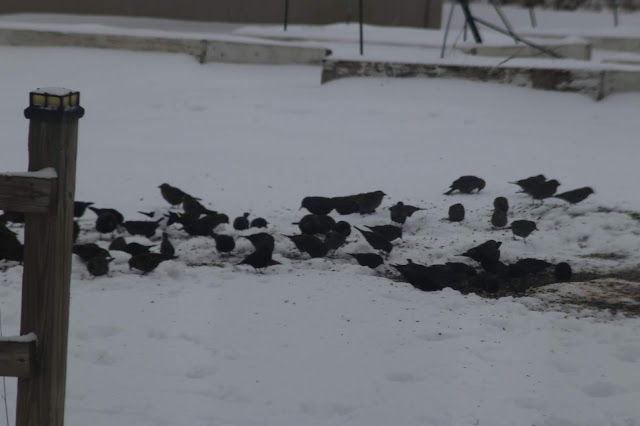 The birds are desperate for feed at this time of the year.
The starlings, especially, have been bad the last week, and believe me, this is only a portion of the hordes.  However, in the midst of these.... are some red-winged blackbirds, and for those of you
who don't know, they are the Harbingers of Spring!!!

My faithful girl did the rounds with me this morning. This is a labor of love for her, as she is increasingly slower and slower. 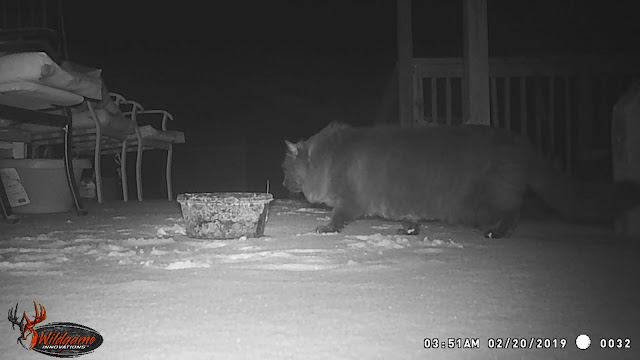 You can see that snow blew onto the porch itself
while it snowed last night, I don't remember that happening very often here.

Rusty was checking for food early this morning.  However,
only one lone possum, and two of the other ferals came to eat,
no raccoons.

Tiny little footprints leading onto the porch.  There is a water bowl there, it was frozen. However, the heated bowl is at the other end of the porch, and I am worrying that no one is realizing it, they are all
so used to looking for it on this end.  Both outlets are now taken up, one with the heated bucket in the sheep pen, and the other, running the lights in the sheep barn.  I am about to go turn that off for the day, but the sheep must stay in.  By tomorrow, some of the snow should be melted and I can maybe let them out again.

I did take some pictures of the goldfinches feeding on the deck, but I believe I have accidentally
erased them! 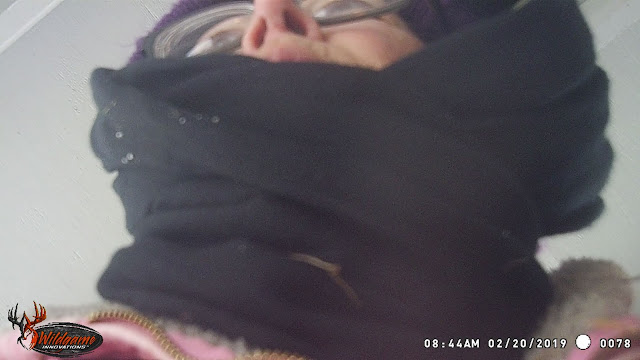 The camera caught this view of me when I laid it down on the
kitchen table.

Yep, that would be about right for the last three weeks.
I am going to dress up again and go out and see if I can shovel the front gate open... and no, I'm not complaining, many people got four times as much snow! 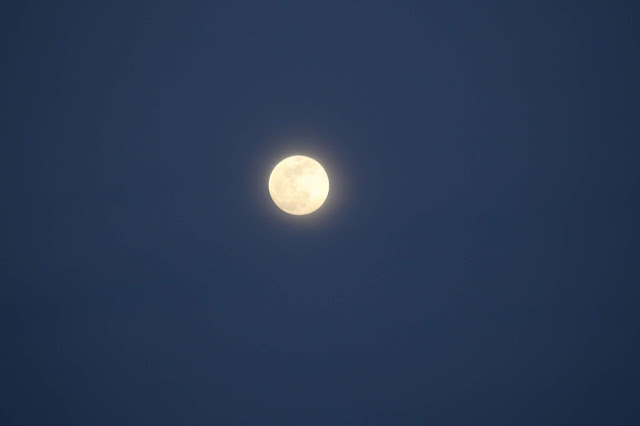 What a Week We Had

Northeast Kansas had a wild ride of weather last week,
from 57 early on Thursday morning (Valentine's Day) to
29 by the time I finished up hauling hay that evening, and a plunge thereafter.

I saw several memes on FB, showing sunny and grass covered ground in the
morning, and snow in the afternoon... true that!

Our latest snow came in Thursday afternoon, and pretty much
shut down the city on Friday, resulting in one forty car pileup (in which
there was sadly a fatality) and numerous smaller ones.

You can see that on Wednesday, pretty much all the snow and ice from the last event had melted. 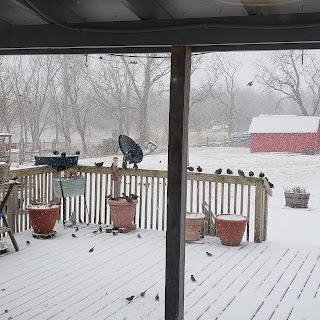 I finished chores Thursday morning, and within an hour, this had started.
We actually got about 4 inches.

We were predicted 3 more for Saturday night (didn't happen)... and
a possibility of five for tomorrow (praying it won't happen).
It's cold out Monday morning, as I write this.
The chickens are in again, as it was only ten above when I trudged around doing chores.

The ducks actually holed up in the duck barn to get out of the wind.
I really felt sorry for them, because they had had several days of being able to
play in big puddles, and eat grass.  I think this winter has been hard on them.

This was yesterday morning, not as bitter as today.

I have discovered something about the ducks.
I have a young rooster, he was Biddy's last .... she hatched a
pullet and cockerel.  This rooster is the spitting image of his dad,
Ferdie.

I call him Buddy, or Little Boy.

He is becoming a terror, and I kept noticing that the duck pool by the
big hen house was clear in the afternoon.  I couldn't figure out
why they weren't using it, and one day, I saw Buddy go after the ducks.
They won't go over there if he is loose.

Their normal place to hang out during the day was under the front porch of the big hen house, near the pool and food bowl.

So... the above pool is near the old hen house (I have about ten pools, large and small, in the barn, but have actually not had to replace either of these despite bitter weather).  I filled it and called the ducks, and they came waddling yesterday to get in.  This morning, they were in their old hangout by the big hen house, and I filled their large fortex and put their lettuce in it, which they promptly ate.
I let them get settled, re-filled this big tub, and put their food near them and left them.

Buddy and his dad are fighting, and I am going to have to re-home Buddy if I can, I think.
He is a gorgeous boy.

This is where he stays on the days I don't let them out, like this morning.
He stays on top of the brooder pen in the big hen house.... so his dad can't get him.  He has water and food, but it's no life.

He does come down when everyone goes out, but he is heck on the hens.

Paiton and Jax spent the night on Saturday night, and Paiton
decorated brownies for us.

She is still riding, even in bitter winter weather.... and is becoming quite the artist, too.
Jax is already practicing baseball at an indoor facility... he can't wait for the season to start. 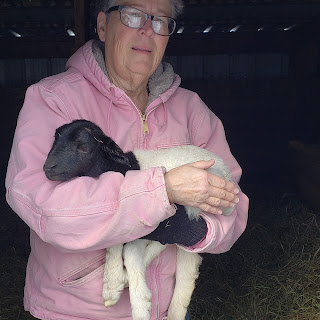 So Saturday, soon after the kids got here,
this happened!

I look worried here, because I was not sure if Flicka was going to deliver
more.... and Jim, my son, was trying to get Fluffy out of the barn and into
the lot, so we could lock mom and baby up alone.

I picked this little doll up and made sure it was dry.
I looked yesterday, it is a ram lamb, and Paiton named him
Cookie, for Cookies and Cream.

Fluffy is butting it around off and on, so I have her
locked out of the barn this morning, to give Flicka and Cookie time to
rest.

Wednesday night, I had run a long cord to the place where Keith had left a
cord looped around around fence, and connected the lights in the barn which we had used for the baby goats five years ago.  (almost six years!).
Both lights still worked, and keep the barn warm.  The sheep were a little scared that first night,
but by the next day, they had figured it out and were lounging inside.  I was so glad I had it ready to go. 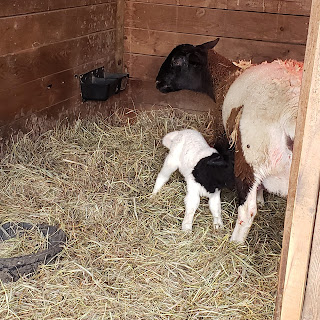 It was just a darn good thing I did it.

I was so relieved Flicka had only one lamb.  I had bought colustrum,
milk replacer, and two bottles with Pritchard nipples (remembering
our goat days) just in case.  I was prepared to bring the third of a trio inside... but... it turned out
not to be necessary, and I'm grateful for that.  So far, she is doing a good job.
I have Fluffy blocked out this morning, to give Flicka and the baby time to
chew cuds and rest after she ate.

I have warm molasses water in there for her, too.

I can't thank my son Jim enough for his help.  He came out two weeks
ago and screwed all the boards back onto the barn which the larger
herd of sheep had knocked off during the summer.  It is not a fancy
little barn, but it is doing the trick.  IF I see Fluffy butting the baby today,
I can put two by fours in the middle channel (if you look in the
above picture, above this one, you will see a channel in the north wall).  Keith put this
in when we had a mini and pony, and the pony was having trouble keeping weight on.
We divided the barn so that they could go in and eat alone,
and we could regulate what they were eating.
To open the barn up again, you could simply lift the boards out.
You can see the pole in the picture directly above this, and I figure two or three two x fours
would keep Fluffy from being able to jump on the side with Flicka, but they could still be "together".

I am locking them in at night, now, and yes, there is a warm water bucket.

I have just checked my phone, and we are almost up to twenty degrees. The "feels like" is still nine degrees, however, so I will leave the chickens in a while longer.  I will go out and open the door to the barn and Fluffy can come and go.  Flicka did come out with her baby yesterday for a few minutes, but then led it back in.

I am keeping Cookie, he will be wethered.  That's it for me,
I can take care of maybe four, but no more.

I do not think Fluffy is bred, though Diablo, the big ram lamb,
was on most of them before the herd was sold.  That was
early November... she would be delivering next month, if she were.  I just don't think so, as she and Freckles were best buds, and they stayed away from the other sheep.

I'm hoping she is not.

The girls are rocking it here lately!

When my son came out to get the kids yesterday,
we talked about plans for summer.
I am going to make pickles, I have not done that since 2016, the year
Keith died.  I planted a straw bale garden that year that did very well,
and I had an abundance of pickling cukes.  The kids love sweet pickles,
so this year, I am going to try picking them as babies and making sweet
gherkins.

I am going to sit down today and work on my seed orders,
as the big shop (barn) is ready for me to get set up to start seeds.
It's hard to think of it when you are trudging around in the snow.

I just went out to let Jester out, and saw legs going around the side of the hen house.  I grabbed the porch food bowl and went out, it was Petey, the tamest of the ferals, looking for something to eat.
I usually leave a bowl just inside the hen house, but it is not open this morning.

I called to him, and he started to go away, he IS feral, after all, and then realized it was me.
He waited, and I put the bowl down and he came back to eat.
As I stood up and started back to the house, I realized it is spitting snow.

I'm looking out now and see it, and I'll watch the noon news to find out what is going on.  I have an eye appointment in the morning, my diabetic eye appointment.

I think I am going to slip boots and coat on and go let
Fluffy in the barn.

Everyone take care... spring is just about thirty days away!