On the Porch at Night

Friends, most of you know that I took in four feral kittens last year,
and raised them in my little red hen house on stilts until the raccoons sprang them.
They were the reason I had the feral cat feeder in the pasture built.
(the one that was "raccoon proof")

Three of them did learn to use it.

Since then, I have been keeping a bowl of cat food on the
side deck of the hen spa, the big hen house, and another
bowl on the front porch of the house, where I have a heated water bowl.

Uh huh.  I took that through the front door window last night. 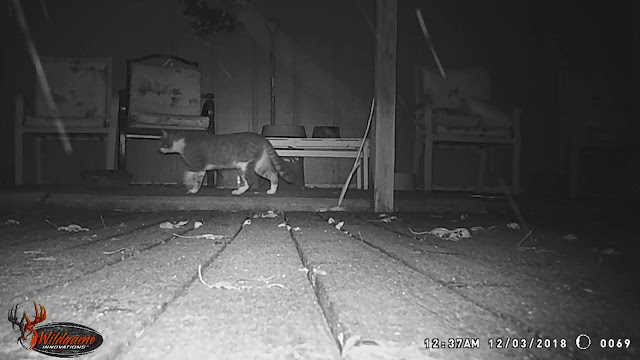 Petey, who, as you can see, is in fine fettle, checks the porch regularly,
even though he, of all the ferals, eats canned cat food as I lock up the
hen spa each night. Petey is the only one who will let me handle him. 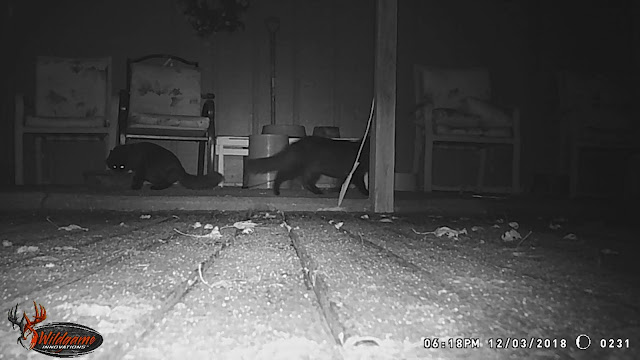 Both of the black kitties (they were the two boys of the original group,
which was all spayed and neutered) are still alive and in good flesh. 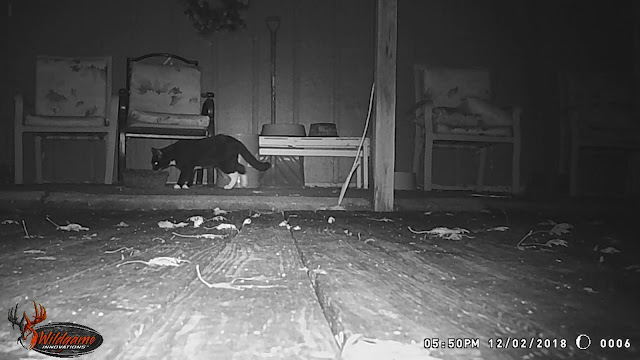 Their sister Harlequin, Harley, is still doing well.
It was Tippy, the other girl, who has disappeared, but she
disappeared early on, soon after they were loose. 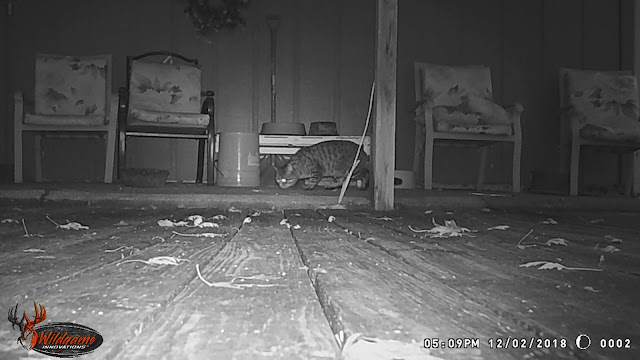 And here is the gray tabby, the fifth of the ferals eating here.
He is also the wildest. 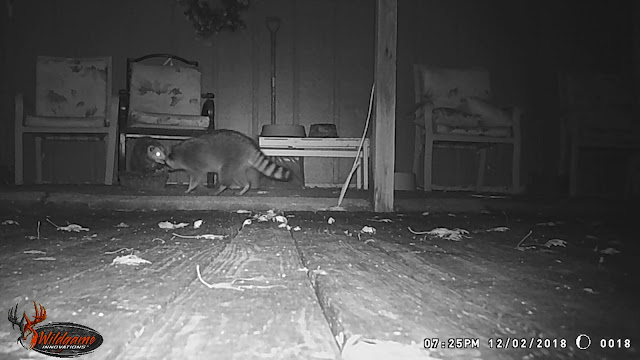 Some of the raccoons are HUGE, and I can see why they killed my ducks. 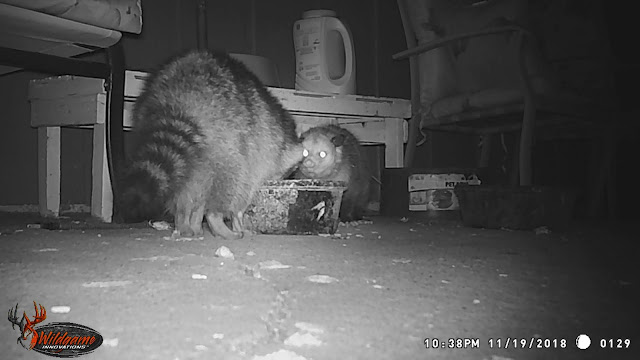 This was not from the last two days, because I erased the one I wanted, sadly.
But you get the picture.
The funny thing is, the cats and possums pretty much co-habit. 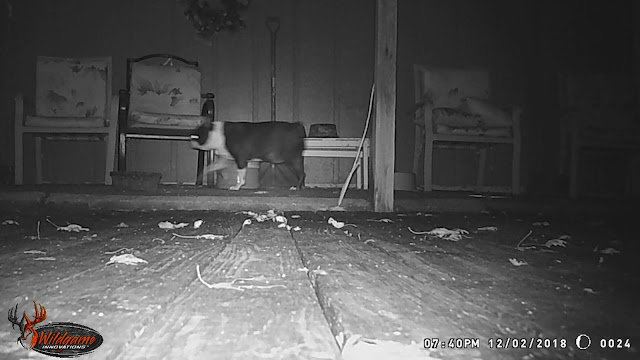 Jes goes out several times every evening to go to the bathroom, but
I do not let him go out alone, I stand in the door and watch him.
Our tenants lost a little dog while they lived here, they let him out alone.

Not taking any chances, even though Jes is a chunk. 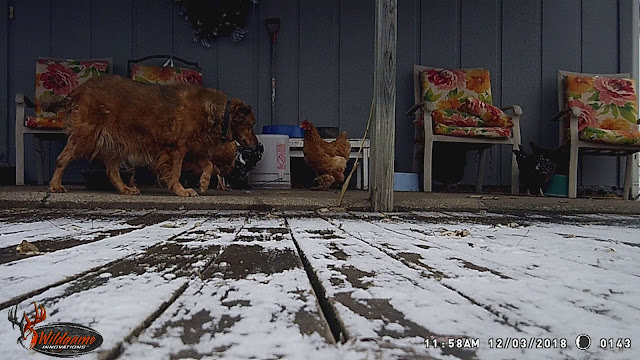 Lilly had her own drama with Buttercup the cochin.

I should note that as of the last two days, the starlings have found the
feeder on the porch.  You see, the cats come and check it during the day, so
I have been leaving food in it for them.  They don't bother the chickens, they
just come and eat.  However, I can't afford (literally) to keep filling it over and over
because of the starlings.  I have had to quit filling the feeder in the pasture in the morning,
because the starlings were eating all of it.  I wait until about 3:30 or 4 now to fill it for the night.

The starlings are wiping out the feed on the hen spa porch, too, along with the crows and the chickens, but I am still trying to keep a half bowl in it in case the cats drop by (and they do).  I have a theory that the cats use the water fountain (that has a heater base) in the hen spa for water during the day. 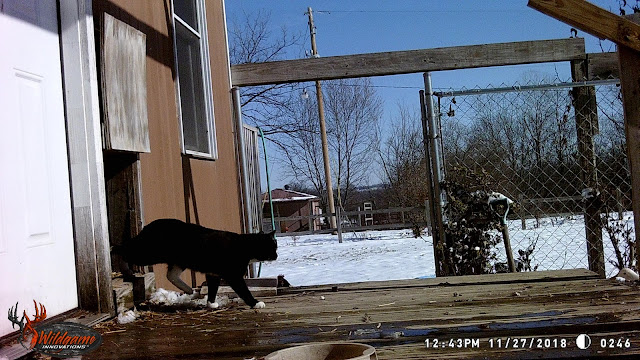 And there is Harley on camera coming out. 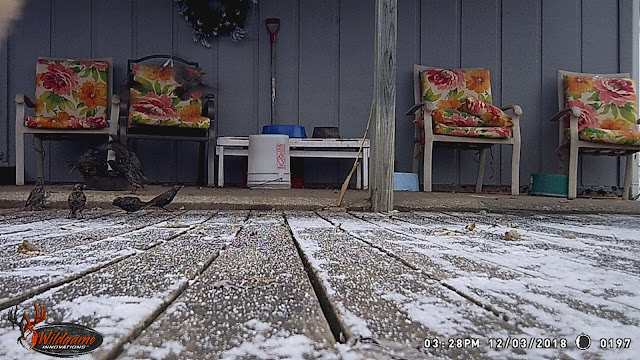 And there are the starlings eating cat food on the porch.
(you can barely see them clustered on the rim of the bowl)
Ugh.

I have tried now for two weeks to get an electrician here to activate four outdoor outlets, so I can
put warm water down in the garden area, but I am having NO luck getting anyone to actually come.
Too cold, I am sure. 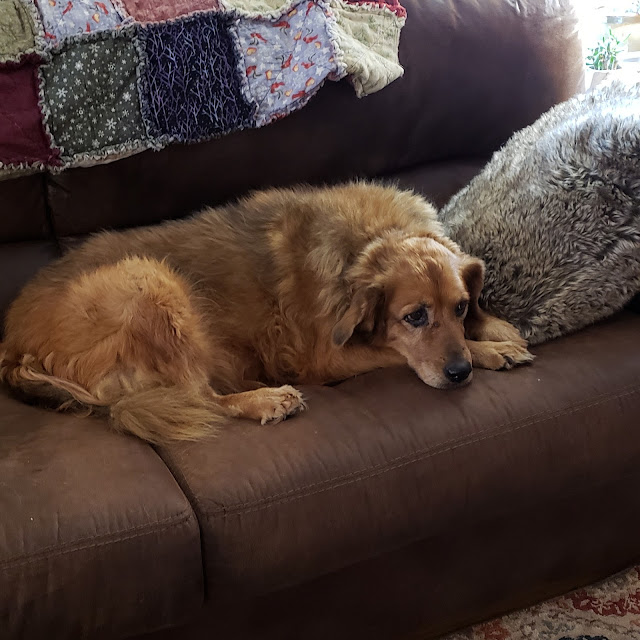 Lilly amazed me last night and got up onto the couch in the living room.
She has not really been able to do this for months, though she does
manage the lower loveseat in my bedroom.  I think she just wanted
to be with Jester and me in the evening, instead of back in the lonely bedroom, where she usually sleeps.

Christmas has commenced at Calamity Acres!