A Month Flies By

Friends, we are still here.

I, who posted daily in the early years, have been so neglectful of this blog.  I will try to do better.

It is a wonderful record of the things that have happened here at Calamity Acres, and I will remind you, there is a tiny "search" window that expands when you start typing... if you type in "llamas"... "Geese"... "turkeys".... "goats"... etc.... you will bring them up.

Things have been changing here.

First of all, Wilber and his partner, Mama, went home.
Their daughter went to her new family in late July.
Then, Mama mourned for three days... three days of bellowing like a human mother, it broke my
heart.  It convinced me that I rightly could never raise animals for sale.
She began jumping the fence into the yard.
(She is laying down in the shade near Wilber in that picture).

There she is in the yard on July 22nd.  Unfortunately, it was during the county fair, and no one had time to work on fence to fence off the low spot, so they just took her home, along with Wilber.

We opened a new exhibit at the National Agricultural Center.  It is
made up of WPA portraits from the 1930's.  We think we have it bad... those poor people had nothing, and the Dust Bowl drove them from their homes.

As frightening then, as the fire storms are today.
What is our world coming to?

This is one of the four ferals here, Yeller.  He is a male, an older kitten, unneutered, and not one that came from the agency for which I foster.
He will have to be trapped, at some point, and neutered.
He is trying so hard to trust me. 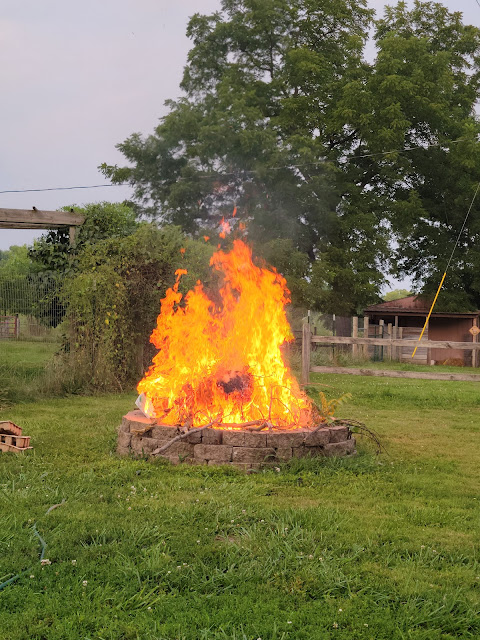 I have to tell you that I am petrified of fire.
I burned our terrace as a ten year old, and my uncle, a fire chief,
was called to come over and talk to me.  I did not touch matches for MANY years, I would not
burn the trash in the trashburner behind our house.
This is the second time I have had to burn debris, and I was careful both times, there is a hose hooked up, ready to go if needed.  I did not use any starter fluid, either.
Now I know that I can do it.

They're baaacccckkkkk.
I wish we could fast-forward thirty days.
I did not get a garden tilled this year, my helper worked full time this summer, and
for various reasons (life) was never able to till for me.
I will have to buy pumpkins.
Next year, I will hire a service to mow the yard and do all the trimming, I can still mow, but
I cannot handle a heavy-duty weed eater.  I will handle the pasture.
We have had a terrible period of high temps.... heat indices over or near 110F.
Two weeks ago, I called the owners of the lambs in my pasture... one lamb was in distress, and they came and got her and took her home.
Sadly, on Tuesday, I found two lambs that appeared to be laboring in the intense heat, but they were in the shade, next to a pool of cool well water.  I took food to them and they did not eat, but one got up and walked away.
I checked on them at 5:30, and found one dead.  The other was with the other lambs... I called the owners immediately.
They arranged to come get the lambs on Wednesday morning.
As I went out the door at 6:15, I saw a white form in the pasture.  My favorite lamb,
Number 71, was dead also.  It broke my heart.
Needless to tell you, there were hurt looks when they got here to get the lambs, living and dead.  I don't think my pasture will ever be used again. (I am sure, in fact)  I did remind them that I had had lambs, goat kids, llamas and their crias (two crias born here), mini-horses, big horses and had never suffered a loss. BUT.... that is not to say that the birds did not bring in some terrible noxious week that made the lambs fail.  They appeared to be fat and healthy.  Again, it broke my heart, especially the gentle lamb that followed me around like a dog.
I have not lost any hens, so far, but I can tell the older hens are really stressed out.  I am putting
frozen bottles in the waters daily, and checking for fresh water constantly.
Right now, we have a big storm over us, but I am literally on the edge of it, and though it is dark on the east side of the house, it is light on the west, so I think it will miss me.  I have most chores done, all the water done.
We are getting respite tomorrow for a few days. 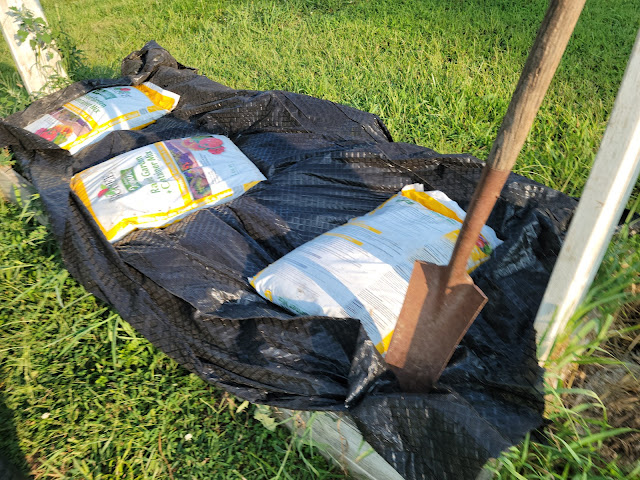 Tuesday, I took landscaping fabric and covered the long bed
(one of two left).  I put dirt bags on it to hold the fabric down and kill everything.
My plan is to dig up the surviving lillies, iris, and day lillies, and put them all in this long bed.
I have one other longish bed that needs to be covered, too, and I will go out to the shop tomorrow and
look for the other roll of covering, and then put more bags on it. 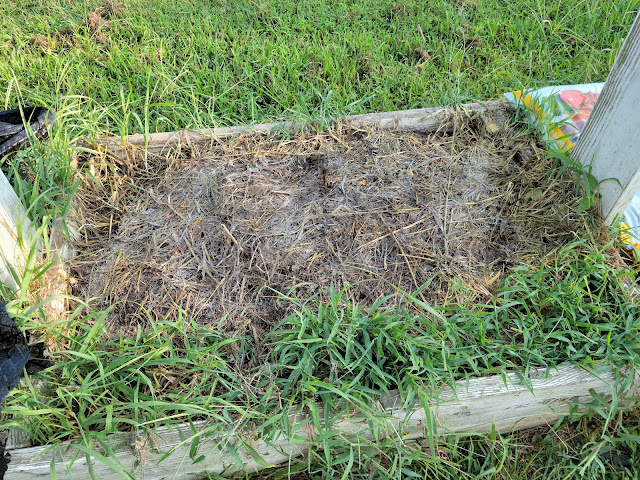 The dirt bags had been laying on it for several weeks, they did a great job of killing everything.
I am hoping in a few months, I can dig the beds out and put the fresh dirt in, and start moving plants. 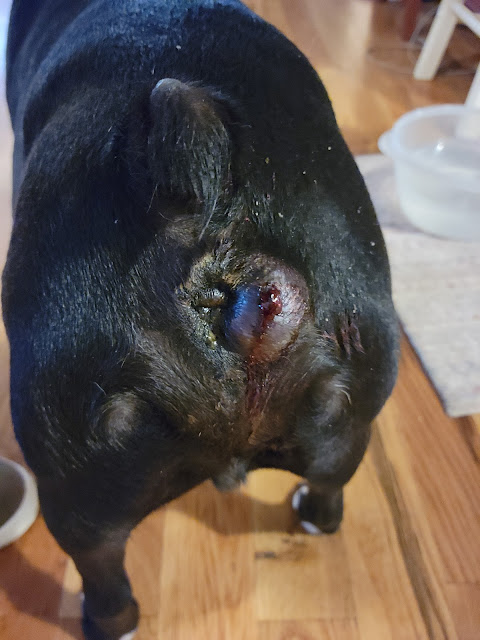 Saturday night, my boy Jes got up from the floor next to my chair, and I looked down and saw blood dripping.  I had not realized he was swollen along his anus, and I went into high gear.  My phone was
not working right, I went next door to call the emergency vet, and loaded Jes and went there (about thirty miles away).  By the time we got there it was 10:30, and by the time we were in with the doctor, almost midnight.  I was told it was a two to three hour procedure to repair a ruptured anal gland... so ... I left him overnight, and went back Sunday.  He will have to be expressed every six weeks from now on, and... we will see our vet for follow up on Monday morning.
How I did not notice his discomfort, I don't know, but... he did not scoot, he did not rub against anything.  I cannot believe I didn't see it, it hurts me to know he was in such discomfort.
The emergency vet explained it is a common problem with dogs.  Jes is still on penicillin and pain meds (for another day) and he is getting along fine. 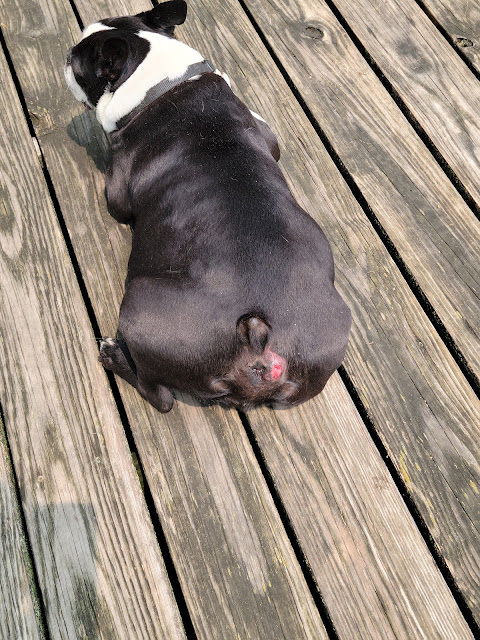 You can see it here, but it has started healing over.
He only gets to go out for a few minutes at a time in the heat.
I am sitting next to a window, and it has gotten very dark out, I am going to go take a look!
No rain.  Literally not even a drop.  The storm really did go east.  It is still dark over there.
We did drop about ten degrees.  I watered the flowers, so that means the 20% chance of rain tonight will materialize.
So, now a bit about the feral cats. 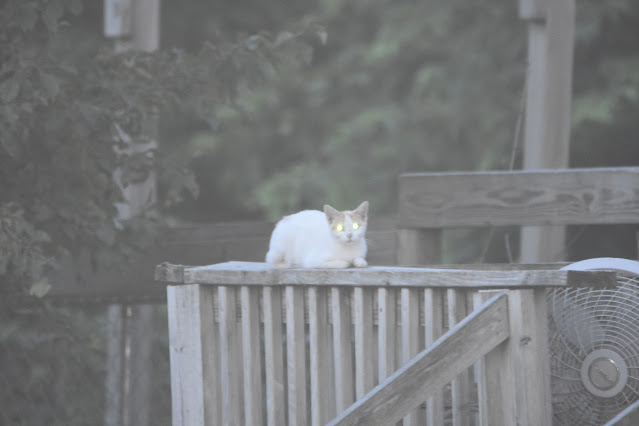 Here is Wanda at daylight, she of the hissy fits in the Little Red Hen House.
She was watching for me to bring her breakfast out.
I mean, they are supposed to be feral.
When she sees me with her green feed bowl, she jumps down and runs for the shop.  She is on the  upper rail of the big hen house, where she can see across the yard.
I go out at 5:45, and feed the cats and the wild birds.  I'm a sap. 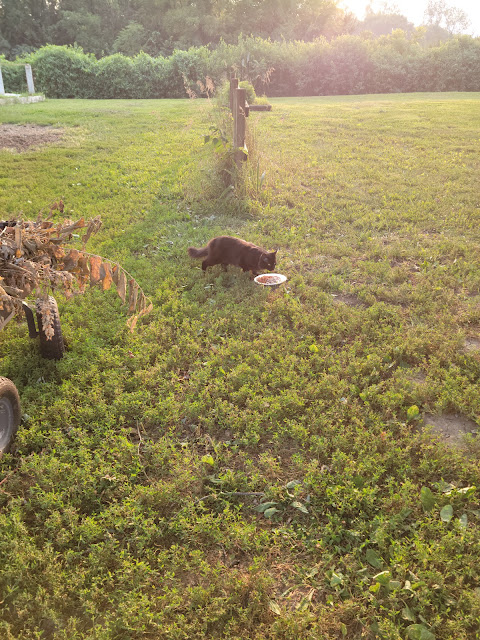 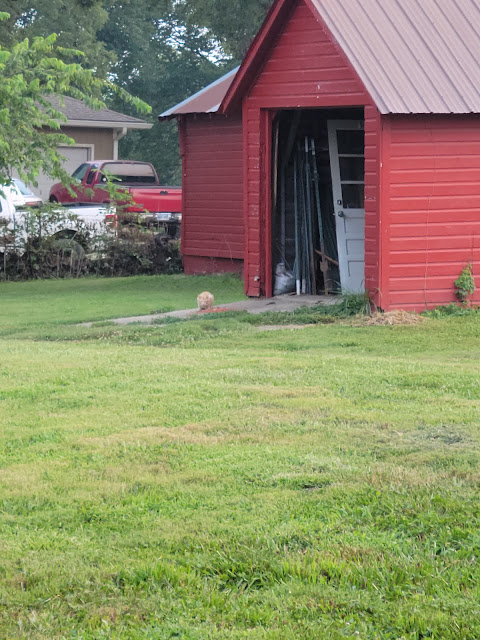 That little yellow dot is Yeller.  He is not fixed... he appeared out of no where.
I am hoping to trap and get him neutered.
He actually will let me get about four feet from him now. 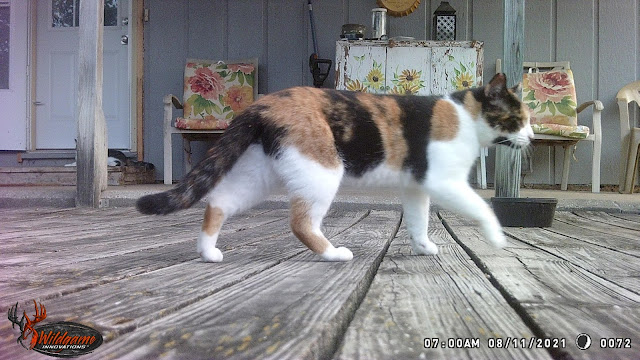 The beautiful Cleo, who came after Wanda.
See Molly laying at the door?
Cleo will not come near me... at least not closer than six feet.
She waits every morning at the fenceline in the yard, watching the door.  So, this morning, I had Cleo watching from the right, Rusty on deck at my feet.... Yeller by the old garage, and Wanda did not know I could see her on the steps of the big hen house, until I called to her.
She ran for the shop at that point.
My neighbor across the road called me two days ago to ask about Cleo, she thought she had been
injured in some way because of the way she was walking.  I looked at a bunch of pictures of her on deck, and I don't think so.
I confirmed that tonight, she is eating some (cooked) chicken out in the garden right now. 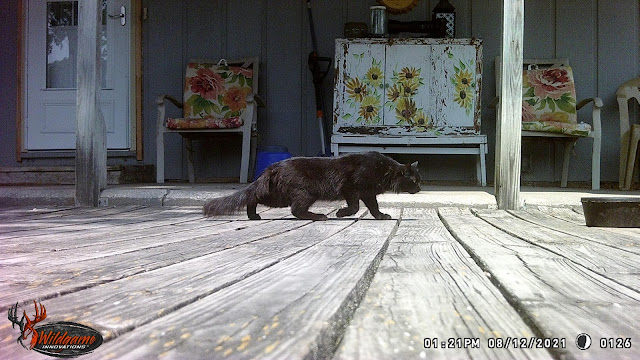 Rusty is actually the one I am worried about.  He looks unnatural here.
He hid under the car all afternoon (but, it WAS hot)... I took his wet food and dry food and water to the edge of the car for him.  He is gone now.  He just does not look like he is walking right, so I will keep an eye on him. 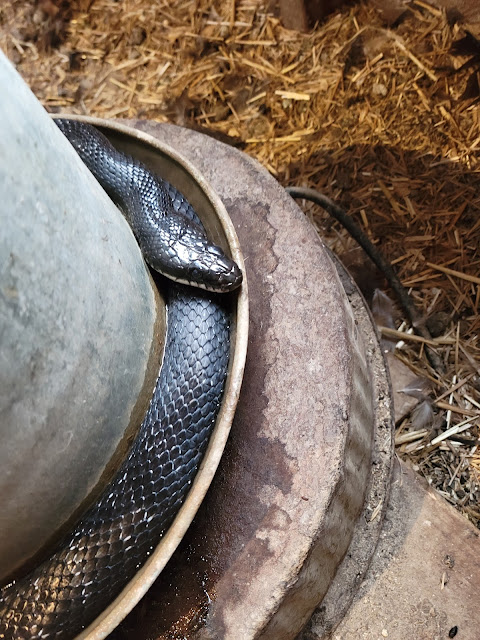 Like I said, it was hot.  This poor snake was curled up in the water fountain in the big hen house.
Not the first time I have seen it, either.
Everyone should have a better night tonight, the temp dropped by ten degrees or more.
I am going to go lock up.
Folks, the Delta variant is rearing its' ugly head here.  Two of the people with whom I volunteer received calls that they had been exposed.  Both were tested, one Monday and one today.
Because I had been around the second a lot, I went and had a swab test tonight.  I have had my Moderna shots... but I worry about breakthrough infection.  There are so many vulnerable people, I wish we could all draw together to protect each other.
No more pontificating.
Think FALL!
Take care of each other. 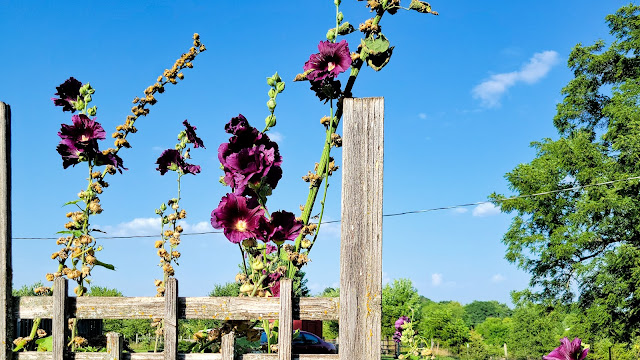