I have been trying to make at least one weekly post, but I sure missed last week.

I'm going to make it up to post Covid tiredness, still, and believe me, it's real.

The doctor tells me it will be some time before I am back to "normal".

I am feeling much better, but I realize I have to stop and sit down from time to time while I am out working.

I am going to go out shortly and cut down the tall grass at the top of the pasture. There is a growth there that came up when the sheep went home... and I need to trim it back.  It will also help the camera out there be able to take better pictures of the wildings. 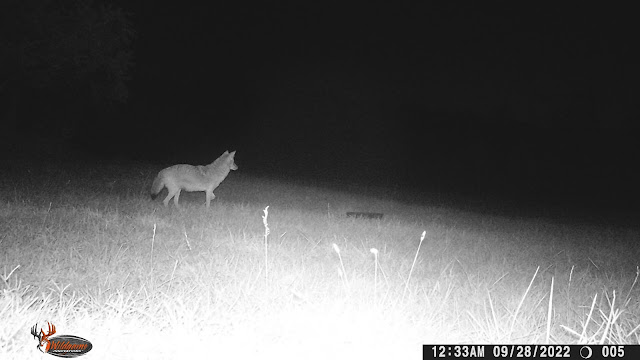 There is a classic pose of a coyote on the 28th... looking at the fortex where I put food scraps, etc. 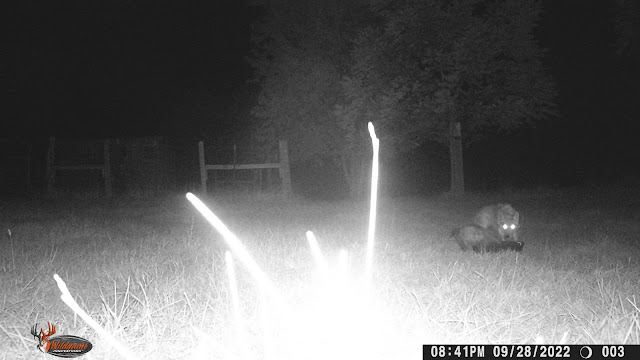 There was a disagreement between the coyote and a big possum. 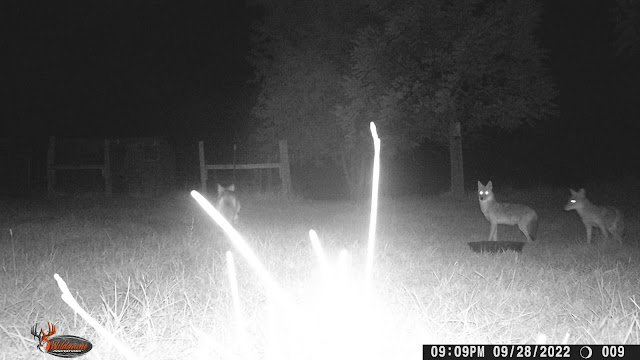 The possum gave up when reinforcements came.
I suspect the fortex was actually empty at this point. 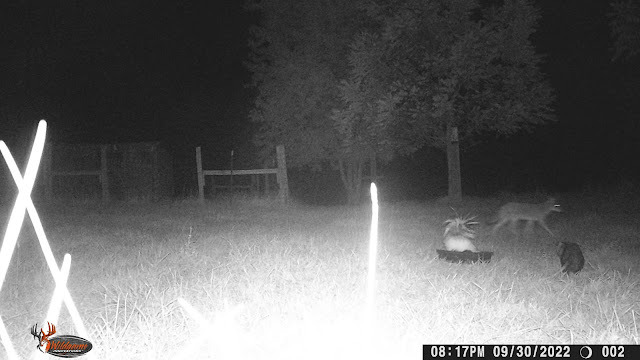 And then, for two nights in a row, a creature I have not seen here in MANY years appeared... a skunk.  It let the other animals know in no uncertain terms that the fortex was his!
See the tail? 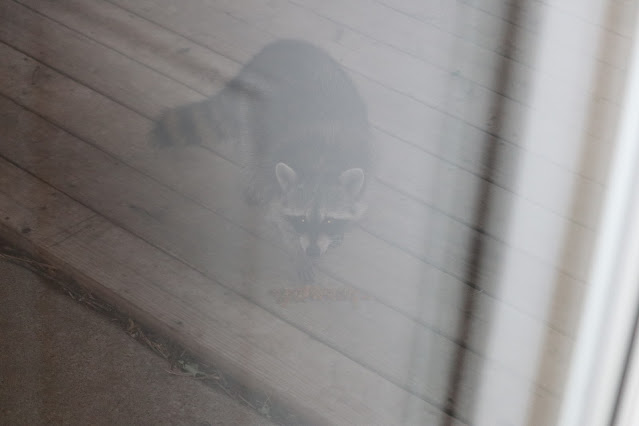 This very bad view through the kitchen door was taken last night, when one of my visitors came to eat cat food.  I had brought everything in, but Mama had been out there a few minutes before, and I took a small amount out and poured it for her.
Here is the rest of the story:  I went out, sat down in the chair to the left of the door, and talked to that raccoon until it finished eating all the cat food, and left the deck through the railing just behind it.  I swear to you, they are not scared.  I did not have my phone with me, or would have taken some pictures. 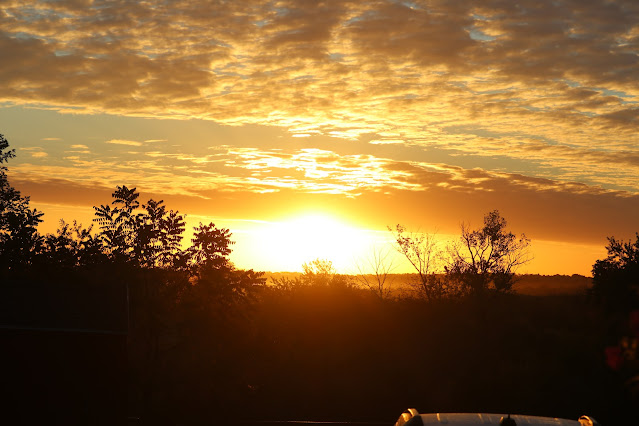 Sunrise on the 26th. 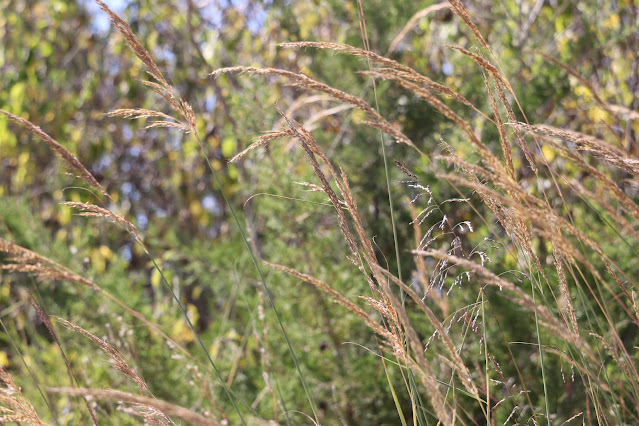 The roadsides are becoming beautiful.  The Big Bluestem waves in the wind. 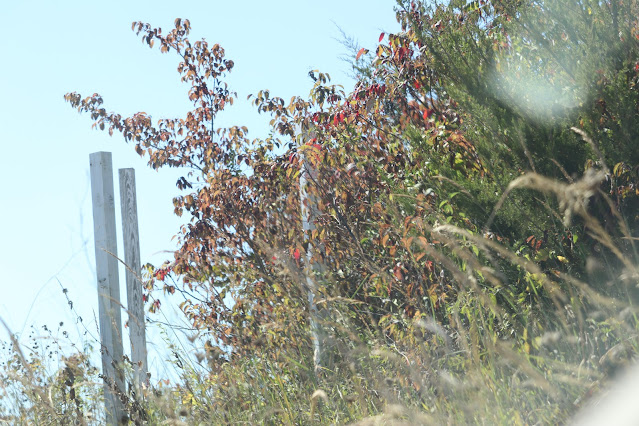 Sumac is beginning to turn, too.  I had the camera with me when I went to do an errand this morning, but did not stop to take pictures of the trees beginning to turn.  I'll try to do it later.
I am hitching up my little wagon to the tractor to pull some bins over to the storage building... it's finally time to put the summer clothes away.  Two weeks ago tomorrow and Tuesday, it was 100 degrees here.  Right now, it's 72, and the overnight lows were in the 40s. 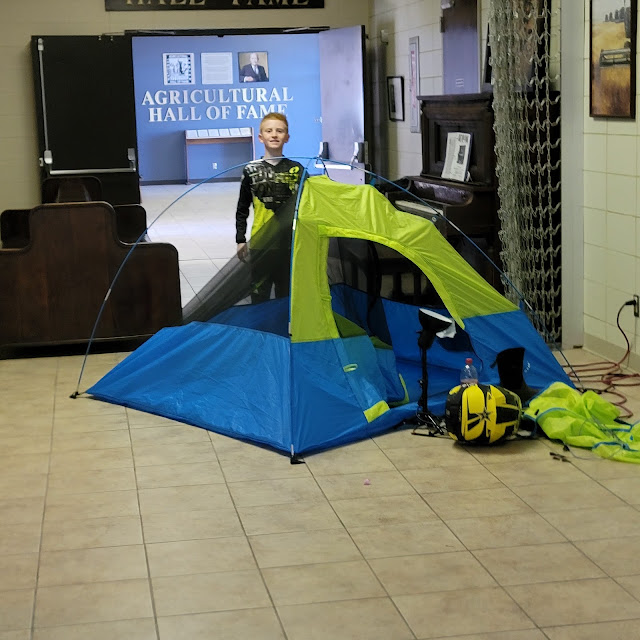 My Saturday co-worker at the Ag Hall (The National Agricultural Center & Hall of Fame) is Wayne.  His grandson Brayden has practically grown up there.  He had not been able to come over to Grandpa's for a month, and yesterday, he spent the day with us.  He set up his tent in the lobby and had his fourwheeler there, he was in and out... but he is so helpful because he knows where everything is and can answer questions when people come.  I can also run in the restroom with him there because he can let the people know I will be back in a minute!
He's a big help! 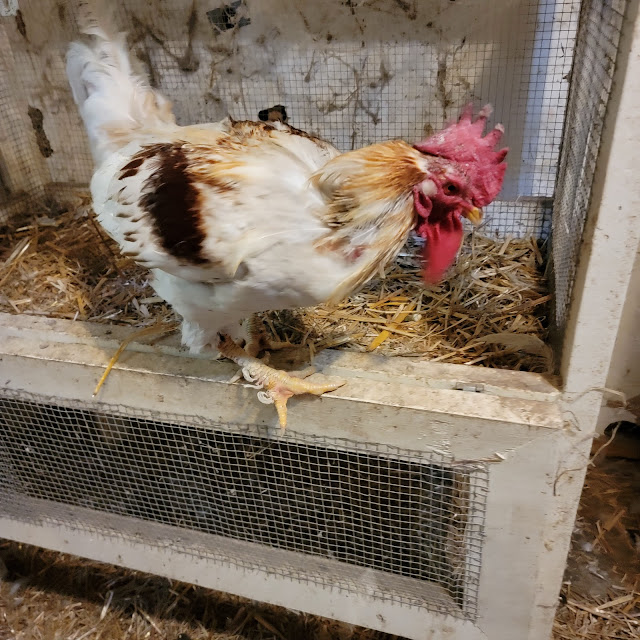 My poor old big roosters.  Singleton, here, has quit roosting.
He flies up into the open brooder pen in the old hen house every night now, and sleeps in a little nest he has made.  He is actually the dominant rooster of the three big ones, but I noticed last night his poor old tail is almost gone.
There are only two hens left in this hen house, and one never comes outside any more, but spends her days in solitude. 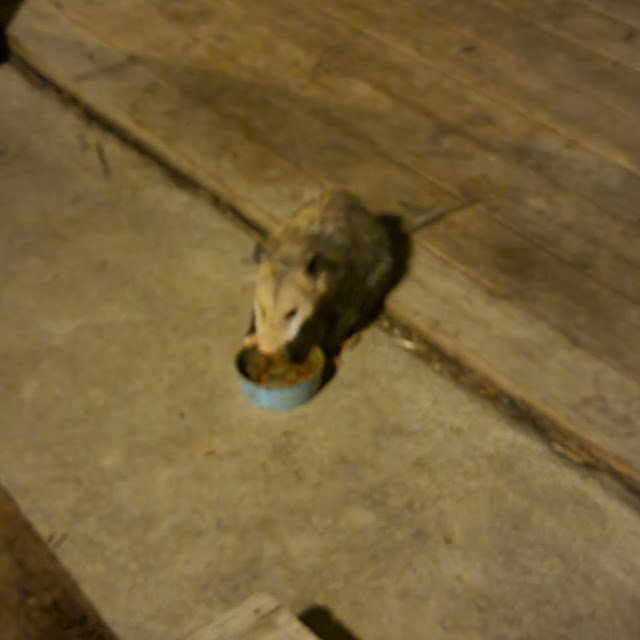 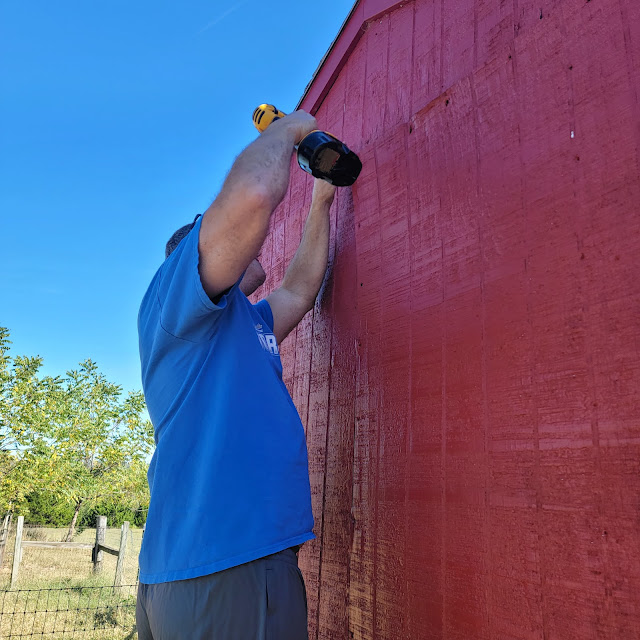 Son Jim came out and did some maintenance on the little hay shed, but.... the siding all needs to come off and be replaced, Keith did not build that for longevity.  I would give anything for Ben to reappear for a week.  I should have had him take the sides off and rebuild it.
Jim did the best he could under the circumstances. 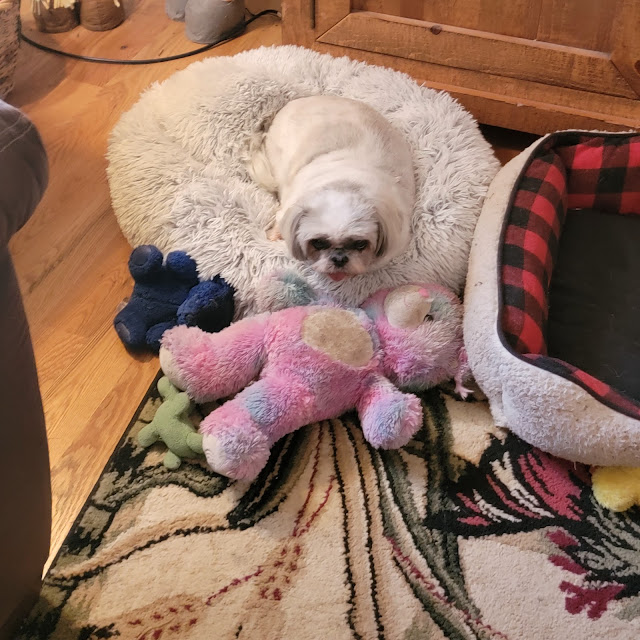 Zoey has been here almost a year now.  She saw the vet this week, and got a
clean bill of health except for worn teeth.  She will be due for shots at the end of the month.
She is my barker, and lets me know when something is amiss.
And now we come to.... 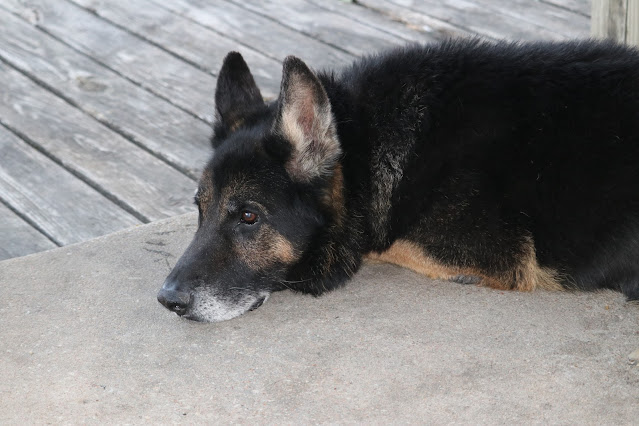 Buddy, or BigDog, as I call him a lot of the time.
Buddy is a foster for Bonner Animal Rescue, from whom I adopted
Fritzie and Zoey.
Buddy was found in the county on Labor Day, starving, nails overgrown, in very sad shape.  He was still wearing a chain collar.  His first pictures were very sad, and no one came forward and claimed him.
The wonderful ACO in Bonner, Officer Kendra, drove out and picked him up.  She had him vetted and they found he was underweight and had a UTI.
He has all his shots and a chip now, and last Tuesday, he was neutered.  He has been here about three weeks.  He has gained weight and is happy and healthy.  He minds you....and, unlike our beautiful Ranger that Keith and I had... he does not bark.  He is able to stay crated when you need him to, and goes right in.  He does have to go out frequently because of the UTI, but not as much as that first week.
He still has it, when he was neutered they checked... so we are now doing stronger antibiotics for a couple of weeks.
He is a senior, purebred GSD. 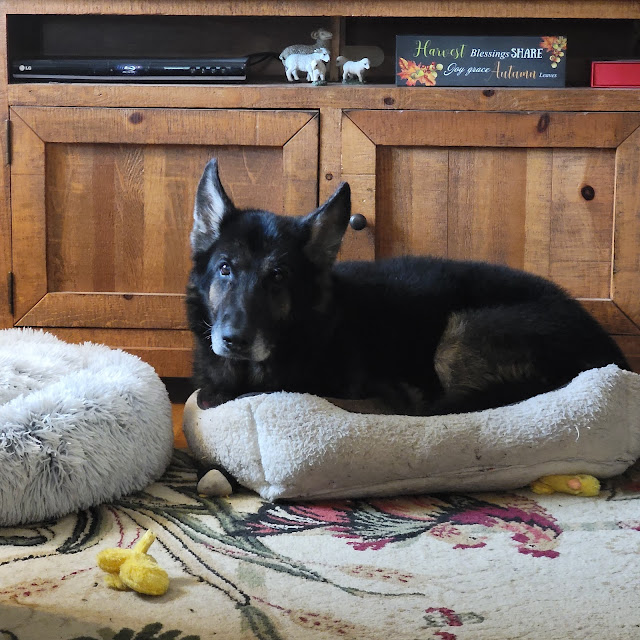 He is good with the other dogs, with the cats, and with the chickens, whom he ignores. 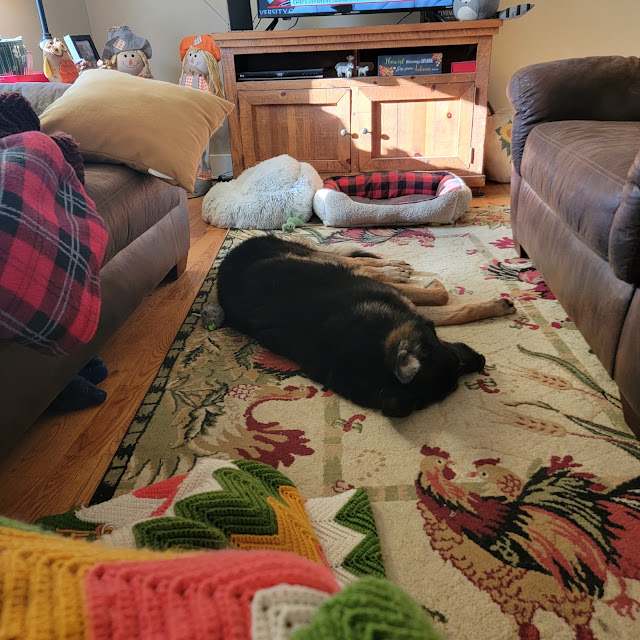 Many people were interested in him that first day when the finder posted him on Facebook.
I am hoping one of them will step forward to give him a good home when his adoption
availability is announced.  Everyone assumes he is staying here, but I am not able to take another dog right now, though I will continue to foster. 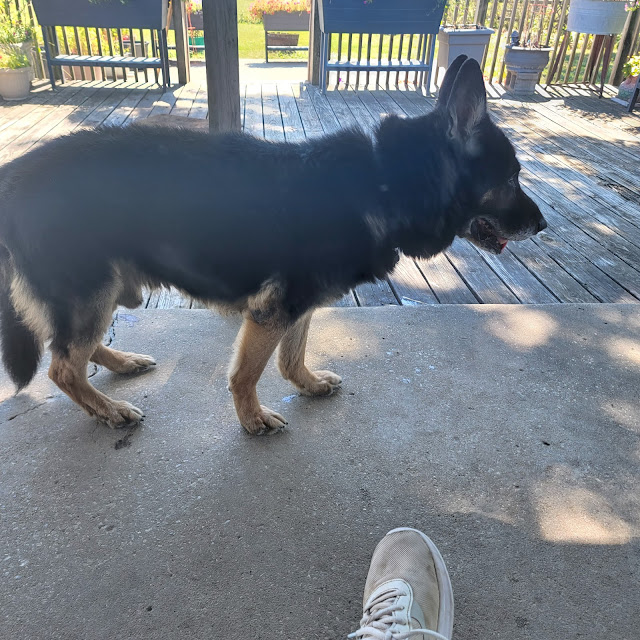 (Taken the first day he was here)
In the meantime, he can just stay here and grow stronger and healthier.  I truly believe someone will want this beautiful old boy and give him a good home. 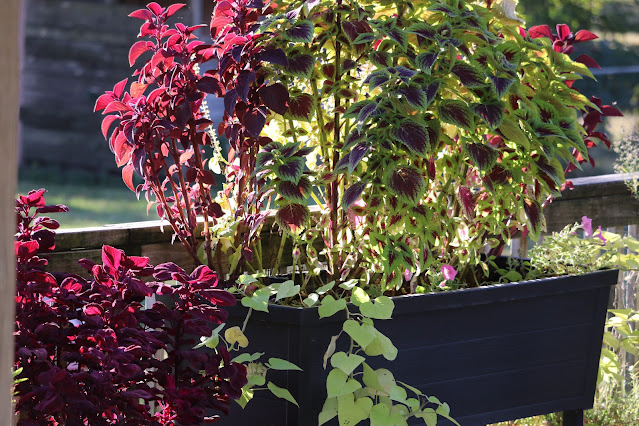 Though leggy, I am still enjoying the coleus.  I will plant more next year.
I am going to stop here and go out and do a little work on the tractor.  I hope everyone is having a wonderful start to their month, and I hope we are all praying for those poor people who have lost everything due to the natural disasters in the south.  My heart goes out to all of them.