One More Big Branch to Bring Down 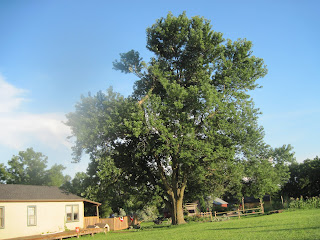 The over-a-hundred year old Maple by the porch also sustained damage, losing many small branches that evening, and one huge one within the tree.  Troy, who has trimming experience, will climb up with a friend and safely lower the limb to the ground, so it won't come down on us, the deck, or the dogs.
Posted by Mary Ann at 2:26 PM No comments:

Kathy and Troy Survey the Damage 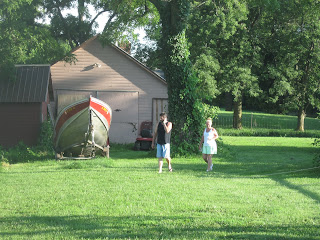 Once the lines were up, our neighbors came over to survery the damage and assess the big tree for firewood.
Posted by Mary Ann at 2:21 PM No comments: 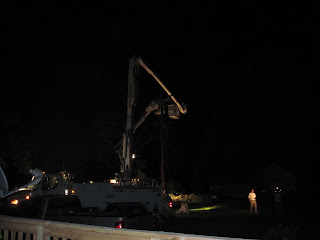 Dan Weinbaum from Channel 9 speaks from our yard about the great job being done by Westar lineman to restore service.
Posted by Mary Ann at 12:10 PM No comments: 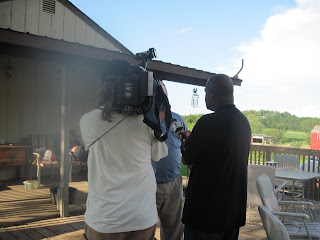 Johnathan Carter from Channel 5 did an interview with Keith on the deck about the mighty old maple going down.
Posted by Mary Ann at 11:56 AM No comments:

An Old Tree Goes Down

A week ago, we had some excitement here at Calamity Acres.  Sitting on the porch one night, getting ourselves prepared to go to the local T Bones ball game, we were watching dark clouds that were rapidly advancing.  The wind began to blow, and the things on the deck to move.  I glanced across the road and saw dust (or something!) rising into the air, and noticed it was coming up from the road, too.  Keith stood up and yelled "Let's get in the house quick!" and we grabbed the dogs and ran in.  He had noticed the over 100 year old maple by the porch begin to swirl upwards!  As we stood in the kitchen (directly under this huge tree) the windows sucked in and out and rattled.... and something began to pound on the roof.  As quickly as it happened, it was all over!  He ran to the window and looked out and exclaimed "Oh NO! - the big tree by the henhouse is down!  The wires are all down over the yard, and the lightpole is snapped in two!"  I ran to look out as he called 911.

Within 4 minutes, the first of our township volunteer firefighters was in the driveway, assessing the situation.  Behind him came a firetruck, another volunteer, a sherriff's deputy... all within six or seven minutes.  The wires carried the voltage for the whole side of our road, and everyone's light's were out, and were dangerously draped across our truck and garden.  Within fifteen minutes, Westar Energy arrived with three trucks, and set about professionally handling the situation in the sticky heat.  Behind them came reporters from local Channel 5 and Channel 9, to interview us for our fifteen seconds of fame, and then set up and stay for three hours while they monitored the situation.  With dispatch, a new pole and transformer were obtained, set, lifted, a new light, yellow now instead of our old white farm light, and by 11 PM, the lights were on for the side of the road, except us, who had more to repair.  Grandson Chris and I slept at the neighbor's in their cool house, while Keith roughed it with the four dogs, who were all upset by the hullabaloo and heat.

The next morning, Saturday, our local electrician Mr. Shilling sent Shawn, who has worked at our house before, to repair the damage to the roof, etc. and lines, and once he had it repaired, and despite many other people without power, Westar sent someone to reconnect us to the grid and the air came on, for which the dogs and I were eternally grateful!

Neighbor Troy has cut the old maple up to use for firewood, and eventually we will get the branches hauled down to the bottom of the pasture where they will join the brushpile to provide shelter for small animals and birds, so good has come from it's loss.  We have still to get a huge broken branch removed from the maple by the deck... the one we feared would come down first of all the trees.  The old walnut still stands, too, though it is hollow inside, and many branches are dying... and many came down in the brief storm or tornado, or whatever we experienced.  It was scary, whatever it was! 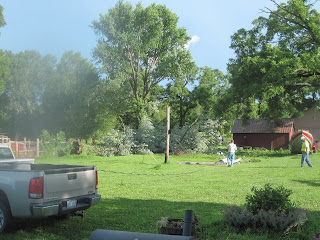