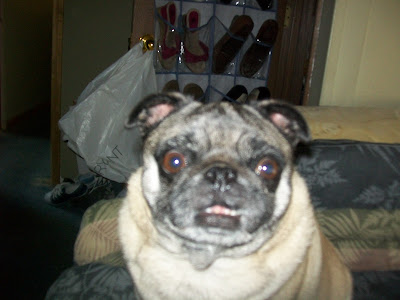 Addie Mae, adopted from the Leavenworth Animal Control, was brought home by Keith who had gone there to find her in between two cages of BBDs (Big, Black Dogs) who were barking wildly.  Addie looked up at Keith as if to say "Get me out of here, will you?" and he just had to do it.
She was a loving little girl, and had to have major surgery three days after we got her home.
What a grand introduction to pugs she was, even though we were only priveleged to have her for three years.  She died far too soon, in April of 2010. 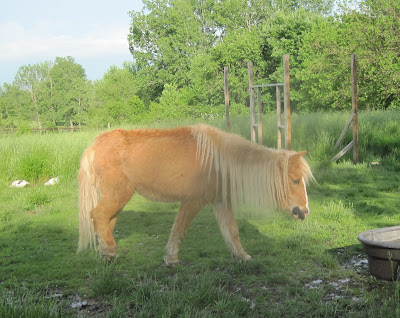 The best Shetland Pony in the world, and we got him free, a gift from a Naval family getting shipped to Virginia for their next posting.  We were so grateful to them!  He was the gentlest, kindest old boy you can imagine.  He was ridden exactly ONE day in the three years he lived with us, and finally went to the Rainbow Bridge past 30 years old.  What a grand old pony! 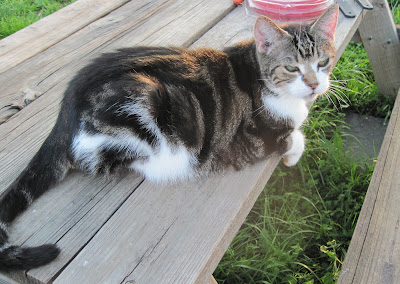 Gwen was actually the first pet we adopted as a married couple, from a cat rescue in Illinois.
She had been abandoned, along with 19 other cats, in a mobile home by a hoarder.  When found, the cats were all starving and sick.  Gwen inhaled her food after we got her home, she still had that "got to get it" mentality for years.  A companion to Nickie, they spent their first two or three years together as friends, and after that, as residents of the same home with nodding priveleges.   Gwen never went outside until the last few weeks of her life... after we lost Nick, she began to show interest in going out.  Unfortunately, after just a few weeks of enjoying the sun on her face, she ventured into the road and was killed.  I found her the next morning, and she is buried here under Beau's tree in the pasture.   My fault, entirely. 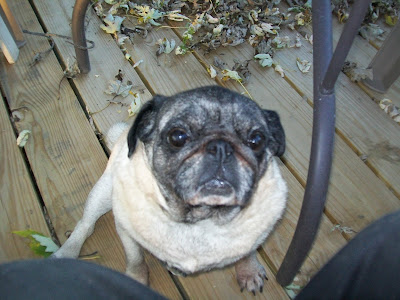 Hannah was adopted through Second Chance Pet Rescue, from whom we also got Abby.

One of five pugs left orphaned by the death of their owner, their vet kindly put them into rescue before euthanizing them.  Hannah was already almost blind... but we medicated her eyes and kept her close to us, since she could not go down in the yard and play like the others.  She bonded to Addie Mae almost immediately, and the big dogs either ignored her or quietly accepted her until nearly the end, when Ranger refused to be near her.
Over the course of her last year, glaucoma developed until we had to remove an eye, and she never quite recovered from that trauma.  We lost her on January 24, 2012, and I still miss her and look down at my side, almost not believing she's gone. 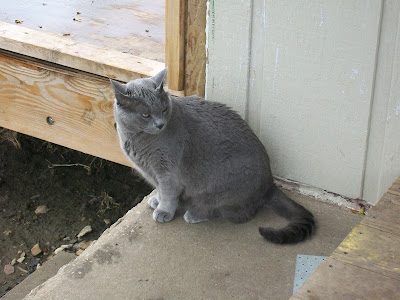 Nick was the only link, besides me, between the old Calamity Acres and the new.  How he loved living here!  Wherever we went outside, Nick would lurk along and be with us, he was the most people-loving cat ever.  Despite getting all his shots yearly, he developed an infection of some kind our vet could not discover, and we watched him waste away, sadly.  Finally, I did what was best for him and he sleeps under Beau's tree in our pasture. 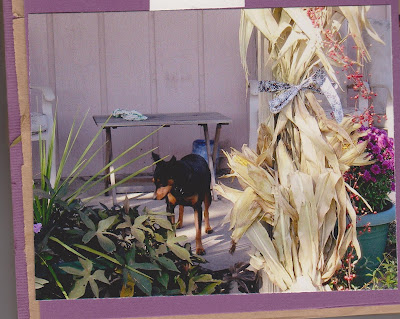 Not a pug at all, but a min pin.  Dog of my heart... I was so connected to him.
He got out of the gate one night in the dark, impossible to see... and was hit by a car on the highway only 2/10s of a mile from our home.  Our dear boy, our first pet as a married couple.
Buried under "Oscar's Tree" in our yard, with a bunch of wildflowers and grass that grew up on his grave, never to be cut.  Keith and I talk about him still, he had so many funny ways.  He was best friend to Ranger, and they were boon companions.

He's waiting for us, we know, over the Rainbow Bridge. 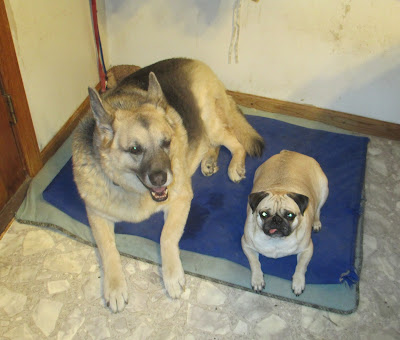 Gertie Lou, liveliest of all our pugs... gentle little sister to Ranger, who loved her.  Happy little dog, with the cutest mannerisms, and who was passed from family to family the first year of her life.   My friend Amber told me about her... a pug that no one wanted.  I picked her up the first week of December of 2010, and she was our Christmas present that year.  Friend to Hannah and Abby, she fit right in and we had Three Little Pugs.  She was brave to the point of foolhardiness, and how many times have we said "Thank God Gertie isn't here to get into trouble" when something has happened here in the last 7 weeks.  How many times we've cried, and missed her little mewling sounds as she shifted in bed or on the couch at night.  We lost her in December of 2012, only three years old, to an embolism, our vet thought... gone in a minute, literally, but not forgotten in our hearts.
She's waiting for us, with Hannah, Addie and Oscar, at the Rainbow Bridge.