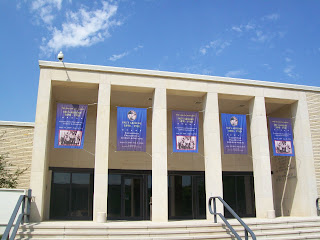 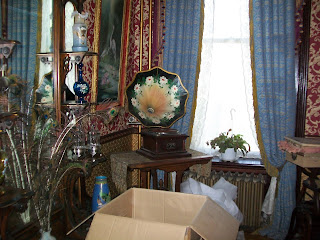 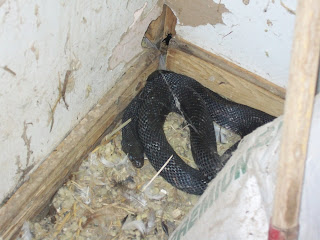 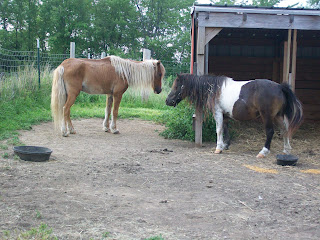 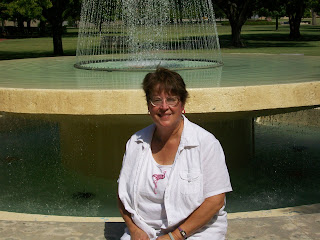 This week brought another birthday, my first without my dear Mother. Despite the innate sadness of the day, Husband treated me to a wonderful time. We took the day off work, and drove to Abilene, Kansas, where we toured the Eisenhower Museum site. We ate lunch in a wonderful restaurant with delicious food based in a restored Victorian, the Kirby House... and also toured another over-the-top restored Victorian, the Laclede Mansion, which sadly has been sold and will become a private home again. I say sadly for those of us who admire sturdy old Victorians, but not for it's new owners, who will be living in a true gem.
My love of history made the trip a memorable one, as we slowly moved through Ike's museum and his family home. We marveled at how the strapping Eisenhower boys were able to cram into the small home, and the fact that his mother lived there until 1948. It is a beautiful, well-kept site, and also features his presidential library. We also find it shocking that so many of our contemporaries do not know anything about Ike as a general or president, and were truly amazed by that. I guess our love of history has opened us to more than just day-to-day facts.
Coming home to do chores that evening after a second pleasant drive through the Flint Hills, we found our new equine had been delivered. Described as "a small pony", she appears to be a large mini horse. Beau, the Old Gentleman, was staring lovingly at her over the fence. When I let him in, they hauled off and kicked out at each other, and then settled into amicable companionship. She is a second Lily, as she has been called that by her owners, and is loaned to us to keep Beau company. We have found her to be sweet and compliant, as the wild Lacey was not, and follows us around like a puppy. In fact, I thought she was coming right up on the porch several times!
They are out there now in the sun, lazing together, both members of the Long Mane Club!
We are down two chickens this week... the pullet who was raised by Dovey fell prey to Lilly Ann on Friday, we came home from work to find a pile of gray feathers in the yard. Either snatched through the fence or flown over, she was easy work for the hunter. And Husband had to put a cockerel out of his misery, something scared them into piling, and when the pile unfolded, one cockerel could not walk. We put him in the nursing cage for the day, but realized that night that a leg had been disconnected or broken. Husband put him down, so our numbers are reduced to 42. The other 13 silkie/cochin crosses are all healthy and well. As the younger ones get older, I am thinking of re-homing them with someone who likes little birds the way I do.
Mr. T., our resident black snake, has been hiding in these cold, chilly last days of August. Twice this week I found him curled up behind the feed cans, but now he has disappeared again. I think the early chill is driving him and his brothers underground earlier than normal, as long as they don't take any young chicks with them! 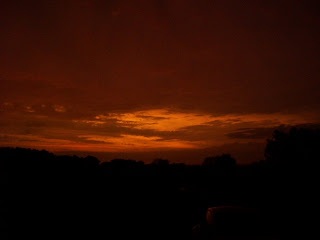 This is the time of the Dragonfly Dance. The time when the cicadas sing at sunset, as the suns rays fall below the western horizon, when the grasshoppers flap their wings in the warm sun, and the chickens begin to come in at 6, knowing the days are growing shorter and looking for their roosts to settle for the night. It's the time when grasscutting goes from being a pleasure to being a chore, and the constant trought filling and pool watering is a pain. As I mow, the dragonflies flit in the air before me, drawing close to the mower and my arms, and then buzzing away at speed, dancing and zooming, off into the pasture and back again. The walnut trees are dropping their leaves, first to fall and last to come out in the spring, their lives short each year... and their bounty littering the yard so that the mower zings the walnuts as I drive over them. Weeds grow tall, and the tomato plants begin to wither and lean, while peppers are still pumping out. The llamas, fat and happy, stand in the shade of their mulberry tree, or graze in the late afternoon shade, growing strong and healthy. Even Uncle Beau has gained a little weight, and moseys around in the yard, unaware that he will have a new companion to bring a spring to his step in a few days.

For us, it's autumn too, a couple of momentous birthdays and another chapter growing closer in our lives. It's the Dragonfly Dance.
Posted by Mary Ann at 11:47 AM 1 comment:

The Wolf at the Gate 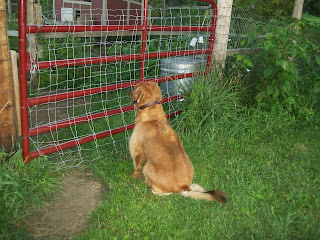 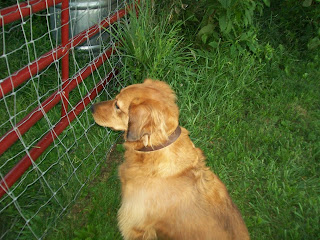 Lilly Ann, Waiting for a Ripe One
Posted by Mary Ann at 11:43 AM No comments: 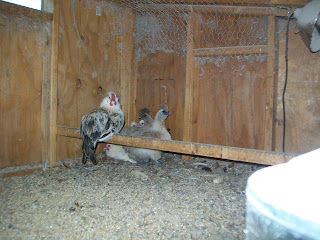 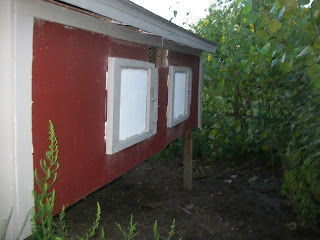 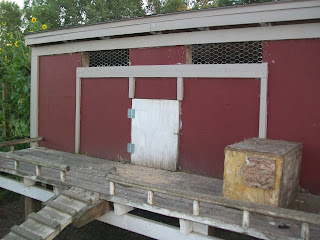 The little chickenhouse was a gift from my husband to me, several years ago. An "overflow" space, we envisioned it as a home to the chickens bred here. Actually, it has served to isolate new chickens, and get them used to their new home, and for hens who have gone broody to raise their young in safe place, snake free and cozy. This year it was the first home for the four little red hens, the three Old English Gamebirds, and the three silkie sisters bought in the spring. Once they had all graduated to the Big Henhouse, the little henhouse was the place two of the silkie sisters decided to share brooding duties on a pile of eggs. They duly hatched five of their ten, and raised those five in the safety of the little house on stilts. From within, the babies heard the sounds of the other chickens, the ducks and the geese and they went to and fro underneath, eating from the big fortex and carrying out their chicken dramas. Just as I decided to let the five babies and their mamas out into the world, the mamas went back on the nest and eventually hatched seven more babies. It was clear (from the shape of the chicks) that One, Two, Three and Four had fathered some of the babies, but it was also clear that Curley the Featherless Wonder (the frizzle Cochin) had fathered part of Batch Two, as three chicks have excessively curled (frizzled) feathers. Now, after months of feeding in three different locations, I have plunged forward and let the little chicks out into the world. After netting three of them for several nights, I realized it was time to let nature take it's course, and lo and behold, they figured out how to run back up the ramp and into the little house at night! Now I'm thinking of re-homing the whole bunch, before the girls go broody again.

The little chickenhouse, besides providing shade for the birds during the hot summer months, was not constructed with a lot of forethought and we would make modifications to it if we were to build another like it. The rear doors serve to clean it out and place feeders and waterers, but the gleanings swept out onto the ground have made a soupy nasty stinking mess behind it, and today we are weed-eating and cutting down vegetation so that the sun can get to it and dry it out. It's NOT a fun place for chores!

One rooster of the first hatch is, of course, a beauty, but as we have Studly, Butch, One, Two Three and Four, and Baby Rambo, along with Curley, it's time to stop. Rooster and all must be given over to some new owner who hopefully will be as delighted with silkie/cochin crosses as I am.

End of summer means changes in the way we are doing chores around here. After lugging the water hose all summer, I have decided that the new pond needs to be a priority next year. A new pond means that the plastic swimming pools and big trough will not need to be kept up for the ducks and geese, who do not like to swim in the red algae hole that our pond has become. Luckily, husband has bought into this, and we have begun to search for a responsible person who can dig us a pond at a reasonable cost. I'll be glad to see the end of the plastic swimming pools. They are hard to keep clean and a pain to fill daily.

Tuesday will bring the delivery of the new pony companion for Beau, the Old Gentleman. We have argued with ourselves for weeks, as Beau's appearance has waxed and waned. We know he is lonely, and this pony mare may only be a companion for a few short months, but we hate to see him lonely. We won't be here to see his joy in his new companion, our friends will drop him off while we are in Abilene for the day at the Eisenhower Museum and Lebold Mansion, on a summer "staycation" daytrip. Next morning doing chores should bring his delight in his new "girl", who is currently called Lilly, but may have a name change since we have one of those bright flowers in our family already.

Speaking of Lilly, we have a chicken missing all the feathers on her derriere at the moment, and bird dog who is sitting very close to the fence constantly, nose to the wire. Hmmmm.
Posted by Mary Ann at 11:19 AM No comments: 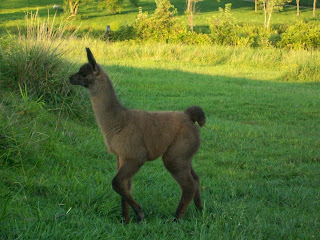 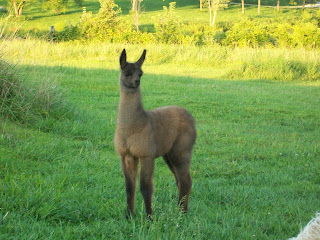 Tonight, Yankee and her big brother Tony ran up and down the barn pad out in the pasture, leaping like gazelles as they played Tag and Follow the Leader. Tony, who can run as fast as the fleetest deer, slowed down to chase his little sister, but ran at top speed when she chased him! Her legs are growing strong and capable, as she nurses from Mama and plays with Tony. She's a delight to watch, and we spent many happy minutes on the deck, watching them run up and down. 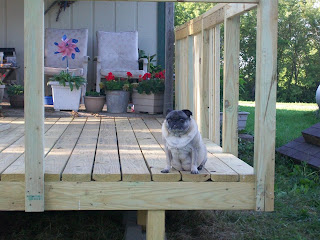 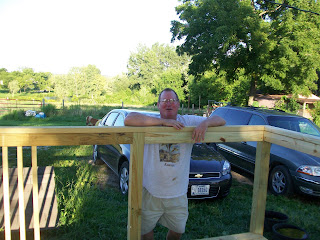 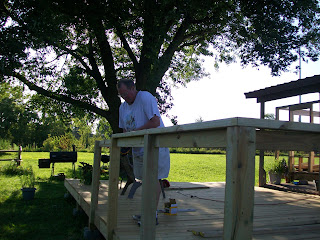 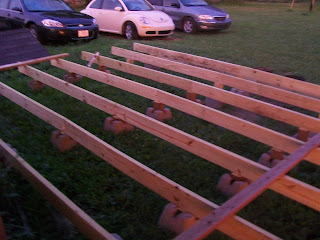 For a month now, Keith has been working on the new deck. From modest beginnings on a piece of paper, it has become a 16x26 foot outdoor room. Today, the steps down to the yard will be poured and made... and then the rest of the railing put up this week. It is already in use by us, the dogs and the cats, who have welcomed it's position, half in sun and half in the shade of the big maple tree.
It will be such an enchancement to Calamity Acres!
Posted by Mary Ann at 11:29 AM No comments: 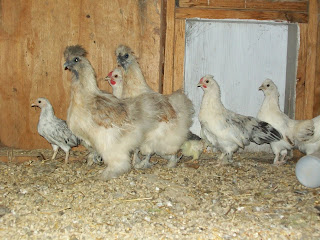 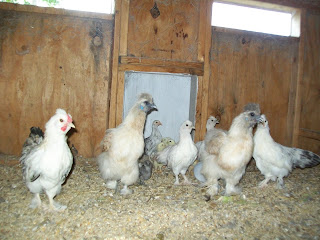 The Silkie Sisters, imprisoned in the little henhouse for the past 3 months, have had a chick explosion. They hatched out five from their first setting, but then miraculously managed to bring forth seven more when the first five were getting ready to be launched into the world. Now I am undecided as to whether or not to let the whole bunch outside, as Batch Number two is only 3 weeks old at this date, and ripe for the taking by snakes, rats, possums, etc. not to mention low-flying hawks. As two of them are defnintely frizzled, I hate to risk it, but the mamas are sufficiently bored from being "COOPED UP" (and now we know where that expression started) that they are going stir-crazy. Who wouldn't with 12 children around you all day and all night?
We may try it... if we lose a few chicks... then Nature has taken it's course.

I'll let you all know what happens!
Posted by Mary Ann at 11:10 AM No comments: