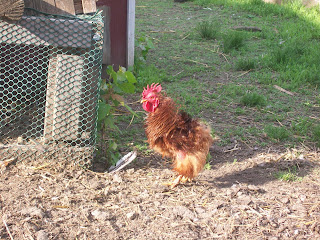 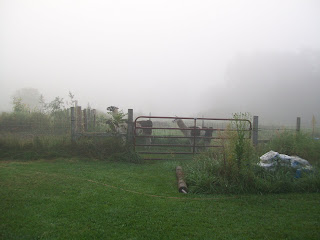 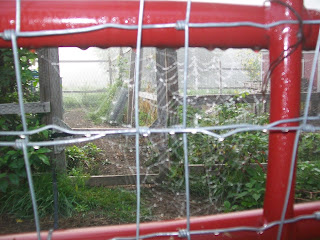 Labor Day dawned somewhere, but here in the Midwest, outside the little town of Tonganoxie, it was all fog and dripping. Spiderwebs hung damp in the fog, gracing porch and gate and plants. The full moon shown weakly through the fog as it went down in the west, and the sun surely was rising in the east.

If the pool is open today, it surely will be the last time anyone takes a dip this summer, and the unofficial close of summer is a wet one.

Having cut the entire 2 acre yard in one fell swoop yesterday (rarely done!) I was able to sleep a little later this morning, and enjoy it. Yesterday's dawn brought the loss of little Curley, the frizzle cochin rooster. Only two pounds dripping wet, Curley was a featherless wonder who ran like Speedy Gonzalez from horsepen to hen corral at the speed of light. He jumped the hens, no matter how large, and flapped his miniscule wings at his mighty crow. He brought a grin to my face daily with his antics, and even though he has been featherless for months over half his body, he was amazing in his spunk and ability to fight off the marginally-larger roosters. Sometime in the night Saturday night, a snake got him. It was only able to suffocate him, not swallow him, and so backed off as it did the beautiful brown pullet earlier this summer, leaving him dead. I almost wouldn't mind if the snake had a meal, but to lose a fine little rooster for nothing was a blow. Snakes 3, farmer 0 for the summer.

Curley had taken to sleeping on the floor of the henhouse, and I had feared that very thing happening. Last night, the crippled hen Brownie slept on the floor in the closet, instead of flying up to the hanging nest boxes. If this presages her demise, I would not be surprised. She will be easy prey for suffocation by Mr. T if she stays on the floor, despite her big size. She is one of the few Rambo daughters I have left.

Baby Rambo has shaped up to be a nice cockerel, but I have yet to year him make a sound in crowing. Normally cockerels start at about 4 months, but he, at 8, has yet to throw back his head and sing. Even Cocky, the silkie cross cockerel is crowing a reedy crow now. They are contemporaries, as are One, Two, Three and Four, and 2 year olds Studly and Butch. Butch has taken over the big hens now that Rambo has gone.

While mowing, I found part of the gray pullet lost ten days ago to Lilly; She had to have been snatched through the fence or flown over.

Saturday spent at a craft fair, Sunday spent at church and mowing... today will be a rest day for your farmer. Safe holiday to all!
Posted by Mary Ann at 10:21 AM No comments: