The System is Stalled

The weather system is stalled, and my system is, too.  Not sure what's going on, but was nauseated all day today.  I chalked it up to my new glasses, and the change in vision... but nausea and dizziness was my lot.  We had T Bones tonight, and I asked if we could leave after sixth inning, since we were losing and had 2 hits to their 11!

Here is our good little Clara,  (taken today) who is getting so very tired of me lifting her sore wing to treat her wound. 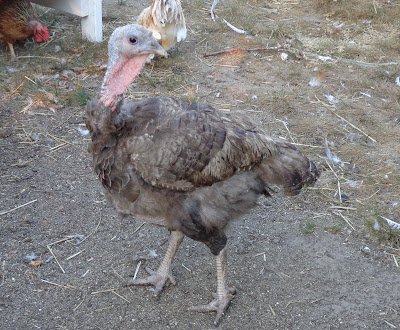 The hurt side is the other side, of course.  You see she is up and walking around, eating and drinking.  We kept her in the little henyard today, because Jackson keeps breeding her, and there were two spots that appeared as if he had raked her sore side.  One of the vets at work is giving me advice, and he said if it looks like she is going south, we need to isolate her and put her on terramycin in her water.  If we do this, we can't let the other birds drink it, so we are prepared to make a small pen with a cover over it for shade, and put her in it with water to stand in, and water to drink.
Fifteen minutes ago when we got home, we found her in the little white pen with the porcelain chicks!  She was laying there with them, so we put her meds on her, then the fly spray, and then closed her up with the babies.  We have to get out there early in the morning to let her loose, so she doesn't stomp them to death, but she clearly did not want to come out. 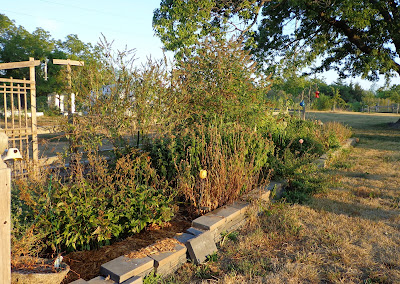 This is what's happening in our garden... as I'm sure it is in many of yours.  I am watering as much as possible... but fighting a losing battle.  The shrubs are doing okay, but I am going to lose a lot of perennials, I think. 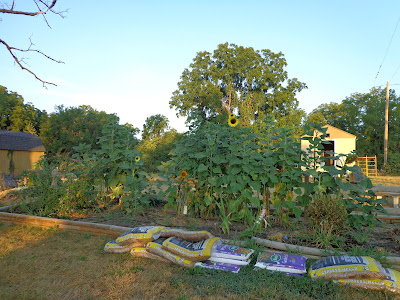 The other side is doing marginally better, but I have laid the water on it to get it established.
The bare branches are from the dying huge old walnut tree.  We think it will take $2000 to take it down, and believe me, the buyers don't come to your house to get your walnut any more...you have to haul it to them if you want to sell it.

Keith has worked all weekend in the heat on the new henhouse, and though you can't tell from this picture, the siding is up now and he will be painting shortly.  We hope to have the electrician in the next week or so and then a few last things and doors will be hung and screens up.  Then the fencing company, as we are splurging on chain link, because of Lilly Ann.

Now to bed, as I have got to get rid of this stuff!  I apologize for not commenting much lately... between the heat and chores, I have gotten behind.