The Mighty Has Fallen 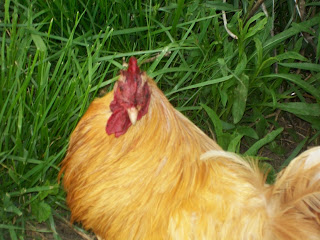 Rambo, our big Buff Orpington rooster, was adopted from the Olathe Animal Control four summers ago. Already mature, he was scaring the ACOs in the shelter. Husband went to get him after he was seen on Petfinder, and walked into the cage where he was kept, gently picking him up from his roost, and holding him close to his chest. "We'll take him," he told the ACOs, and for the ridiculously cheap adoption fee of $5.00, the best rooster came home with him. Despite spurs so long that our vet finally sawed them off for us (without a complaint from Rammy) he has been the Cock of the Walk at Calamity Acres. Spurs never used against us, they kept peace in the henyard, discipling the young roosters and the hens. The eggs hatched the last four summers featured many of his daughters, some of whom have passed on for various reasons, but his get can be picked out by their golden color. Twice he has survived savage dog attacks, including one which killed six other birds and our huge tom turkey. Even though he was greviously wounded, a stay in the nursing cage under warm light, antibiotics, and electrolytes brought him through, even when I despaired. The second attack left him blind on the right side, but for the last year he has guided his flock through thick and thin with his one good eye, his golden tail leading the way every morning. A bump of the chest could settle an unruly youngster. Today, when I came home, his head which lost it's crest in the cold of last winter, was bloody and bowed. He had been vanquished by one of the younger roosters, none of whom are his get. Fred, our Japanese bantam, fathered numerous cockerels by the small hens, and those cockerels live on now as roosters in the barnyard. One drubbed the big golden boy today, and it was heartbreaking to see Rambo afraid to go in the henhouse with his harem. I watched him all evening, putting him in once only to have him run back out and follow me to the pasture, long after he should have been on the roost with his girls. A second time he went in, and I could see his golden tail feathes in the doorway. When I crept closer to see what was happening in the darkened henhouse, I saw the Mighty One bent in a supplication position, afraid to go up to the roost. I had had enough... the other roosters were asleep.... I lifted him up next to his girls and set him on the roost, where he bent his head to sleep. In the morning I'll go out as early as possible to let them out, so he can keep out of the way of whomever has assumed the lead position now, because in the way of all pecking order, the sceptor has been passed to one of the younger roosters. Is it Studly, Fred's grandson, and father of One, Two, Three and Four? Or Butch, also Fred's grandson, but white as can be and beautiful. Only tomorrow will tell. Rambo will still have a place of honor though, for his hard work and resilience of these last four years, even if I have to make a special place for him to live.