And Baby Makes ONE 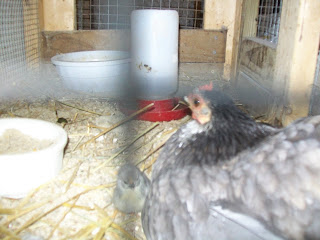 Only two days after we nearly threw Dovey's eggs out as not viable, look who was peeking out from Mama's side today! Very obviously either Studly's, Three's or Four's, (all black/grey roosters) he is definitely out of one of the gray hens, and maybe even Dovey herself. I say he... it will be months before we can tell what it is. Will her other eggs hatch? We were ready to give up on them, and the smell from her cage is not good. If there are no other babies within four days, out will go the eggs and she can raise her one lone child, lavishing her love on it. She successfully raised a clutch last summer, so we know she can do it. She will stay in the cage like her sister Rosewitha until the chick (s) are big enough that they can get away from our resident Black Rat snakes. What happened to Missy, the third of our little gray hens? She disappeared some weeks ago, and I have been hoping she would reappear, a clutch of chicks in tow. That has not happened yet, but I have learned that stranger things have happened in the henyard.