Missed a week, how about that?

Things are humming along here in Northeast Kansas, Leavenworth County.

I got up this morning to this: 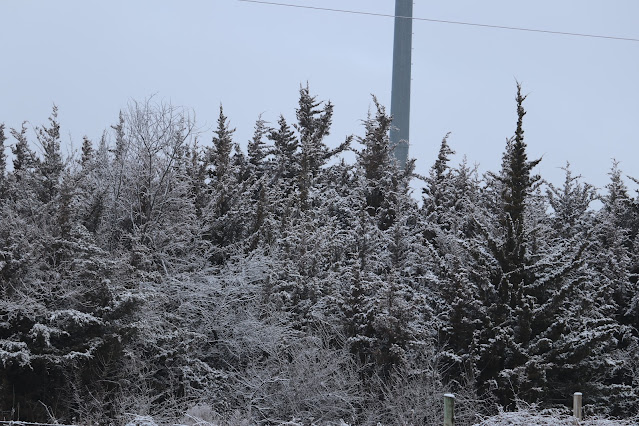 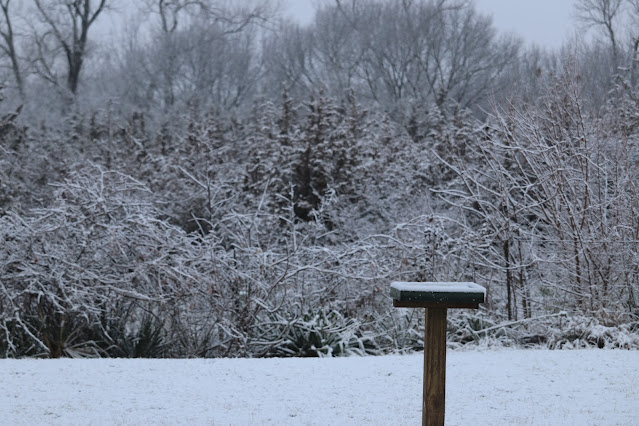 Oh, yes, it's beautiful and it actually was not too cold out!
See the platform feeder in the second picture?  No one could get to any feed, so
I put boots on and trekked out there and cleaned both feeders off and filled them.
I cleaned off the hanging feeders, too... and put the small feeder down on the ground.  I filled both water bowls.
I did not take pictures but within a few minutes, there were many birds out there eating.  I especially like watching the finches on the two hanging feeders closer to the house.
I am satisfied with how I am feeding this year, and the seed you see on the ground in some of the pictures is seed that fell from the feeders.  In past years, I have spent hundreds of dollars on wild bird feed... I can no longer afford that.
I feed a mix from Sam's Club that is 99% black oil sunflower, with a tiny bit of peanuts mixed in... and a tiny bit of filler "parakeet feed", as I call it.  Everyone eats it.  One bag lasts about nine days.
The finches get sunflower hearts into which I mix dried mealworms.  I feed (sparingly) some dried mealworms in the platform feeder you see above, daily.  One five pound bag of mealworms is now 50.00 at Tractor Supply... so I made this months last an entire month. 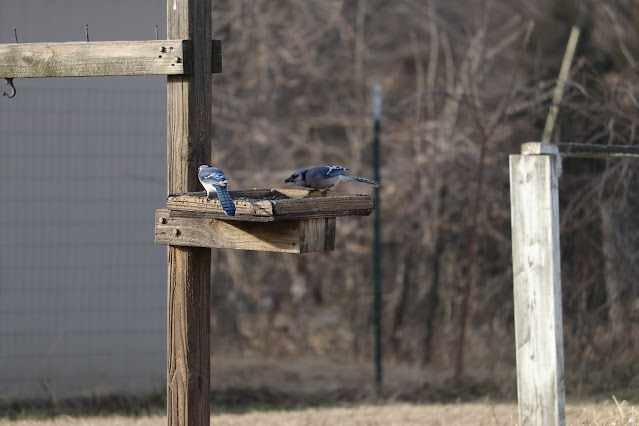 I love watching the birds on the more permanent feeder that Keith built years ago. 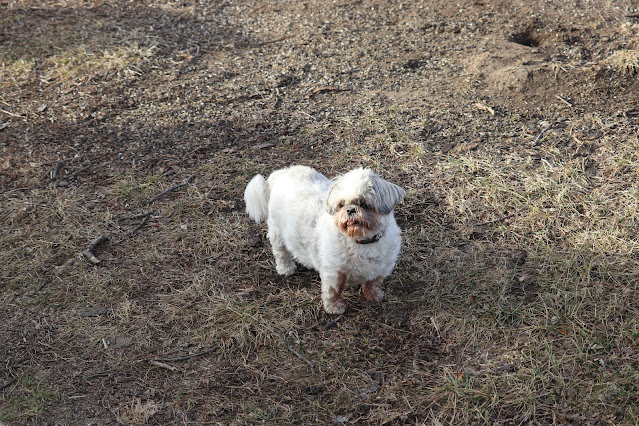 My ragamuffin farm girl, Zoey.  This girl LOVES to do chores with me.
She knows the minute I start to get the bucket ready in the afternoon... her head comes up and she is ready to go!  If Buddy feels up to it, he comes with her. 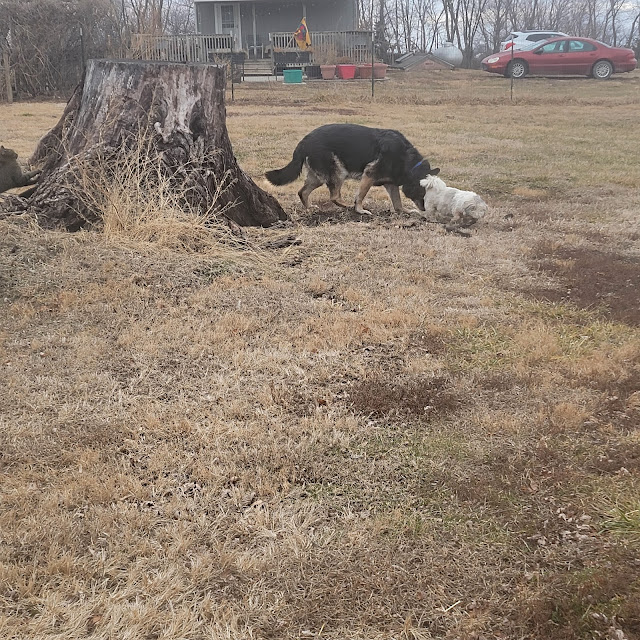 They are such good friends. 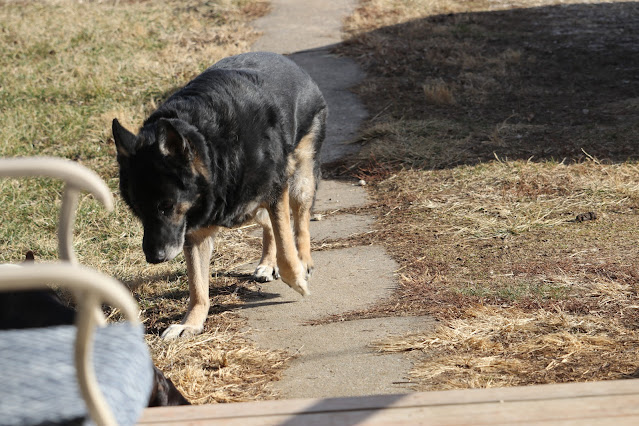 The Big Moose went to the doctor on Tuesday and had blood run, got his nails trimmed, and got weighed.  114.4 pounds!  The doctor did not say anything but the techs and I talked when I picked him up, and he is on a diet to lose ten pounds to give his aching joints a rest.  He is taking Gabapentin daily now for his arthritic old joints.  He remains a hospice foster for Bonner Animal Rescue, and I cannot say enough good about this group.
Zoey and Fritzi came to me through them.
Three weeks ago, I was out at 3 AM with Zoey and Buddy.
All of the sudden, I was surrounded by coyote howls, some that sounded as if they were in the yard with me, and the hair on the back of my neck stood up.
There were some from across the road to the west (26 wooded acres) and some from the foot of my pasture to the east, and some on the north in Spehar's pasture that wraps me.  I came in, shaken.
Because of the skunk dying by my hen house, I have removed the feeder that was in the pasture. 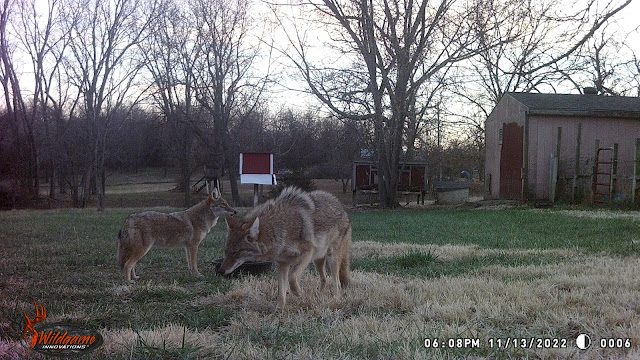 So there is no more of this going on. One came up two or three times after the feeder was pulled, but I have not seen any in day or dusk for those three weeks, but friends, they are still around.
A few days after hearing those howls so very close.... I was on the porch of the big hen house one morning and thought "What am I hearing?"... I live 2/10s of a mile from a state highway, and the traffic does not stop until early morning hours... over that traffic, I could hear coyotes calling each other in broad daylight.  In all my seventeen years here, I have never heard that!
So, fast forward to Friday night.  I got out of the recliner at ten to take Zoey out.  If I don't, we end up at an outlandish hour, rain or not.  I carried her over the deck, put her down... and the most chilling howls came from Troy's pasture, and near his pond, which is about 300 feet behind his house.  I cannot see past my yard light, but I could sure hear them.  For once, Zoey got scared... and in the middle of the horrible chorus.... there was a single scream that ended.  Zoey ran for the door, and I always have her on a leash after dusk.... I ran with her.  I picked her up again and carried her down on the east side, and she did finally squat and then stood at attention, no tail wags, and stared down into the pasture.  The coyotes had moved away after the scream, to the east. 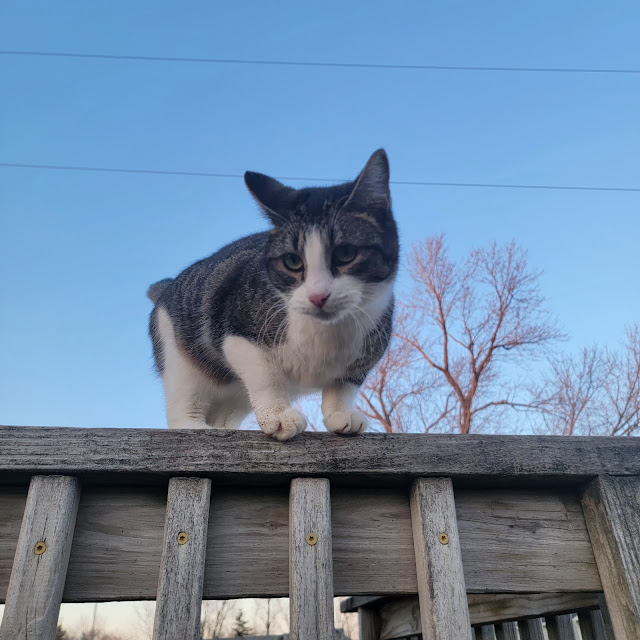 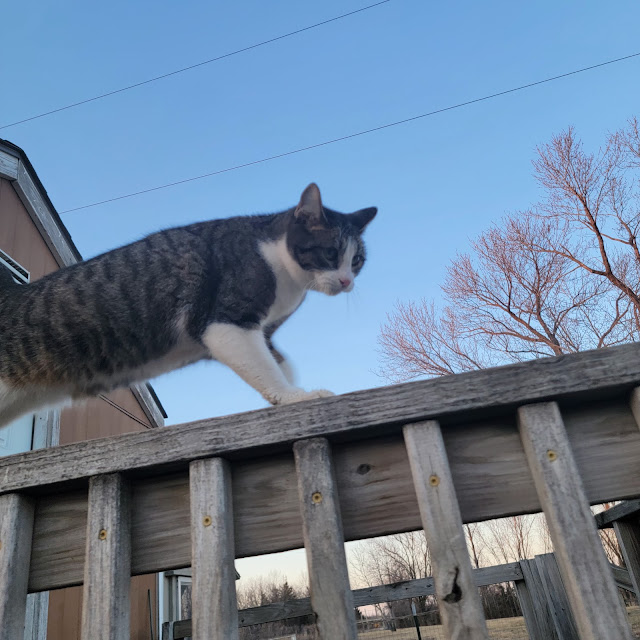 This is my Teenie girl, who hangs out on the porch of the big hen house.
I have not seen her since Friday afternoon, when I took these pictures. I am praying so hard the scream I heard was not from her.
She has not been there all day today, and I have checked all my cameras.  There is another cat, Alien, who looks like her... I have seen him.
I have seen Diamond Lil, the most elusive of all the ferals.
Not Teenie.
I had her spayed at Leavenworth Animal Welfare Society and I am just hoping she is all right. 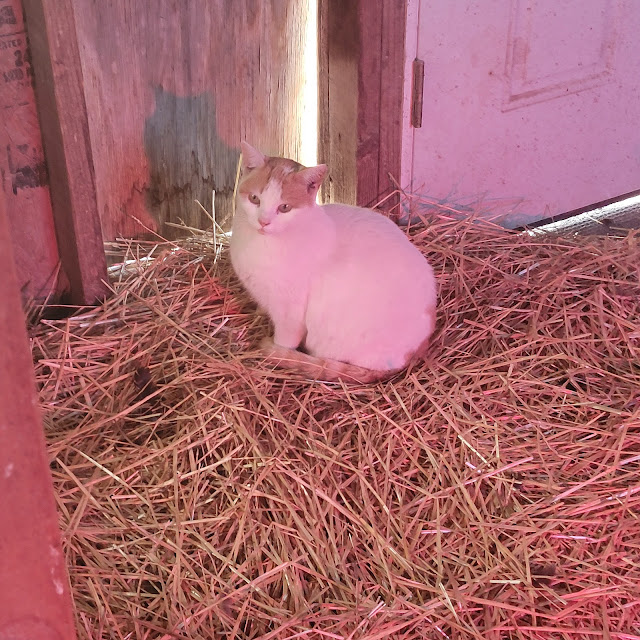 Wanda is still living in the big hen house.  Coco, the black cat, now sleeps in the old hen house, and I lock her up there every night.  I sleep so much better knowing that they are safe.
Both can go in and out during the day. 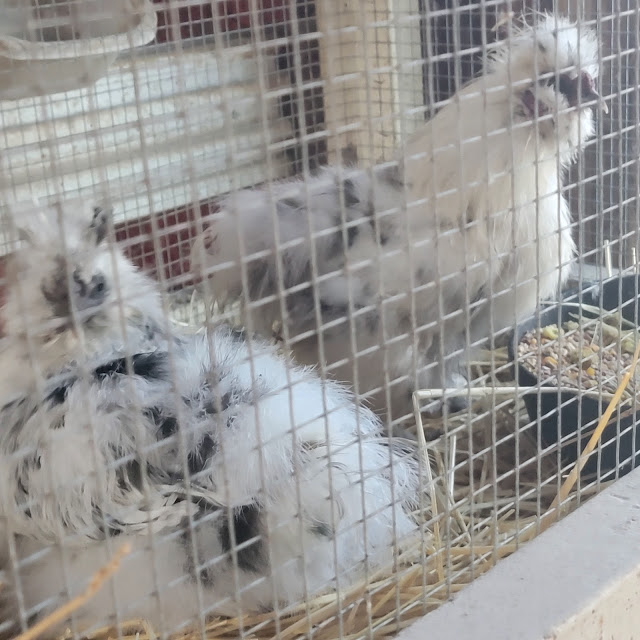 The Silkie rooster and hen are spending the day inside today, their outdoor pen was full of snow.  It has melted somewhat and I let the bigger birds out, but I am keeping them in until morning.  I have to carry them in and out twice a day.
You all know that eggs have become very high at the grocery.  One reason is that avian flu has hit the US hard, with 50 million birds lost last year.  IF you have one bird test positive, from what I understand, the entire flock must be culled.
It has come within two counties of me.
I feel somewhat protected as I no longer have a little pond here.  There are three ponds east of me, and one across the road to the west.  I have seen geese land on the three to the east.  I understand ducks are more likely carriers of it, but I feel like the likelihood of a wild duck landing here is very slim.
Here is the difference it has made in practical terms.  Chicks have gone sky high.
People are buying chicks who have no idea of the smell, the noise, the constant care that must be given to keep them warm enough, fed, and watered and keep their cage or container clean to prevent disease.  The farm stores sell flimsy shelters for chickens that are designed really to hold only two full size chickens at adulthood... and cannot withstand an attack from predators.
If you want to buy full size hens, good luck... it's a seller's market, and the prices have gone sky high.
We have not had a flock at the National Agricultural Center for three years because of covid.  We would like to put one there again this year, and I have begun putting out feelers.  We want only six or eight birds, but to find adults, I am going to have to pay over 100.00 for them.  I may have to settle for some aged hens in order to get any, and the alternative is that I start chicks and all the work that entails.
So... we shall see. 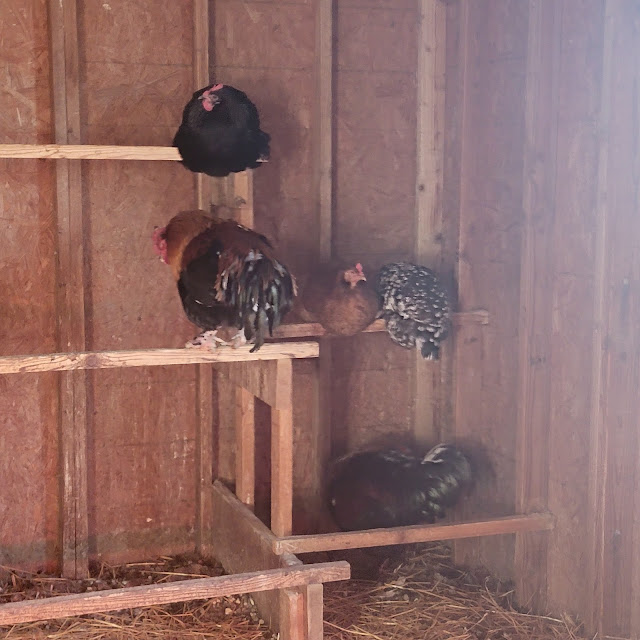 My oldsters this week... this coop used to have thirty birds in it, it now
has six, plus the two silkies in their pen.
(One hen was in the rafters)
The rooster on the floor has lost enough toes that he can no longer roost.
I still have seven younger girls and Doug, the Silkie rooster in the little hen house,
and Singleton the white rooster and one older Ameracauna hen in the old hen house.  She laid four green eggs the week before Christmas and I have not seen another egg out of her! 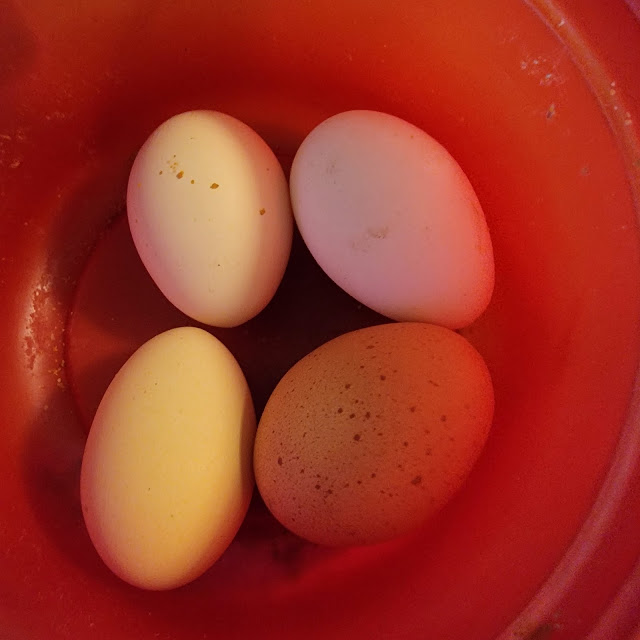 This was my egg take yesterday.  I used to get dozens a day.
It is 2:19 and the sun has just come out!  So good to see it!
We have been told we are going to get more snow on Wednesday.
(It disappeared almost as soon as it appeared!) 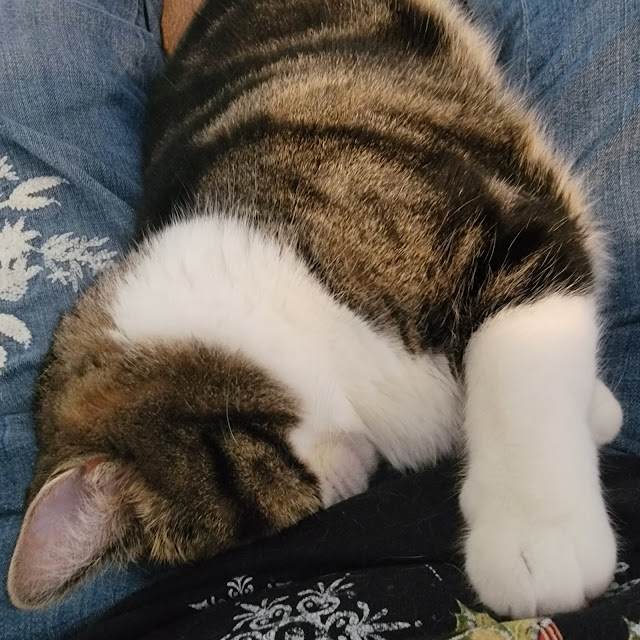 This is how Molly and I spent most of the morning in the recliner, after chores.
She has her head tucked under my sweatshirt. 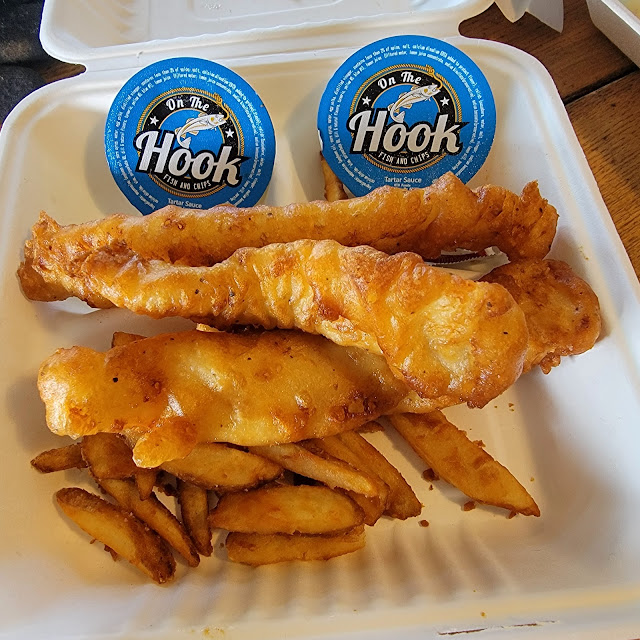 My favorite food truck was here this week!
They are back, in Basehor, (five miles) on Saturday the 28th.
It gives me something to look forward to. 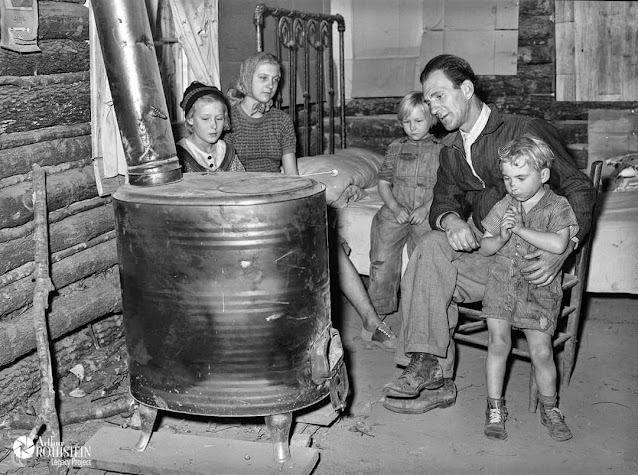 Things could be worse.
At least this family had each other.
I remember when my kids were little we lived in a drafty old house, and
I would huddle on the furnace grate in the dining room and read in the evenings.
There are a lot of people who romanticize how "life on the farm" was fifty, sixty and seventy years ago... too often it was like that picture above. 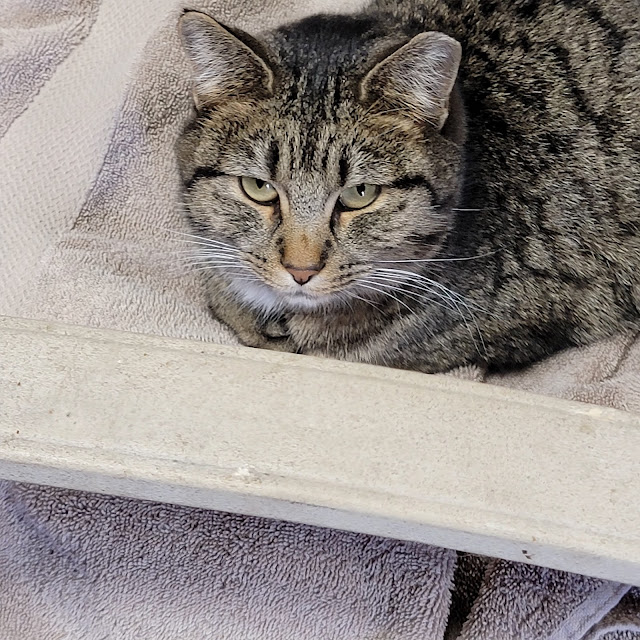 Mama says take care of each other, and we will see you soon!
Posted by Mary Ann at 2:47 PM