Catching Up in Merry May

We have lots going on around Calamity Acres these days!

A week ago, I was contacted by a friend, Tammy Potts, a local guidance counselor and long-term cat advocate.  Four years ago, I re-homed four feral kittens from one litter for her... Rusty is the sole survivor of that quartet, that I know of.  Tammy approached me to see if someone around here would take a feral kitten that had been spayed and had her shots, but was very, very frightened.  There were also odd circumstances around her landing at a local rescue, Hope Inc., in  Leavenworth.  I told Tammy I would take her myself. 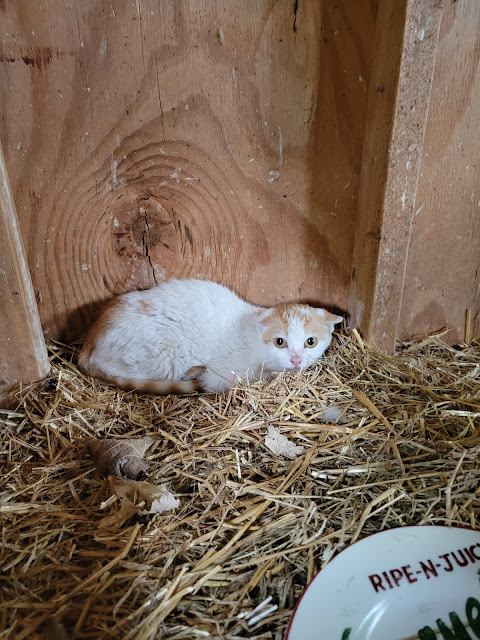 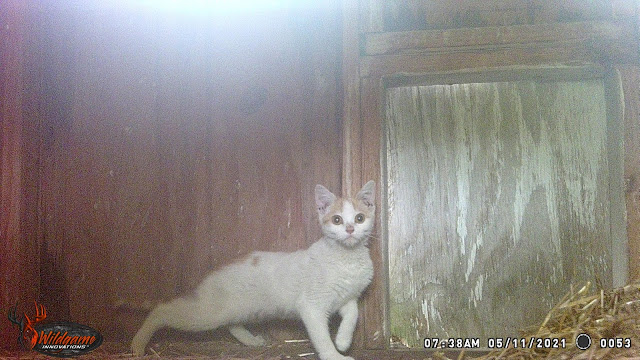 Everyone, meet Wanda.
Wanda has tried to get me at least ten times, do not be fooled by her sweet little face.  She is seriously feral.  IF my phone was still syncing, I would be able to show you how she normally looks.... like a scared little ball of fur waiting for the next bad thing to happen to her.  She is only about six months old.  In fact, we were not sure she was going to make it, as she cowered in the straw for the first few days.  However, I have a litter box in the hen house and was happy to discover that she is using it.
She also is making fast work of wet food, and I got her kitten food today.
I go out and talk to her four or five times a day, and I think it is going to be a few more weeks until she can safely be released.  Then I'll keep food for her after that (IF the raccoons don't get it).
I put a camera in the hen house two days ago, thinking it MIGHT show her moving a little, and I was so glad to see she even appears to be playing with the toys in there.  I breathed a huge sigh of relief.
I wish we could find another feral to put with her, I think they would have a better chance. 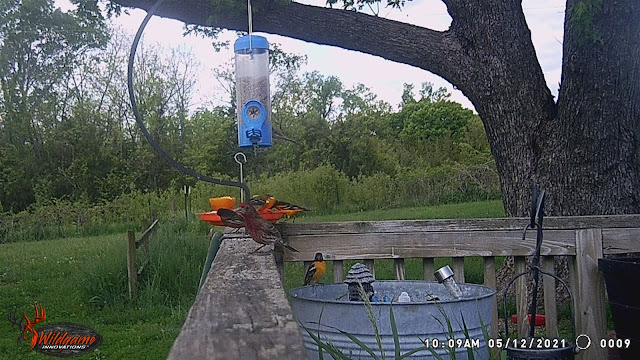 The Baltimore Orioles are flocking to the feeder on my deck, and I had to go buy
four more jars of grape jelly today.  The crazy thing is, they don't stay, and I always over-buy jelly every year. 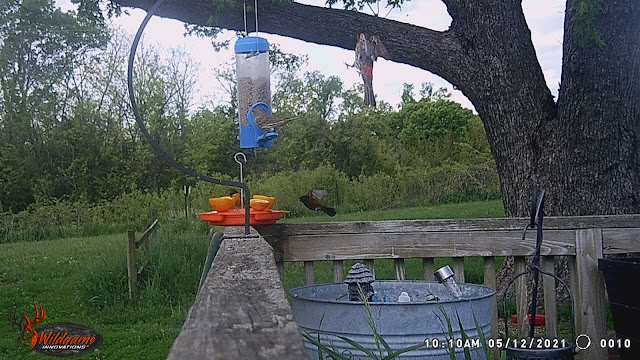 The bird on the right (not the one in the air) is an Orchard Oriole. 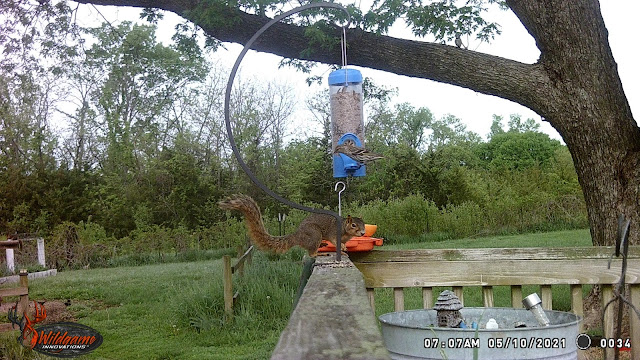 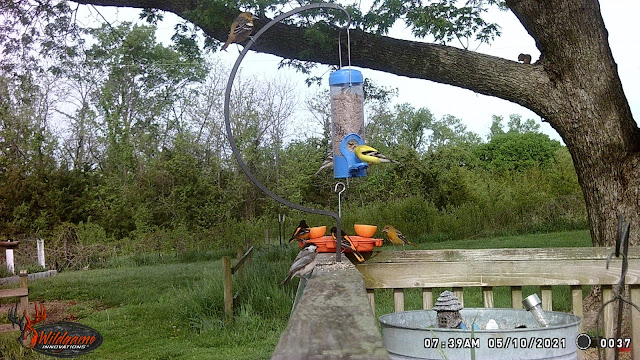 My squirrel friend has gone back to the tree. 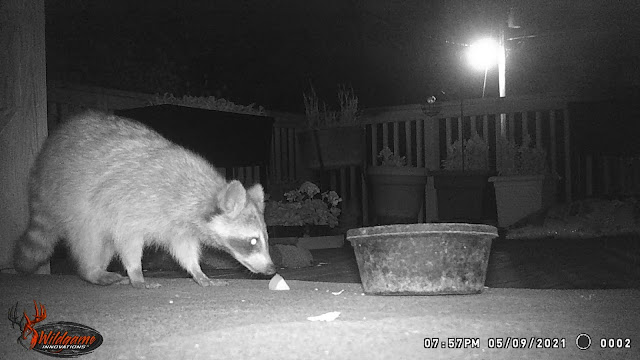 These guys are still around, in fact, they are wreaking havoc on the deck at times.
Right now I am at the point where I leave just a little bit of food out for them at dusk,
and that's it.  I have not seen any babies brought up yet, either on the deck cam or the
yard cam. 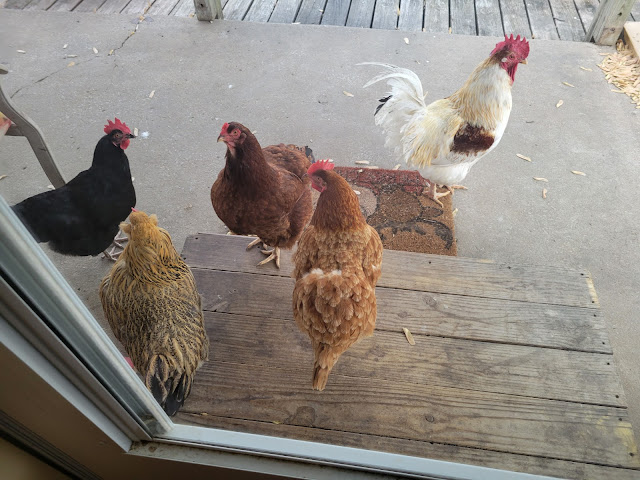 So, if I could get my phone to sync up... I could show you that I kept one chick of the
four red... one was killed by a gigantic snake and two went to a friend.  I decided I needed flock replacements after all, and I stopped at Kansas Country Store in Leavenworth after a doctor's appointment on Monday and bought six pullets. 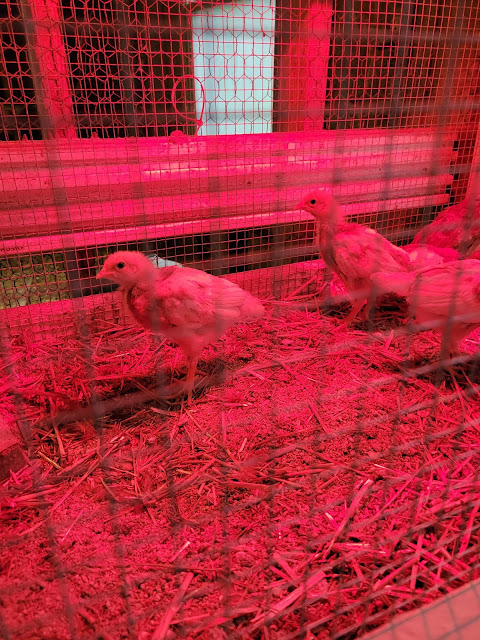 These are brown egg layers, six nice pullets.
Not losing any more to the giant snakes... I will split these three and three to grow on (when older) in my two snake-proof brooder pens. 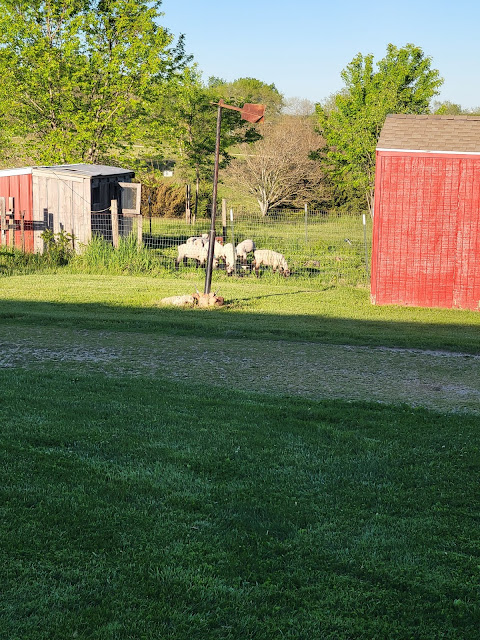 Nine lambs left last Friday to be sheared.  Only seven came back.  One is being kept for observation,
one suddenly died, one whom I had been worried for.  The others are on the pasture, which I have trimmed down and will trim some more today, before the rains come for the weekend.
I am feeding them once a day now, to supplement their grazing and fatten them up a little after their worming. 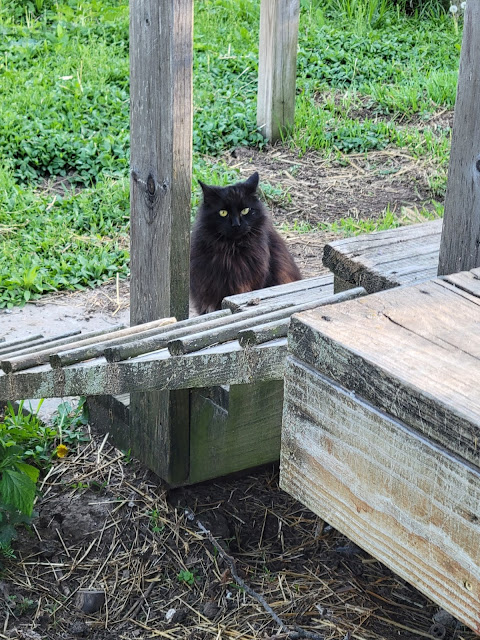 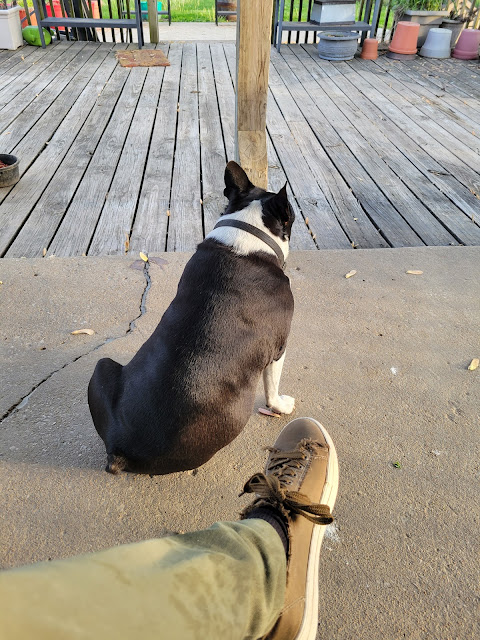 My dear, faithful Jester.
He has just been the best dog.  I know we are both a little overweight,
but we are happy, and that's all that matters.