Happy Easter, Friends, for those of you who celebrate Easter.

It is beautiful here in Northeast Kansas this morning, and we are going to rise to 80 degrees today, if the weatherman is to be believed.  I actually had to turn the warming light off of the chicks yesterday afternoon, but went out after the Easter Vigil and turned it back on.  I am watching the temps this morning so I can turn it off before they get too warm. 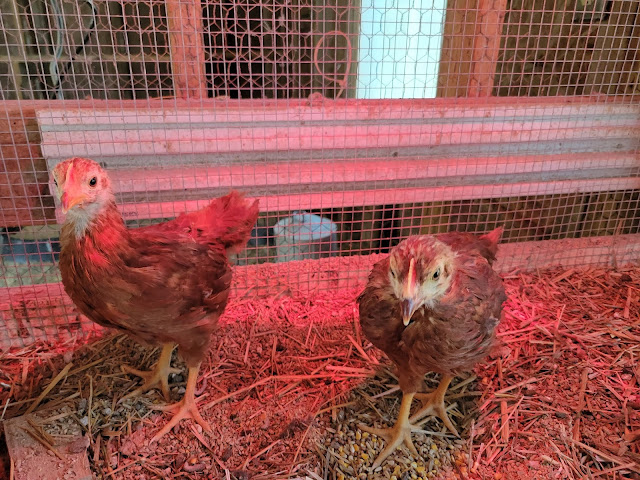 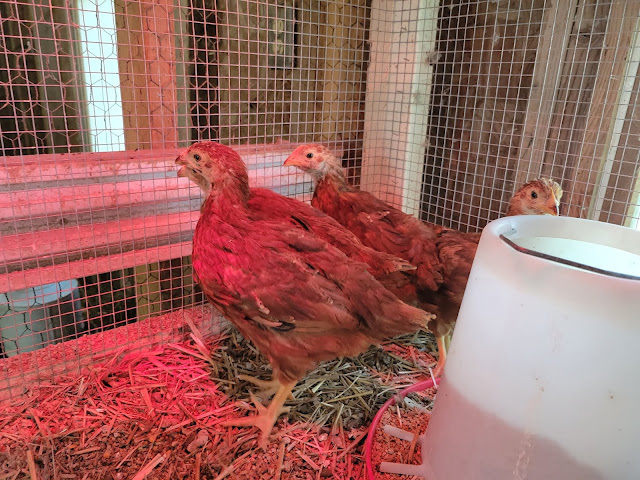 They are doing amazingly well for their terrible start in life.
I have let the vet's office know that I would be glad to take a few more after
Easter, when they told me they will be inundated.  I do have another
brooder pen in the old hen house.
Last Sunday morning, Jester and I went to Riverfront Park in Leavenworth to
walk.  It was very peaceful and there were only a few other people there,  Keith and I often walked Oscar there when we lived in Leavenworth.  I thought it would be a good change of pace for Jes. 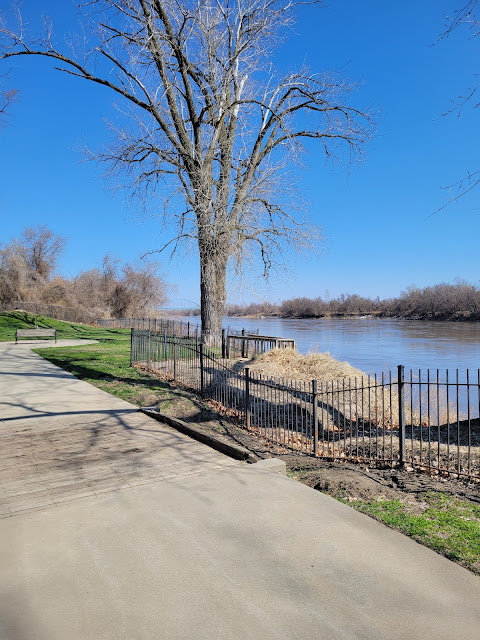 Jester is nine, now, and though we used to walk daily from the ages of two to five for him,
starting over has been hard.  There is also the issue of his overweight, too.  I have noticed that instead of improving, he has become more and more hesitant, though he likes getting in the car, going,
and then walking a little.  When he is finished, he just....stops.  I cannot carry him at all, I can hardly lift him into the car, and he won't use the steps that Lilly and Snowy used.  We see our good Dr. Tom on Wednesday, for a nail trim but also to have a look at an ulcer scar in his eye... I have wondered lately if perhaps he is not seeing well and that is making him hesitant.  It may be that at nine, his days of walking any long distance are over.  Dr. Tom and I will talk about this.
The Missouri River was full and moving VERY fast in the above picture... and that park is often underwater when the river is high. 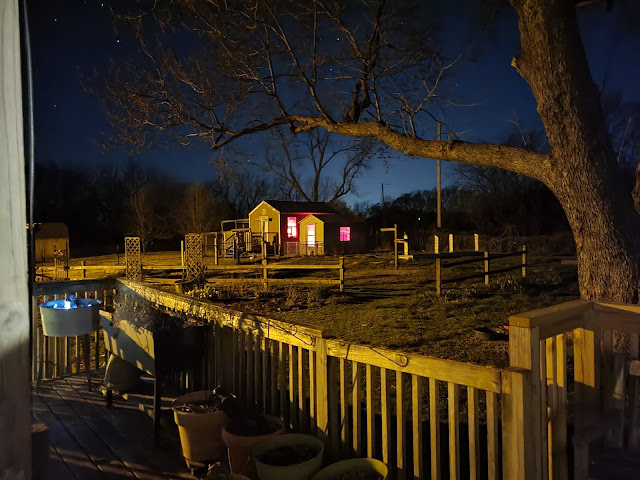 On the thirty first and the thirtieth, I turned on the warming
lamps in the hen houses for two last times, I think.... it dipped down into the low twenties.... see how they glow from the porch?  It looks like there was still daylight when I took this picture, but the
hanging lights on the deck lit up the rail, and that is the glow of Lawrence, Kansas, behind the hen houses in the sky, I think. It was actually pretty dark out.  I have to admit that I like looking out at the
lights during the winter, and knowing everyone is safe.
I saw an unsual bird this week, and it's the reason why I look at
every single picture on the game camera roll, whether or not it's been out one day or five days (hundreds of pictures). 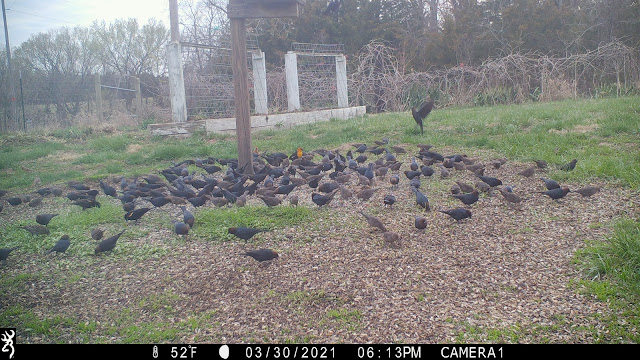 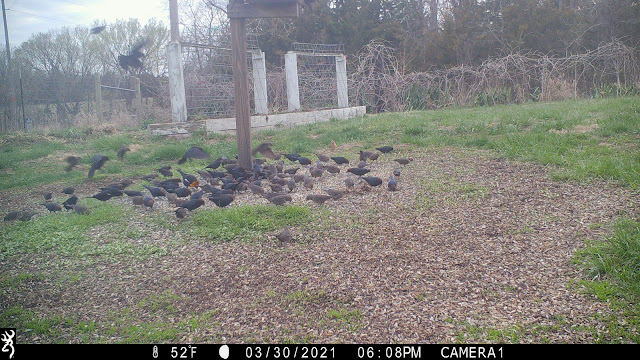 You will have to enlargen those, maybe, to see it.
It's a yellow headed blackbird.
I have only had one or two here in all the years I have watched birds here.
There was one at the big house, while we were there.
I have not seen it since the day it appeared on camera, so maybe it was just passing through.
In the top picture, it is to the right of the pole, in the bottom, to the left. 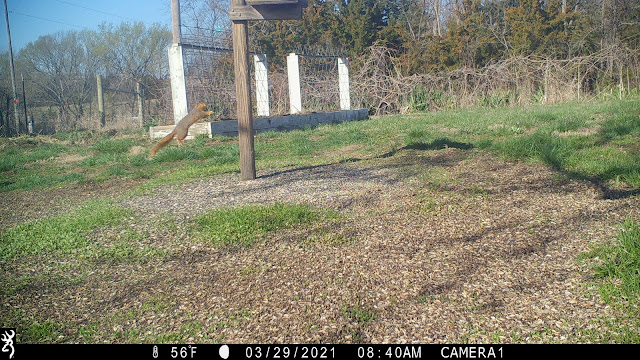 How do they DO this? 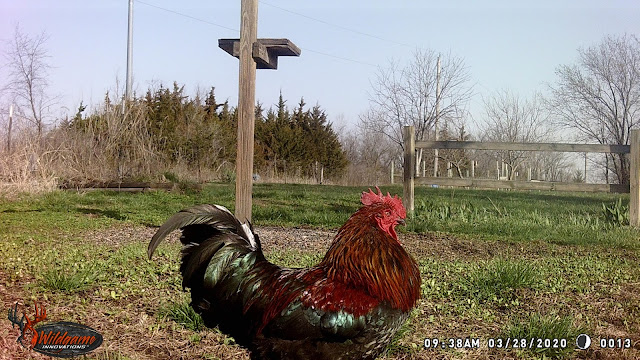 The garden camera caught Buddy earlier in the week.  I have been letting the chickens in in the late afternoon, at least until I plant.  Buddy looks evil in this picture!
However, he is pretty gentle, in fact, all of my roosters now are very gentle with me.  Several have had to be consigned to the stew pot in the past.
My tradition has been to cut grass on Easter Sunday after church.
You see, when my kids were growing, we went to my mom's on Easter for dinner after church.
When mom died, I took up the post.
As the boys got older, one moved out and the other went to his
in-laws for all holidays.  I ended up with the "dessert schedule".  Keith's daughters spent it with their mom or in-laws... so I got used to it just being the two of us.  Now, I almost like celebrating alone. I can putter around the house, and then go out and cut a little grass.
If I wait much longer, it will be overdue. 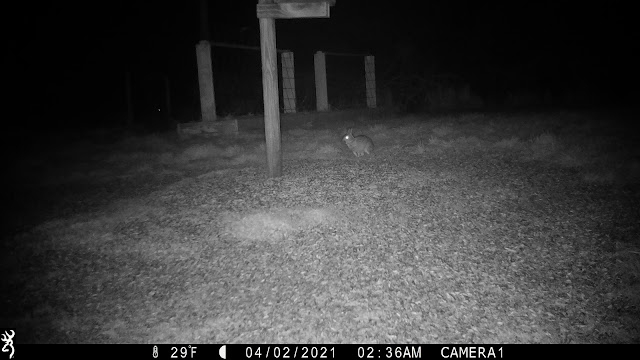 I have so many bunnies here.  It makes me nervous about cutting grass!
Last night as I went out to put the last hen in (!) I startled one coming through between the
little hen house and the Hen Spa.  It was surprised, and slowly turned around and hopped back once it came.  It was a BIG rabbit. 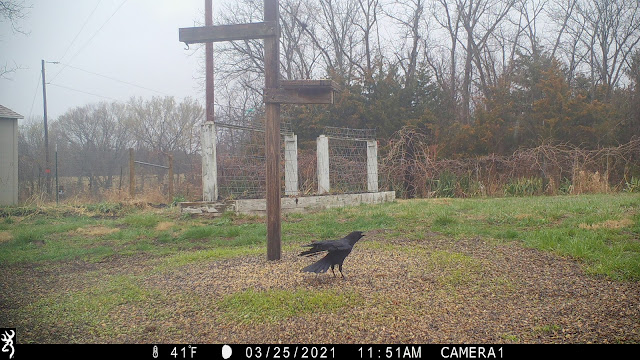 I don't know about you, but to me, this crow looks seriously hacked off! 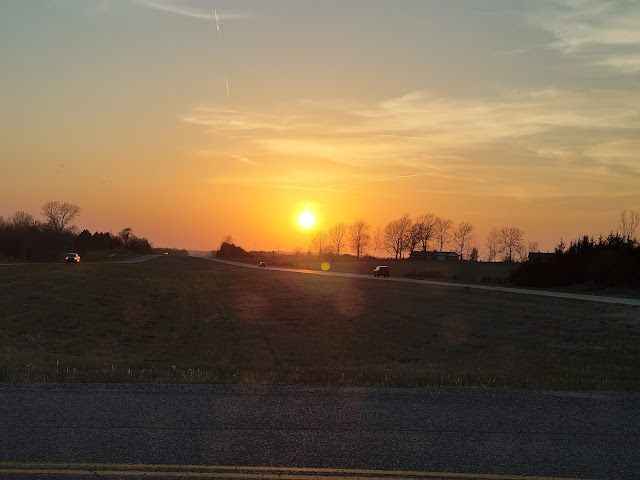 (taken on the way to the Easter Vigil last night)
LUMEN CHRISTI
(Light of Christ)
DEO GRATIAS!
(Thanks be to God!)
Everyone have a great Easter season!