Ready for the Cold Snap 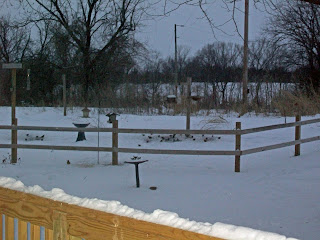 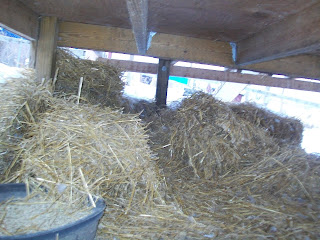 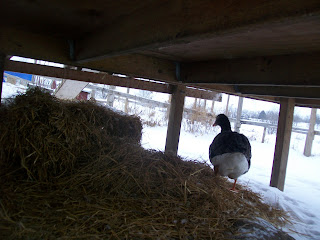 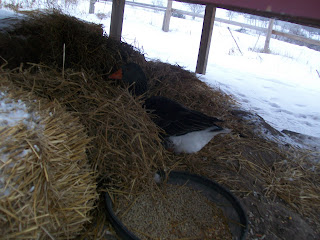 Weatherman says it's going to get down below zero several days and nights this week, with wind chills fifteen degrees colder. Now they say that we will have four to six inches of snow on top of what we have.... for Iowans or people farther north, a dozen inches of snow is nothing... but ours is snow-ice-snow-ice-snow.... and treacherous for walking while doing daily chores. So far we have had only one fall, but we watch as the horses even pick their ways carefully across the frozen yard. Lilly Ann comes in and cleans the little ice balls from between her silky toes, and we know she dislikes it. The big dogs have been staying in as much as possible, and the little girls staying in 99% of the time.
We have made as many preparations as we can, and now are going to hope for the best. Tonight we put a heater under the waterer in the little henhouse. We did not anticipate it getting this cold, so had not gotten one, but tonight took care of that. Now, with their 250 watt red bulb and the heater, they should have enough heat to tide them over. We are not letting them out at all this week. One little rooster, Buddy, has been ostracized from the little bunch by his bigger brothers, and he sits alone on the cold roost, while the others huddle under the light. I am hoping I don't find him dead going out one morning this later this week. There is straw where he is, if he huddles in it, it would help him.
The heated galvanized trough kept the water drinkable for the horses today. We had hesitated to connect it, because we thought everyone would drink from the lower heavy plastic trough with it's heater, but there is not enough room for llamas and horses in the horsebarn, so the horses are in the yard for the duration of this cold spell. The water is clear today, but will get dirty soon enough, with our Old Gentleman dropping feed into it as he drinks.
The geese and ducks are able to drink from the low trough, if they would go out into the pasture and around the corner of their pen, but it's hard for them in the snow and ice, and they are sticking close to their doghouse, and Fort Apache. Tonight, all eight were in Fort Apache, but I know the two big ganders and the goose, Nancy, will head for the former "Duck House" to sleep. I'm hoping we don't lose any of them, but it's taking a lot of effort to get food and water to them several times a day. Our feed store man said tonight that everyone is buying triple the feed in the last week, since all the animals are eating to stay warm.
Last but not least, the little wildings had eaten every seed put out for them today. I loaded them up, and hopefully Keith will be home early enough tomorrow to put more out. They drink from the rubber trough by the dozens, too.
Posted by Mary Ann at 7:26 PM