Sitting in the Window

Friends, I still have post-Covid exhaustion.

I am trying to keep up with posting, but, my goodness, my yard work is suffering!

I'm glad Jax has been able to help a little. 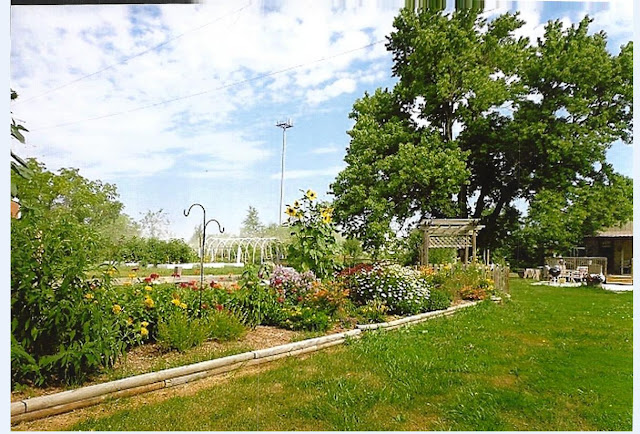 Do you see the arbor in the middle?  Keith built that as almost the first thing he ever built here.
It still stands, though it took a direct hit from a branch this summer, but Ben was able to repair it.
On either side of it were four beds about twenty five feet long.  One bed was in the shade of the maple tree you see.  The big bush like thing on the left was an oakleaf hydrangea.
These beds were gorgeous in their full bloom.  I mulched them with straw... you can see it here...
and they were raised and had to have new bags of dirt poured in yearly.  My gosh, they were beautiful.
I wish you could see what is left!  There is still one, sort of.... on the side where the maple is.  It is full of
horrid maple seedlings that I  cut out over and over and over.  But there is still some yarrow growing there,  and the hollyhocks have re-seeded themselves.  All other raised meds were taken out by Ben. I have one left, and Jax is helping me re-do it.  We are waiting until next week, for some reason we are having a blast of summer's heat right now.  It is going to be 99 on Wednesday, the day he usually "works".
So... I have about fifteen bags of dirt, bought a year ago.  Jax is going to spread them across the bed, rake it smooth... and then we are going to transplant every iris we can find.  I am going to try to buy some more this fall, and we are going to have a beautiful bed of iris in the spring, I hope! 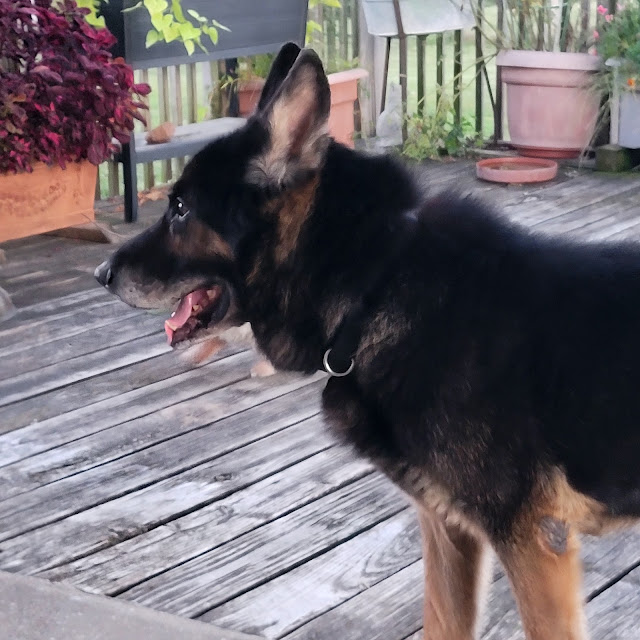 Meet Buddy, or actually, Big Dog, as I call him.  He was found out in the county on Labor Day, and the kind person who found him posted him... then called the Sheriff, who, God bless the deputy,
called the Bonner Springs ACO (who is awesome) and she came and got him.  He was very weak,
almost to emaciation, and could hardly stand.  The vet estimated his age to be around ten or older, which is ancient for a German Shepherd Dog.  The vet believes he is purebred.
He has had his shots and been chipped, and after three days, he came to me to foster.
Friends, he is the gentlest boy.  He is not fazed by my littles, by the cats, or by the chickens.  I have yet to hear him bark... the only noise I have heard him make is a groan when he rolls onto his side on the floor.  He had a week of Clavamox for a UTI... and yes, I am crating him at night in Ranger's old crate which takes up a bunch of real estate in the kitchen... but.... he did great this morning while I ran down to the Ag Hall to do something and he was loose the whole time.  I do get up at 1 or 2 and take him out of the crate, let him have a good drink, and then go ouside to relieve himself, then he goes back in and back to sleep.
The cats nearly went catatonic on his arrival... but Mama Cat now comes up to him and boops him on the nose with her nose!  Our routine is that I get him out of the crate about 5:30, and he goes out on the porch, relieves himself, and I put the cat food out so the cats can start eating breakfast.  They ignore him. 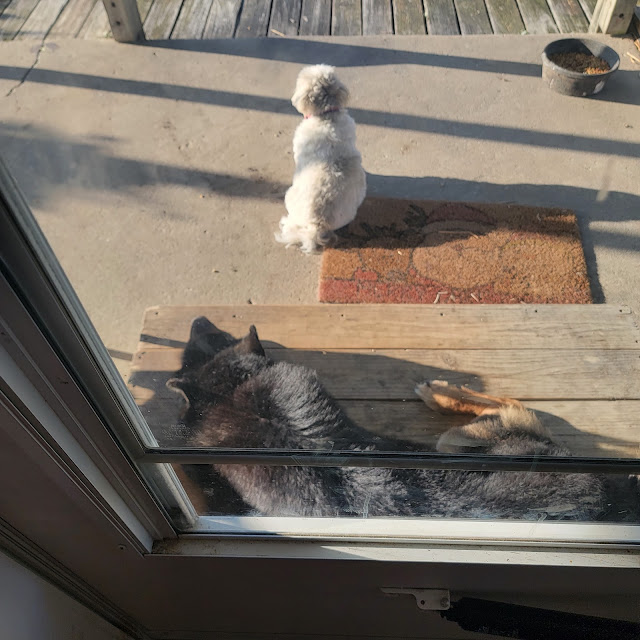 He lays on the doorstep.  He and Zoey were guarding the door this morning before it got hot.
We all took a two hour rest this afternoon, then everyone had a snack.
My friends have been teasing me because I failed with my last two fosters... Zoey and Fritzi.... but....
I think this guy deserves a home where someone will cherish him in his final year or two  and devote themselves to him.  He had a lot of people interested in him... but no one came forward to fill out the forms to foster.
The thing is, I can put him out on the porch when I am getting tired of stepping over him, and know that he will stay close and be within recall.  It's comforting. 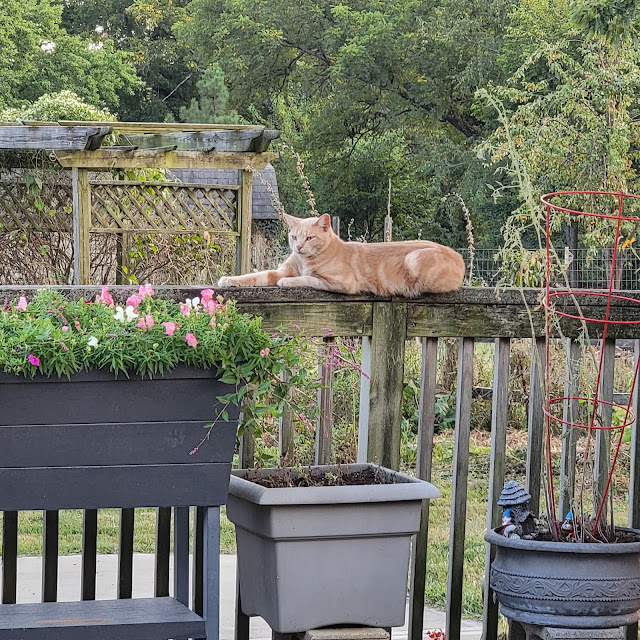 Bullseye was not too sure at first.  I will say that Bully and Molly, the two inside cats, are cautious when they come through the door, still.  I don't blame them, he is bigger than anything ever here... and Ranger has been gone a long, long time.  (Ranger was our black/silver GSD that Keith rescued in the county and we brought back to health.  He was our beloved companion for 8 years) 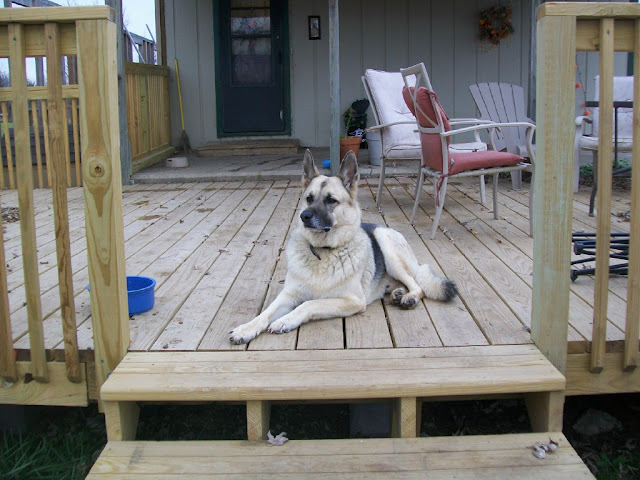 Our beloved Ranger Boy.
So you see, there was a "Big" here for years. 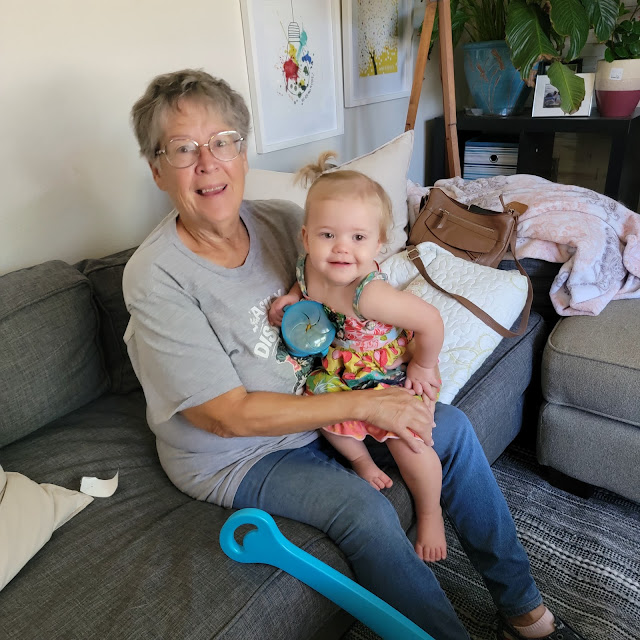 Guess what?  I made another trip to the country last Sunday!
I went to Garnett, where my two oldest grandsons have lived for years.
It's about 70 miles away.
This is Aurora Jane Rose, daughter of my grandson Nathan, who was at work.
She is just a doll, and so fun to be around.
Two weekends and seeing my grands and great grands was a lot of fun! 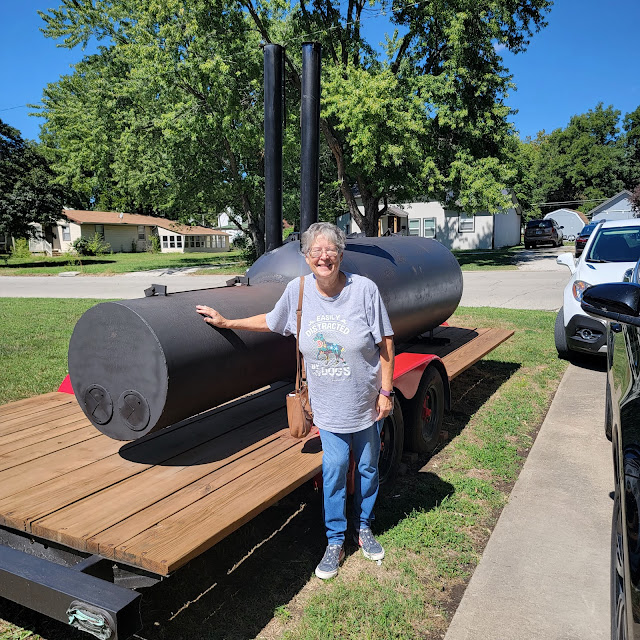 I am including this picture because it cracks me up!  My former daughter in law lives in Garnett, and her partner is a barbecue aficionado.  I could not remember on what street she lived, and she said
"Just come down the street until you see the giant smoker in the front yard".
Boy, she was not kidding!
I had her take this picture just as I was leaving! 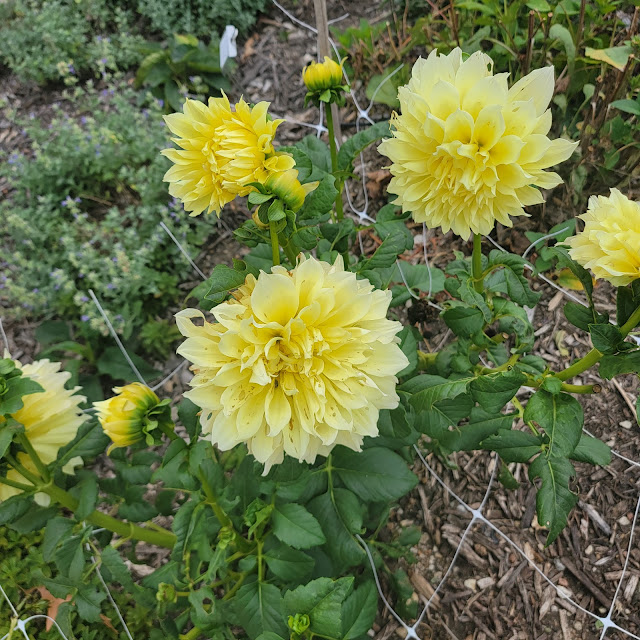 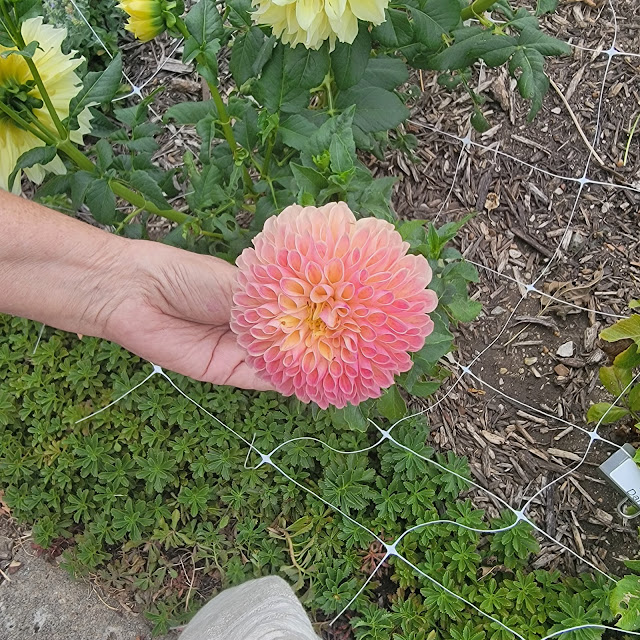 These are beautiful dahlias from the Wyandotte County Master Gardeners garden in front of the National Agricultural Center.
They make me want to grow dahlias next year, they are so gorgeous!  My friend and fellow volunteer Jan held the pink one so I could take pictures of it. The beautiful full moon as it faded this week. 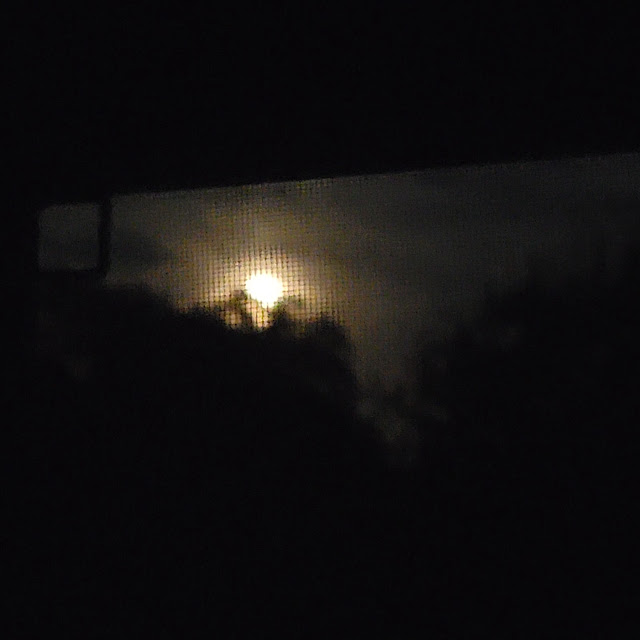 And the moon setting through my bedroom window as I got back in bed after letting Buddy out one morning. 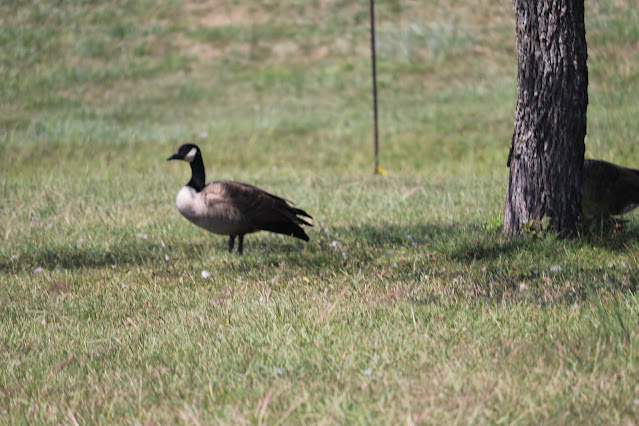 This is a gander at the Ag Hall on alert last week. 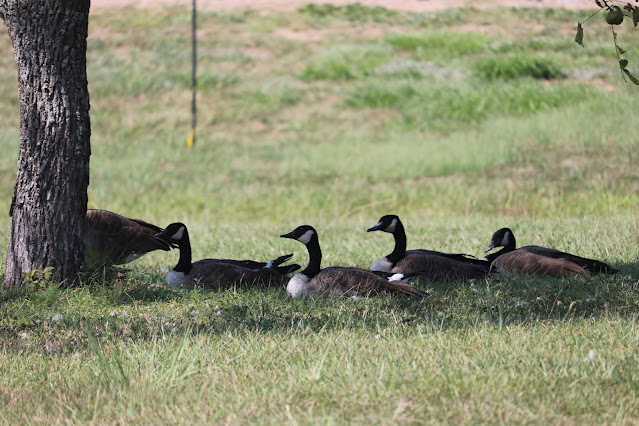 And his ladies in the shade behind him. 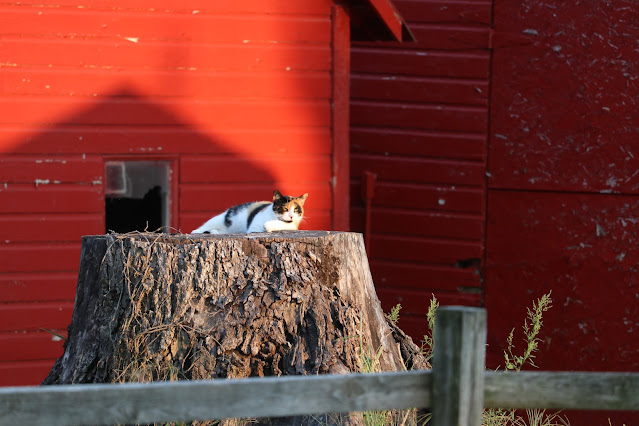 The gorgeous Cleo likes to watch from afar.... and I am still feeding her at the Little Red Hen House.  However, yesterday morning I saw her come up on the porch to eat, so I know she knows where to find food. 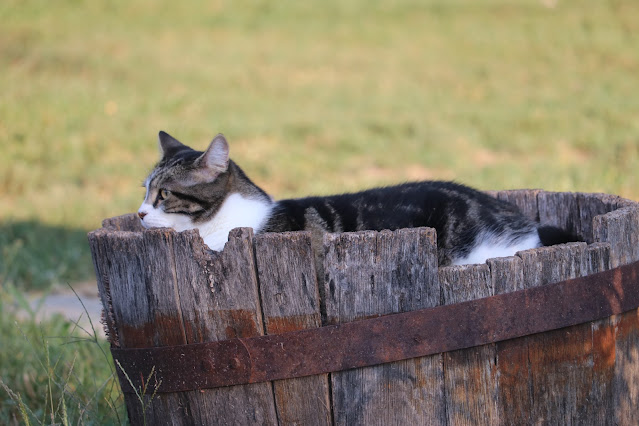 Molly Ann.  Both she and Bully like to lay in the cool dirt in this barrel planter from which Jax and I pulled the tomato plant. 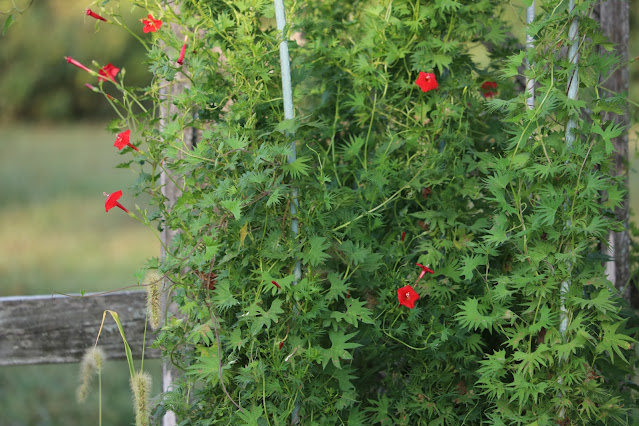 Cardinal Vine... a very late planting, I threw a bunch of seeds into a big planter in the only garden bed left - the overgrown one... and what a reward!
Why did I call this entry
Sitting in the Window?
Two years ago, during the height of the pandemic, I bought a desktop computer . It literally sat in the the closet until February or March of this year, when I had the young man from the computer place I use come out and "install" it and hook it up to the printer in my office.  That day, he put the old computer, which had been Keith's.... on my kitchen table to get it out of the way.  He had to connect it for some reason... I don't remember why.... and he left it sitting there when he left that day.
This is an eight year old HP computer.
I am still using it daily, I LOVE to sit at the table... watch the garden... I can see the chicken houses on the west side of the yard, I can see the two bird feeding stations.
The dogs are either under the table or behind me, and it is just so to my liking.
I had it facing out to the road for a few months, and I could glance up and see the television... but here, the television does not usually get turned on until time for the news.  If I have to print something, I send it in to the "new" computer (which is surely now outdated, too) and print it in the office.
I like the "new" computer, don't get me wrong.  I had a lap top for a while, but I found it awkward to type on, and I did not like having to balance it all the time if it was not on a firm surface.  Call me old fashioned, I don't care. (The lap top, which was a used refurbished, molders in a closet).
I like what I like.
So here I sit, watching the world go by in a tiny fashion outside my window.
Soon, it will be cold again, and my electric heater sits here, ready to keep me warm as I read and type.
It suits me.
Everyone have a great week!
.
Posted by Mary Ann at 4:11 PM