Friends, with all the sadness in our world today... wars... shootings of innocents, whether adult or child... we need to focus on the good as much as we can. 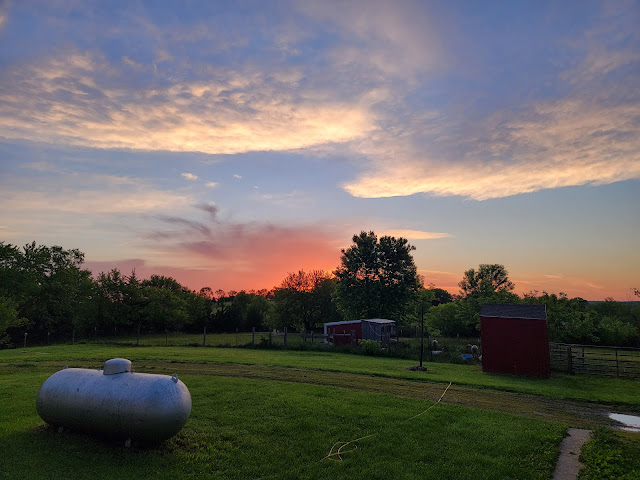 Every new day brings a fresh slate.  We can make it a good one or a bad one, depending on how we respond to it.  Our cares can drag us down, or we can rise above them.
I am on the "trying to rise" side.
Please enjoy these pictures I have taken the last few weeks. 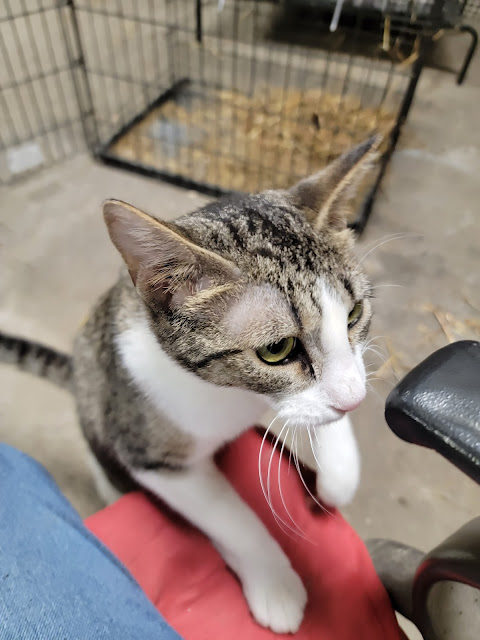 This is little Teenie Tinie, the little kitten who was in heat when she appeared here a few months ago.
I had her neutered by the wonderful organization "Leavenworth Animal Welfare Society", or
LAWS, who do free and low cost spay and neuter clinics in Leavenworth, Kansas.
She brought this: 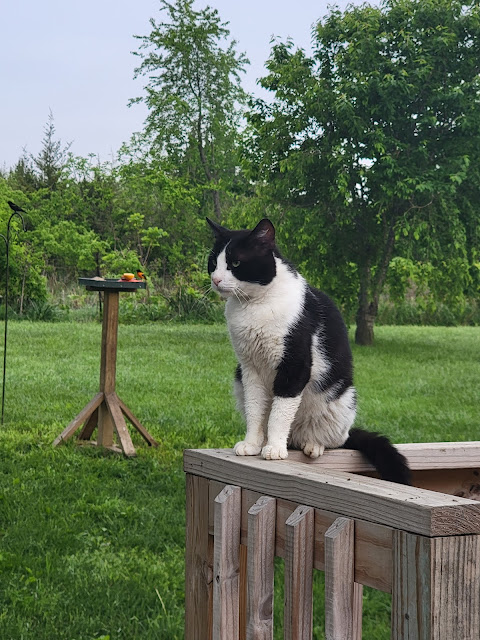 Jack Flash
He ran both Yeller, and my dear Rusty, my first feral rescue cat, off the property.
He hates Coco, for some reason, the black female.  He has attacked her viciously.
He wants in the house, but everyone is petrified of him.
Cleo, the beautiful calico, will no longer come near the house, and I have to watch for her and take her food to her on the fringes of the yard.
Jack doesn't know it, but Tuesday morning, I am calling LAWS and discussing how to get him neutered.  IF the neuter does not help, I am afraid he will have to go to the Humane Society as neutered and with shots.  He will let my son and me pet him, and I believe I can get him into a carrier to get him to the doctor. The problem is, I cannot guarantee a day, hence... I need to talk to LAWS to figure out what to do.
At 4 AM daily, he curls up in the chair nearest the front door... and waits for me to deliver his
breakfast to him around five or five thirty.  I'm very well trained.
I was going through the kitchen one day last week and looked out the window and saw this: 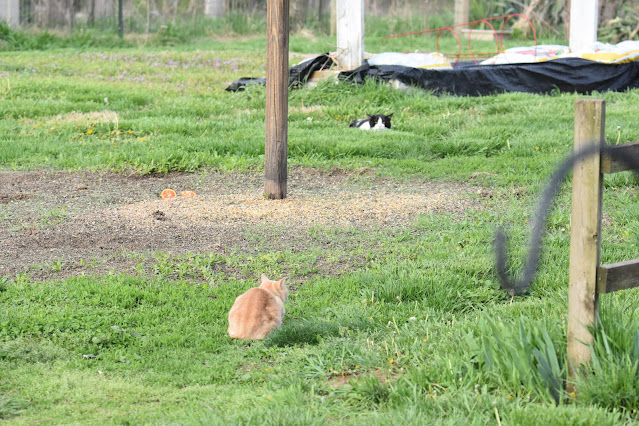 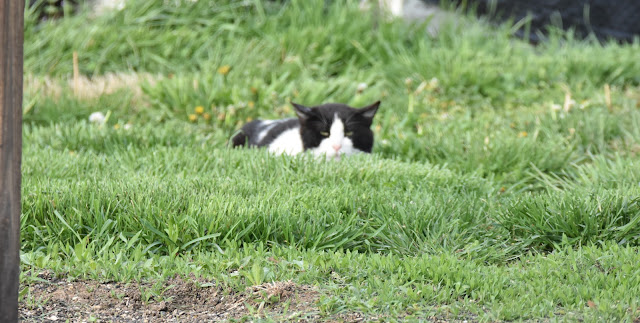 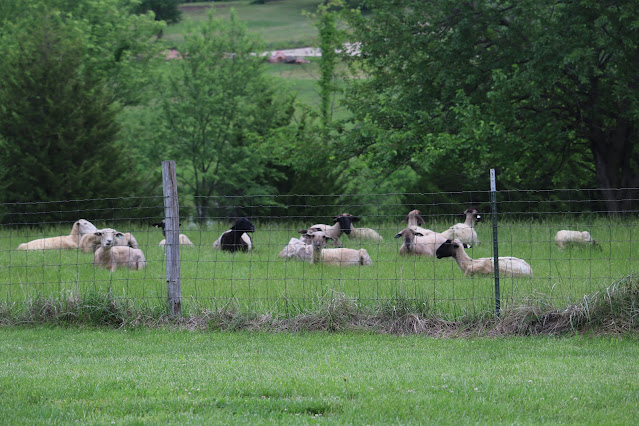 They are baccckkkkk.
Two weeks ago, the family to whom I gave my sheep, and who have used my pasture these
last three years, dropped off a group of ewes to be bred, with their ram and Mama Goat, who was
here the last two years.
Unfortunately,
this kept happening: 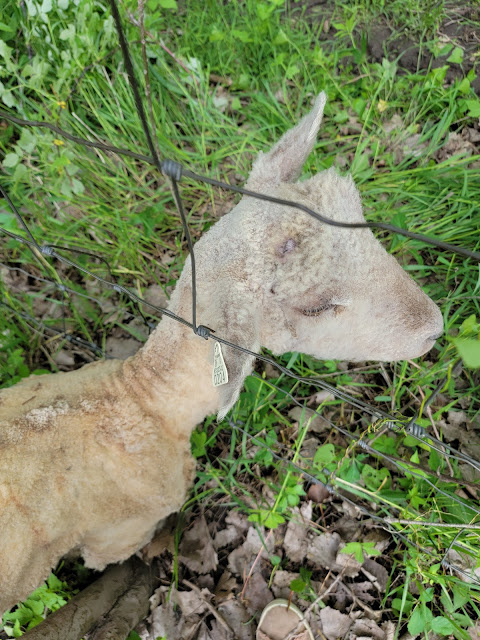 Sheep 204, a Southdown Ewe, kept getting stuck in the fenceline.
Troy, Kathy and I all cut her out multiple times.
You cannot tell from this angle, but she was on her knees, caught fast,
with her butt up in the air.
Then Mama Goat remembered she knew how to jump the fence in the southwest corner, and I found her in the hen house, inhaling chicken feed.
So, last Sunday night, Sam, their owner, came over and loaded those two out and took them home.
There were no more stuck sheep during the week, thank heavens, because it stormed off and on
for three days. 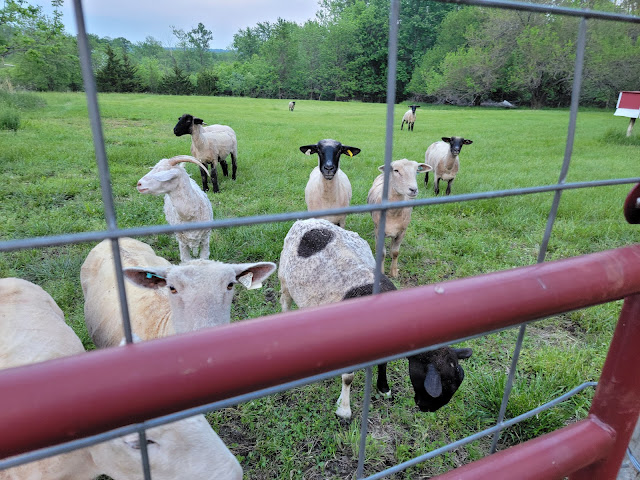 It's nice to see happy faces at the gate in the morning.
There's Mama, I was sure sorry to see her go. 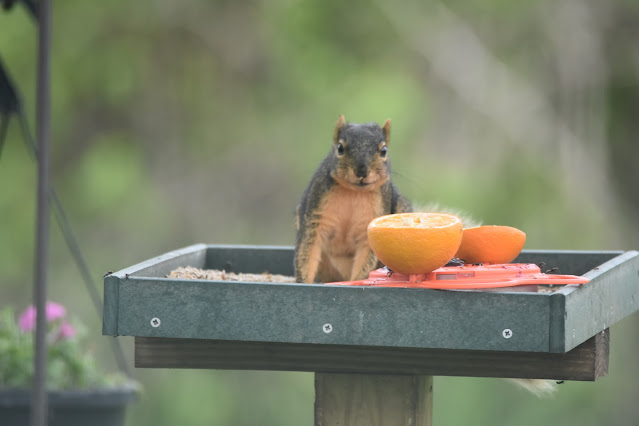 The finches aren't the only ones using the finch feeder. 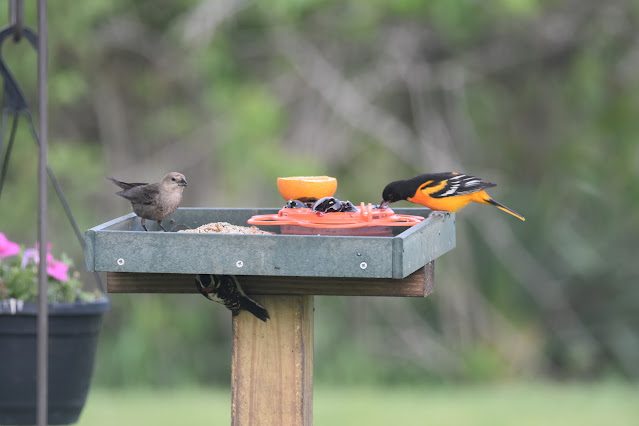 These pictures were taken through my kitchen window. Let me just say that I have never had Baltimore Orioles stay like this year.  Usually they are here on stopover, about two weeks, and then disappear until the next year.  I just looked back to see when my first pictures appeared, and it was the third week of April.  It is now the fourth week of May, and they are still here.

There is a woodpecker hanging on to the bottom of the feeder... do you see him? 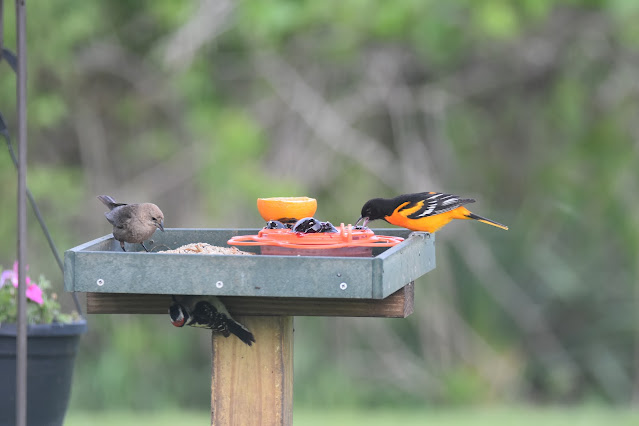 You can see him a little better there. 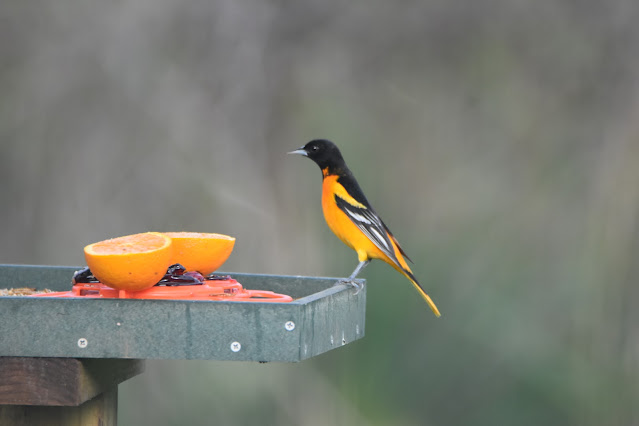 Their color is so brilliant. 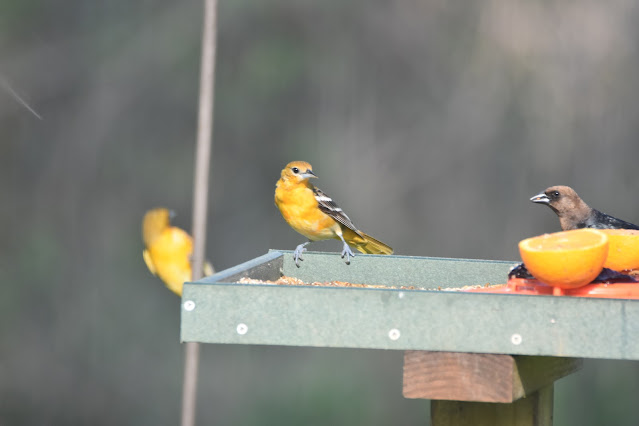 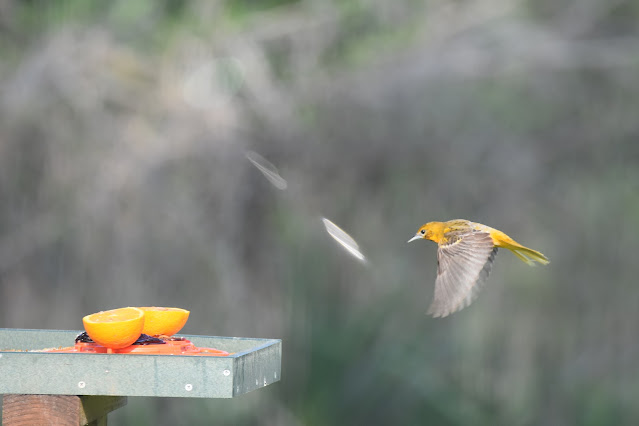 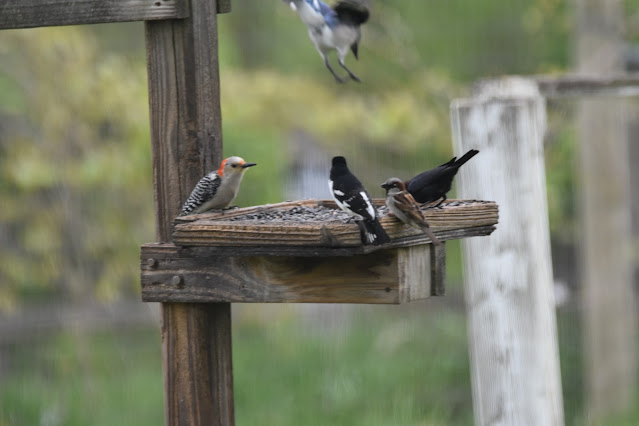 I had a rose-breasted grosbeak for about three days.

That is he, with his black/white back to you at the feeder.

I never got a front-on picture of him!  I SAW him going back and forth as I did chores, but just could not get a picture.

By the way, I am no longer feeding the expensive bird mix I fed the last ten years, I just could not sustain it.  I am buying a Sam's Club Member's Mark mix, it is mostly sunflower, but what I am finding is that the birds are eating almost every single bit of it, there is little wastage.  Sam's was out one day and I bought a bag somewhere else... it was almost 50% wastage.  I stocked up at Sam's, and will continue to do so.  I don't replenish during the day, except if I check in late afternoon and there is nothing left, I will put a partial scoop out because the cardinals feed so late.

The raccoons are getting nothing but some spilled shells, and... I notice there are not near as many coming.

Ben, my yard helper the last two years, is working for me one more summer.  He has earned an academic scholarship to the University of Arizona, and will be leaving in August to pursue studies in genetics.  He is going to rebuild this platform feeder that Keith built ten or twelve years ago, giving it a hardware cloth bottom and sturdier frame, as it is now crumbling.  I am so glad for Ben, but also, sorry to see him go. 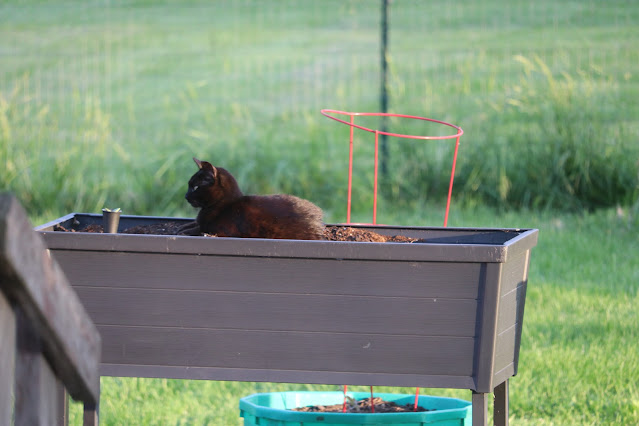 I looked out the window to see Coco in the planter last night.  She has wanted in so badly, so about an hour later, I caught her and put her in a carrier and brought her in.  Coco came from a feral colony, and for some reason, Zoey, who likes all the cats, even Jack Flash, does not like Coco.  I put her in my office where there is food, water and a litter box.  She spent the night in there, and about an hour ago, I took her outside, once I was sure Jack Flash was gone.  He hates her, you see, and has wounded her back.  I have been putting medicine on her and will get her to the vet this week if it does not scab over well.  I can see her walking back and forth on the deck right now, as I look out the door.

We are expecting strong storms tomorrow afternoon, and she will be coming in again for a while to be safe.  Wanda prefers the hen houses, Teenie stays in the shop, and there is a dog house on the porch out of the wind and rain for Jack.

Cleo is living over in the wild area across the road again, as far as I can see.

There are two peripheral cats, Lilly and an unnamed gray tabby (who was on the porch this morning), but they usually eat in the garage.

They live under Troy's storage building. 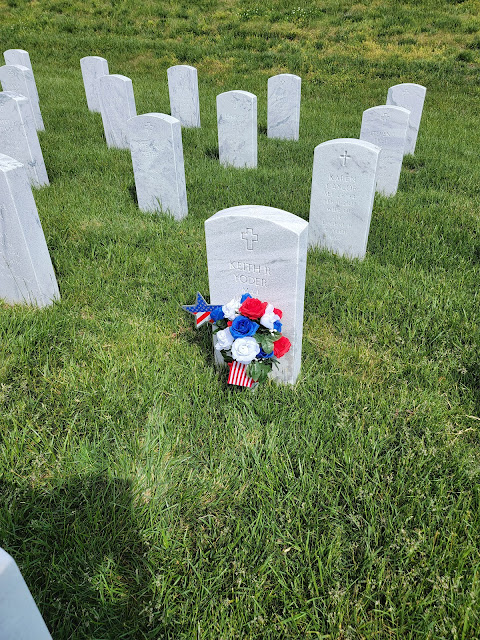 The reason we "celebrate".
Remembrance Day.