I've never written a post about a chicken before.

Oh, about chickens... but not just one, I don't think.

As I type this, Big Red is living out her final hours.  She does not appear to be in any pain, and is comfortable in the big hen house, where she has lived the last three years.

I don't name many chickens... I read (or used to read) blogs where chicken keepers named every single girl, and wrote about them individually.  I have had pets here before, but I rarely name them.  They are, after all, chickens.

Five years ago, a wonderful hatchery donated fifty mixed chicks to the National Agricultural Center, where I volunteer.  There was a day camp there then, and an education director, and he and the children took most of the care of the chickens.  I went in on Saturday and Sunday to feed and water, at least the Saturdays he was not scheduled to work.  The following season, the same hatchery donated 24 cochin chicks in all colors... to join the first.  Yes, it was quite the flock.

Again, the kids and the education director had primary care of them.

At the end of the season, the ed director had resigned for a different job, the day camp had ended.  I took over caring for the birds.  When we closed for the year, we dispersed the flock so that someone did not have to care for them through the winter, as the remaining two employees were not chicken lovers.

We parceled them out to friends of the Ag Hall, and I brought some home here.  I still have a few of them five years later.

The subsequent two years, I took a group of birds to the Ag with which visitors interacted. They lived in the big chicken coop, but part of the problem was that they had to be shut up every day around four, because there were again, only two employees.  I took care of them on weekends and holidays.

Last year and this year, because of the pandemic, we had no birds at the Ag, and because of the re-construction of a new ice house, their yard was actually taken down and will have to be reconfigured if the decision is made to have them again.

Back to Big Red.

She is a Buckeye.

They are not prolific layers, and can be used for meat. She never laid very much.

She is a handsome bird, though.

I had numerous red hens, but Big Red, with her small comb, Medium Red and Little Red were all distinctive.  Little Red died earlier this summer, she had caught something in her crop or throat, and I had asked a neighbor to put her down, she could not eat or drink.  When he did it, something flew out of her neck, he thought she had had an obstruction. 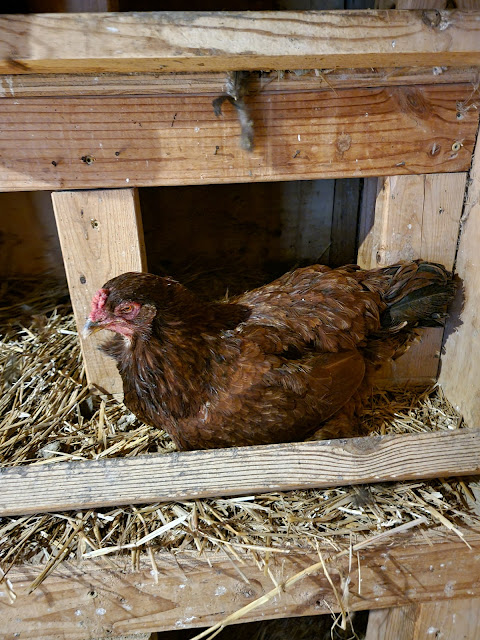 Here is Big Red the morning of the 27th.  Her comb is faded, her eye not clear.
You can see how pale her face is, and I knew something was wrong there.
She had always been one of the first out of the coop in the morning, and one of the last back in at night.
I started watching her that day.
Over the next week, she faded even more.
Yesterday, she actually came out with the others from the big coop. 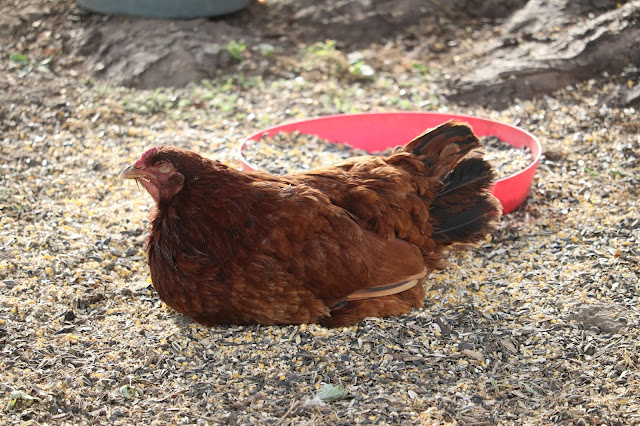 I looked out the kitchen window about five PM to see this.
I knew she would not be able to get back to the coop, across the yard, on her own.
She is laying near the dish I use to feed the squirrels.
I put my phone in my pocket and went out to pick her up, and was stunned to feel
that she weighed hardly anything.  She used to be a big, heavy bird, but was
clearly skin and bones.
I set her inside the coop, but a few minutes later, I realized she had come out on the porch.

She did not eat anything, or drink... I stayed out there a while. You can see how sad her feathers look,
something sticky got on them and they look awful.
Now, you ask, is she suffering?
I don't think so, I think she is just shutting down.  She has stopped eating or drinking.
She is not struggling to breathe, or anything.
I took her in and sat her down near the water. 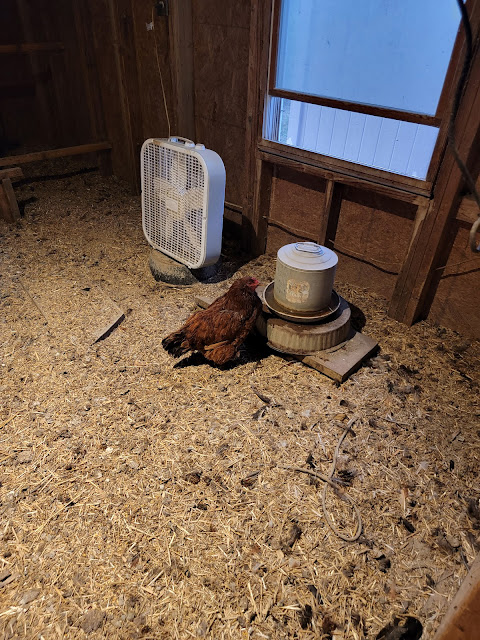 See how her wing is drooping down?  She can't hold it up.
Today, I was going to shovel out that coop, since my straw came Friday, but I am
waiting.  For Big Red.
I thought surely she had lived her last day. 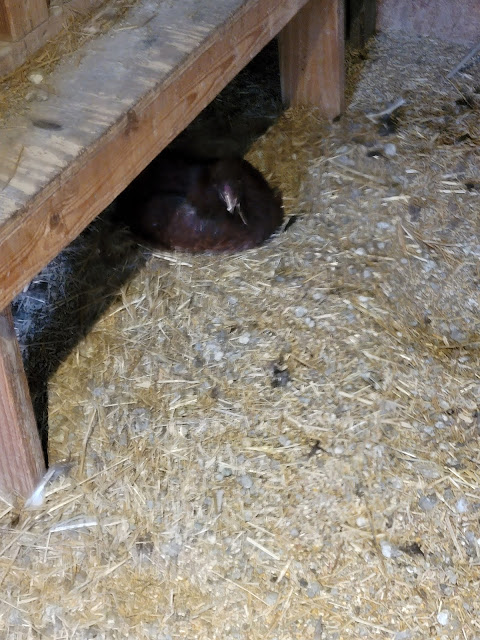 This morning, I found her here, under the nest boxes.  She is unable to get on the roost.    She is not eating or drinking at all; I put some scratch in front of her, and I actually wet her beak down three or four times, and put water near her... she does not want it.
They know.
I have been out three times to check on her, it's now 12:25, and she was still alive thirty minutes ago.
If Keith were still alive, I would  have had him put her down three days ago, but I am a coward.
It is my biggest failing as a chicken keeper.
Again, I don't believe she is suffering... I think her body is just shutting down.
As of today, there will only be eleven hens and two roosters in that coop.
(I don't count the two silkie hens and chick that live in the brooder pen at night and go out to their pen during the day).  There are very few of the Ag hens still alive.  My chicks I raised this year are
the main egg layers, and none is laying a big egg.
In the old coop, there are only three hens and a rooster.
In the little hen house, there are two silkie roosters, 7 pullets that have now come into lay, and of course, the two tiny silkie hens. 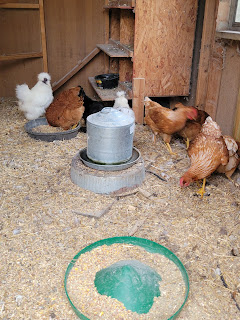 On Thursday, I went outside to walk across the yard to the shop, and found a three year old hen dead in the middle of the yard.  NO clue... she appeared to be a healthy bird.  No warning, and this is how it is with chickens, they are prey animals and hide anything that is bothering them.
Big Red, though... will be a loss.
On the seventh, at 6:30 in the evening, I started out to lock up the birds.
I saw this: 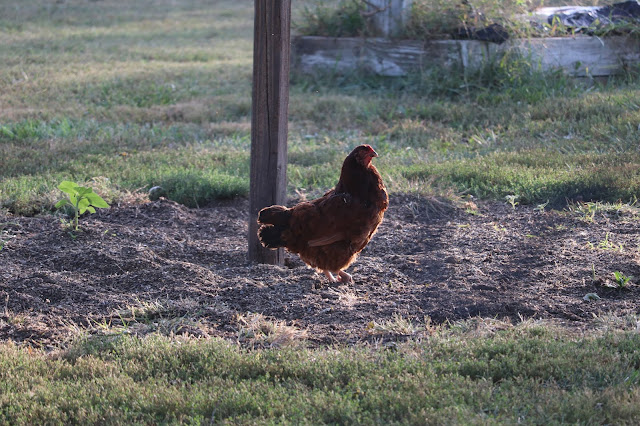 My beautiful old girl, warming herself in the sunlight.
She wasn't eating, she was just.... sunning.
She made it back in under her own power.
You were a good bird, Big Red.