The Results are In

I wanted to post and let you all know about my results with
my deterrents for the raccoons.

I am happy to report though, that there was only ONE on the porch last night,
they have finally accepted there is no food there for them anymore.

I hung a shoplight out there.
At least they could see what they were eating, (laugh)

I also put bread with cayenne pepper CAKING it, I thought I would have to
pick it all up the next morning.....
it was all gone.

I have two large bottles of Franks Hot Sauce and an almost full canister of
cayenne, if anyone could use them!

Terri suggested last week using ammonia, I may try that, however....

I have had such good progress with them staying off the deck, and I have
so much fun watching the birds, I will continue with locking anything up that the
raccoons could eat at night, suet, birdseed from the top feeder, the hanging finch feeder, etc.,
and go from there.  The two ferals are eating during the day, thank heavens. 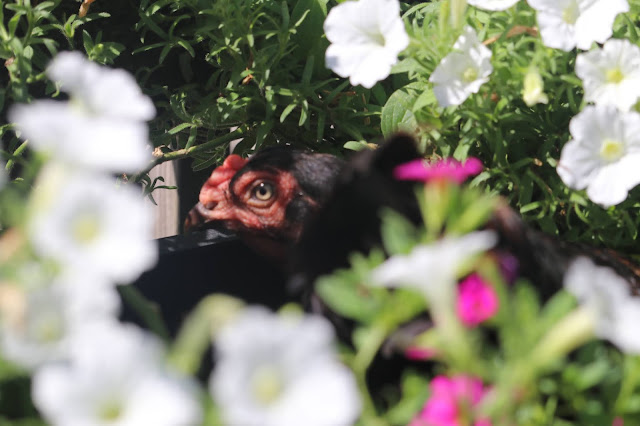 Yes, she is still laying in the flower box on the deck.

She is four years old, and a Cornish hen, I would NEVER have imagined this.

She lets herself out of the "chicken side" of the yard and comes across,
eating a bit of birdseed, and then makes her way up onto the deck and into the
flower box.  She proceeds to lay a good-sized egg, and takes herself back to the others.
It cracks me up. 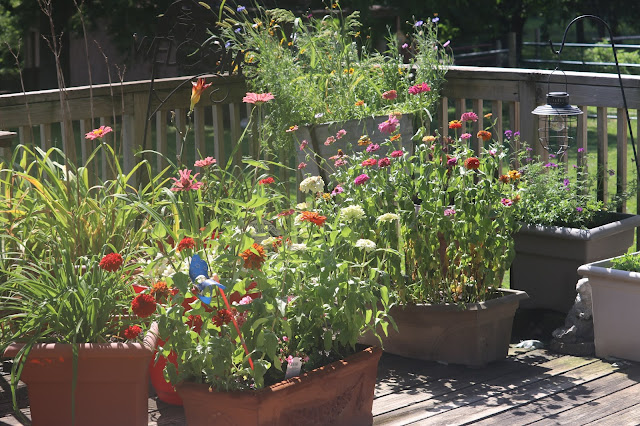 I took this on the deck yesterday.  I absolutely love the "wildflower garden in a box" flowers in the washtub.  There are batchelor's buttons, a small white flower, and some tickseed, as well as
grasses and what we would call weeds.

I planted a lot of zinnias because, frankly, I was staying at home and trying not to go
to garden centers, and I had a lot of seeds from the past two years.  Here is
the thing... those planters are too shallow for the cut and come again variety.
I am having to water multiple times a day, but oh, how I love zinnias and so do the few butterflies I am seeing, and the hummers, which have become numerous these last few days. 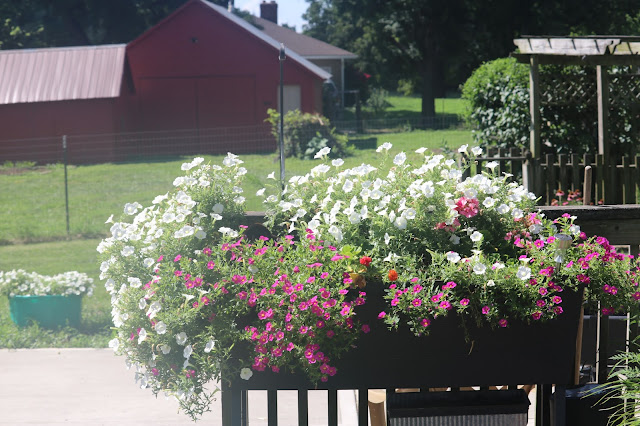 The "nest" flower box.  I got these three planters at Sam's Club a year ago, I love them.
There is one full of mint that smells so good after I water it, however.... I am digging out the
mint this fall and replacing the whole thing with flowers for next year. 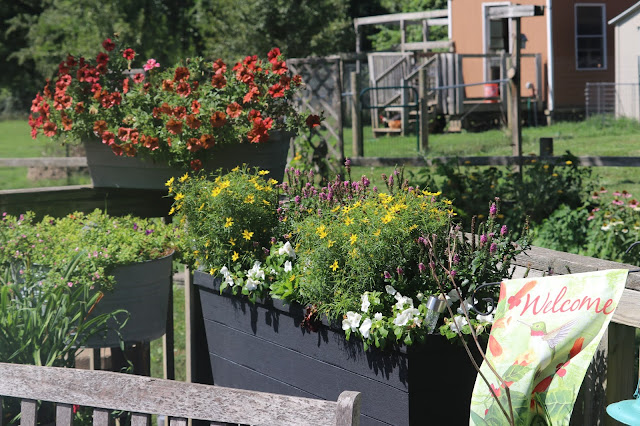 The other side .... I don't really like the petunias in that box up on the
railing... there is a tiny bit of geranium in there, I thought they would complement it, but they are actually rust-colored, not pink or red.  Not planting that color again, it fades in the sun.

The perennials in the box in the foreground are doing GREAT.

I never put my summer garden flags out... oh, what the heck. 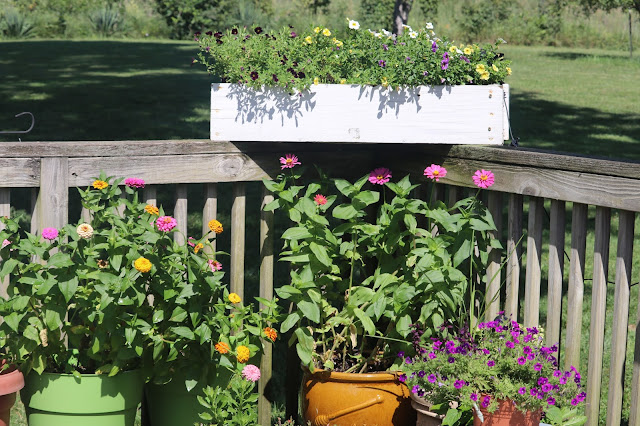 The last corner, filled in with more zinnias.  The calibrachoa in the top
planter is still going strong, you just can't see it in the picture.

My umbrella, though folded in, was caught by the wind two weeks ago,
and overturned and broke my porch table.  That's it for me, that is the third one
I lost over the years.  I am going to try to find a wrought iron smaller table to
put out, as we rarely eat on the deck.

I frightened Rusty when I came out on Friday morning, and he ran for the fence.

When he saw it was me, he waited, and yes, he got his yummy canned food, I went back and
got it for him.  I could tell he had eaten from the dry food.

Some of you know my son Jeff has been staying with me since March,
his hours were cut, and though he owns a mobile home free and clear,  he was
having a struggle making ends meet.

Jeff gets up very early, and puts the dry food out on the porch for me in the morning,
and I can tell from the camera that the two cats are coming to eat.

They do sometimes come on and off the porch during the night hours,
but I also keep a large container of fresh water there, too.

I got another delivery of good pork from Gray Family Farms,
Charles told me he has a contract with Paradise Locker in Trimble to
process hogs every month.

I bought pork from him six weeks ago, and it is the BEST.
Jeff and I are having 1/2" pork chops, fresh corn, and green beans for
dinner when he gets home tonight. 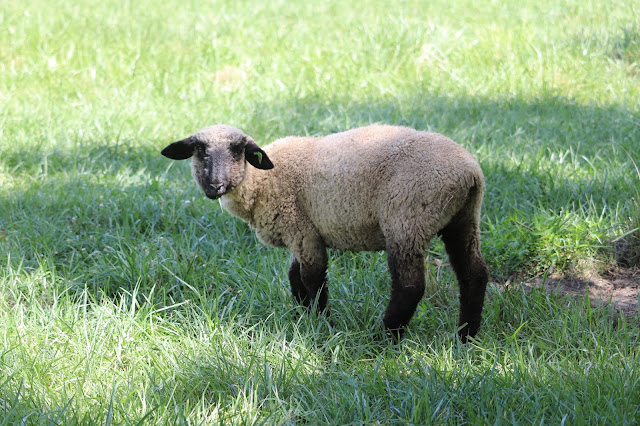 This is 62, one of the lambs that has been here for the last three or four weeks.  The Manuses brought ten, nine ewes and a goat, and then switched them out about six weeks later.  This group had two adult ewes, and seven lambs, and the goat, who stayed. 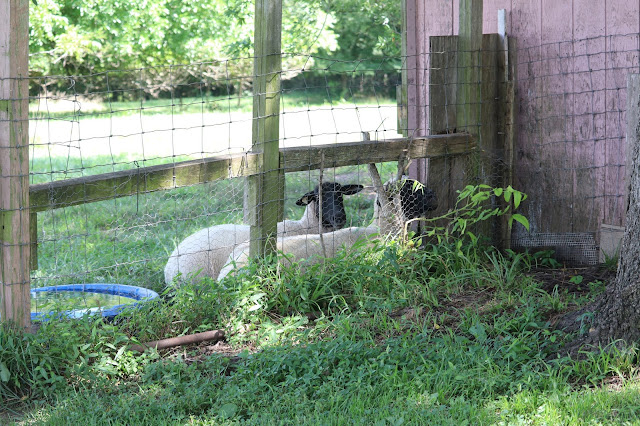 These are the two big ewes.  I keep a small swimming pool there under the shade of the walnut tree, and I refresh it multiple times a day.  I keep the ground all around there damp, and many of the sheep
like to nap there.

One of these ewes had "lumpy jaw", which is mostly incurable.  I told their
owner last night that I am sure that jaw has gone down, and is no longer swollen.
They are coming tomorrow to switch some out... I am hoping not all are going.... and he
is going to look at her closely then. 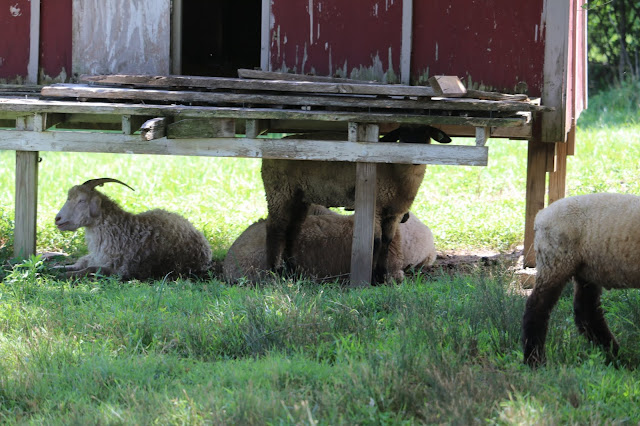 Two weeks ago, the three Manus boys removed the fence (leaning and heaved) around the
old henhouse yard.  This was the first pen Keith ever made here, and the posts were not sunk
deeply enough.  That's the unused little red henhouse under which they are laying in the shade.

I have noticed because of the heavy shade in this area, they like to congregate here in the heat of the day.  That's the other reason why I check that little pool so often.

There is a deep tank in the actual sheep pen which they also use,
I bucketed it out and cleaned it today, I try to do that three times a week.

On Friday, Ben came and removed low-hanging branches for me for two hours in the terrible
heat.  He is coming back on Tuesday to do the weed eating and trimming.  I could not have
kept this place looking so good this summer without his help.  Yes, I pay him, but to find
someone willing to do that work is a blessing for me.

Here are some pumpkins I planted in mid-July... they are
taking off in the raised garden.

I have decided to tear these beds out completely at the end of the season.
(well, not me, the boys).

This was a loving project from Keith, but I cannot handle the hauling of the dirt anymore, and the upkeep.  If you look behind these beds, you will see one is empty now.... and those trellises, etc. are coming down, too.  Weeds grow up between the beds constantly, and they are a fight to keep down.

I am also considering removing the only perennial bed I have left, and gardening only on the deck and porch, I am still mulling that over.  I would actually offer the plants to all my friends, in amongst the weeds there are some good perennials still blooming.  With Jeff's help, earlier this summer, I had that bed cleaned up, or so I thought, and we actually put five cartloads of mulch on it.

It's a mess, I'm embarrassed to show you. 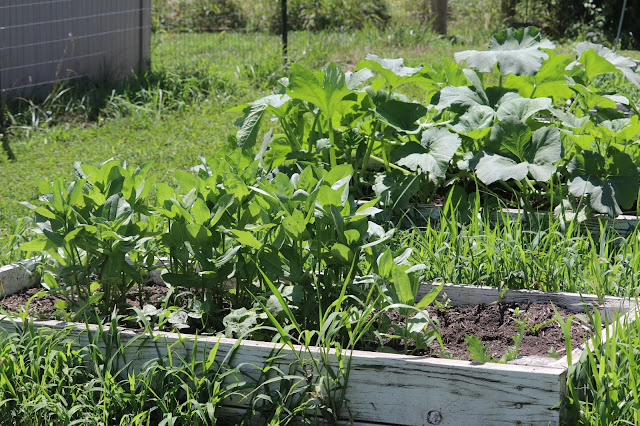 I swear the zinnias (yes, more zinnias) and the pumpkins behind them grew two inches overnight.

Do you see the weeds and grass growing in between?  The beds were made a little too close to get the mower in there and clean them up all the time, it has to be weed-eaten.  Ben will do that on Tuesday.

We are 92, feels like 102 right now, but.... clouds are coming over and rain is expected tonight.

Tomorrow, my little Snowy girl has a mammary tumor removed,
and I am very worried about her.

It means also that I get up very early, get her to the vet, and
get back here in time to feed Fritzi and give her her morning meds,
we have a routine now and Snowy is involved in that.

My little Snowy.  I love her, she has only been here since March but she is a
wonderful little dog.  I am praying nothing happens tomorrow.

Fritzi is holding her own, but her hindquarters are weaker and she has trouble walking. 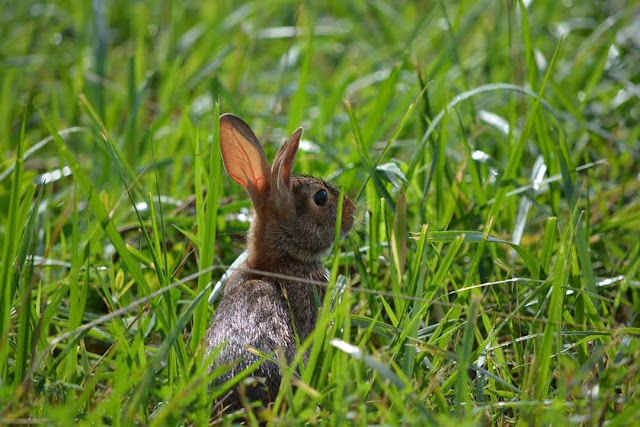