We have had a taste of winter several times in the last month, in fact,
one month ago today, a snow/ice storm pretty much ended our
Santa Express event at the National Agricultural Center.
We had a great Saturday, but wow, that Sunday.
Luckily, I had a ride to and from,
and 50 hardy souls turned up to see Santa in our truncated event.

I thought you might enjoy seeing some winter pictures. 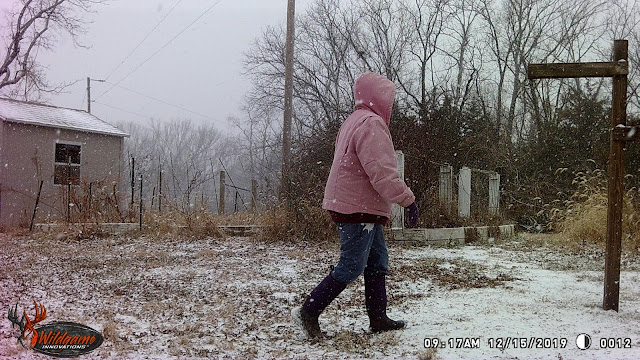 This has pretty much been my uniform for the past month.  Under those jeans and sweatshirts are
Cuddl Duds long johns, two pairs of socks, and two pairs of gloves.
I have a Carhartt watch cap under my hood.

Oh yes, it's a winter wonderland, unless you are out in it. 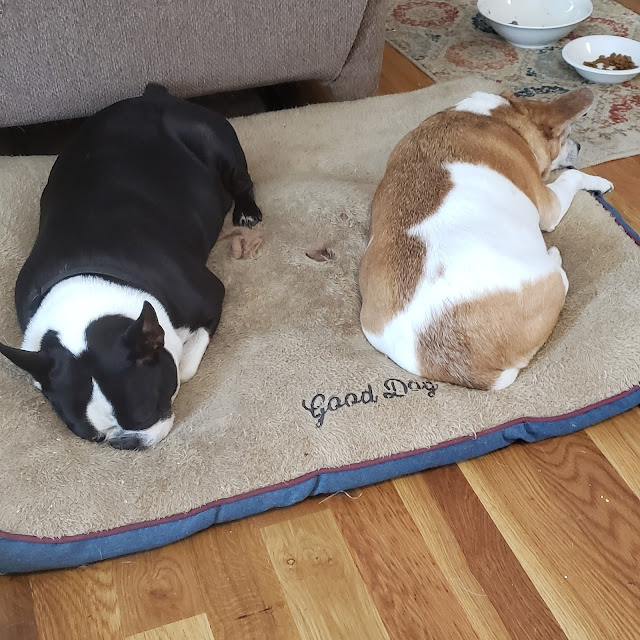 I ran to the Ag that Tuesday morning to get some things I needed
for our Christmas here at home on the 28th.  The skies had cleared by then.

Then we bounced the other way, and we began to have
unseasonably warm temps.  Plants on my deck began to show
greenery.  Dandelions were blooming in the yard.

Some of the older hens began laying again, and I really, really didn't expect this!
I have gotten as many as seven eggs in one day, and am able to share again.

I won't have enough to supply the shelter as I did before... but I have plenty for home and friends. 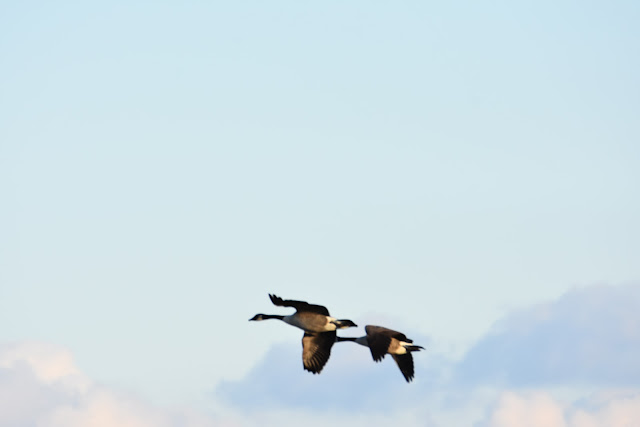 Lots of geese have been moving by, these were over the pasture one day.
I have not seen any snow geese this winter, though, and last year, a flock with their distinctive honks went overhead several times a week. 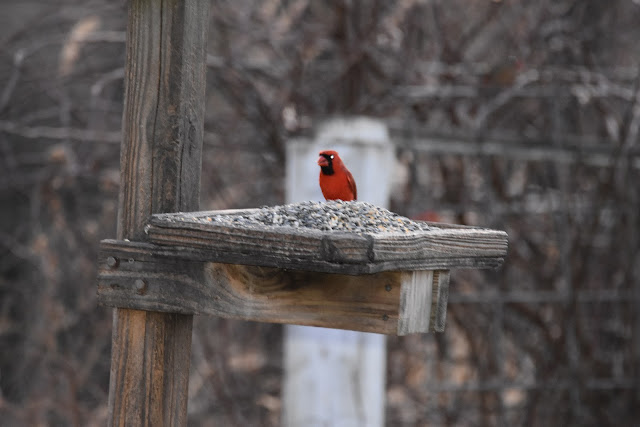 I added up my expenditures on wild bird feed for last year, and
almost fell off my chair.  I have had as many as eight pairs of cardinals eating in the evenings.
I am not going to reveal what I spent, but I could be going to the Cruise to the Edge on
what I paid for bird seed. 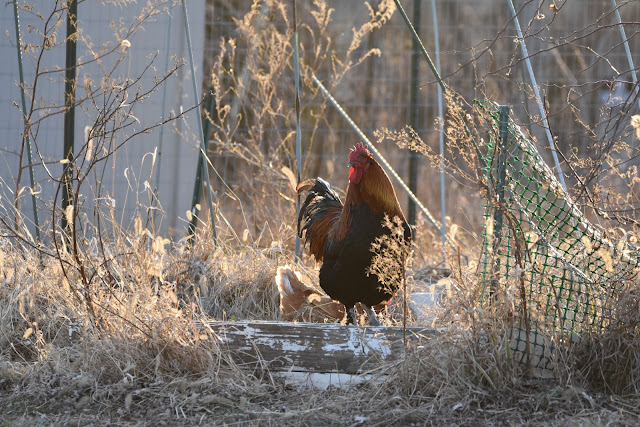 Ferdinand, father of Singleton and Buddy the young roosters,
is beaten up by Singleton if he tries to stay on the south side of the yard,
the "chicken" side.  So, every day, I either let him through the gate as I finish chores,
or he walks down the fence line and comes through a gap at the far west end.
Little Red, a red hen, began following him, so those two are usually in the yard daily now.

This morning I saw them in the sheep pen, he watching for predators as she turned over
the hay pack.  However, they didn't stay there long, remember, a coyote picked off chickens
there last year.

I usually find them below the feeders, but they also have a bowl of feed near the
deck. 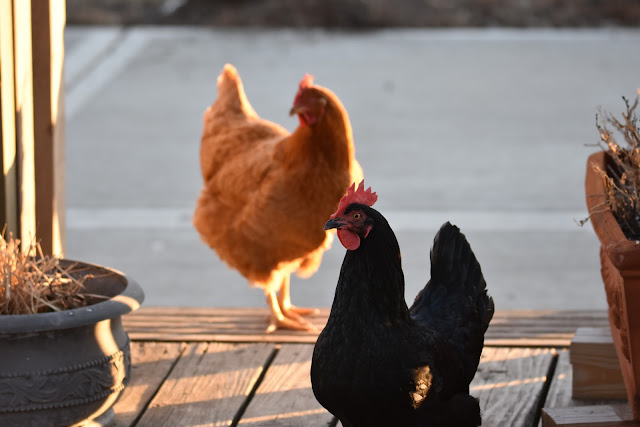 One day last week, Little Red snuck another girl out with her.  Thank heaven, they have not
all figured it out, because then I would have to block Ferdie's escape route. 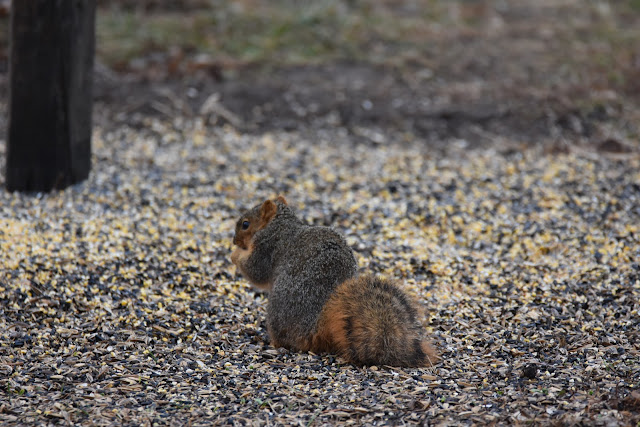 Here's another critter keeping me from cruising.

The sheep have been pretty happy. 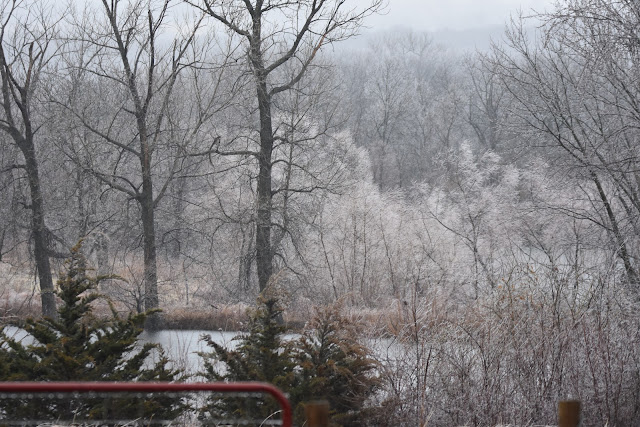 Then, last Friday, it happened again.
That's ice.  I am petrified of falling, if it happens and I break something,
I am done here. 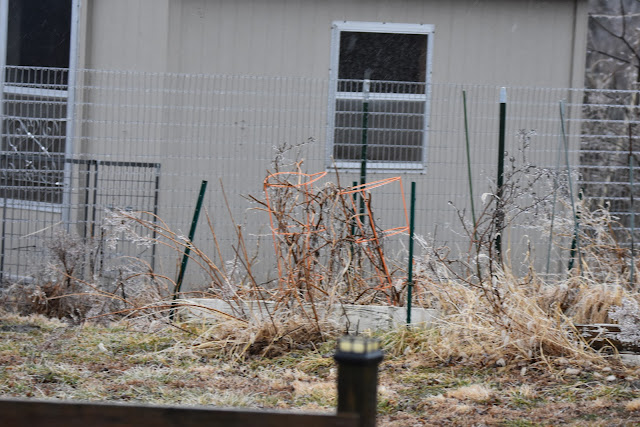 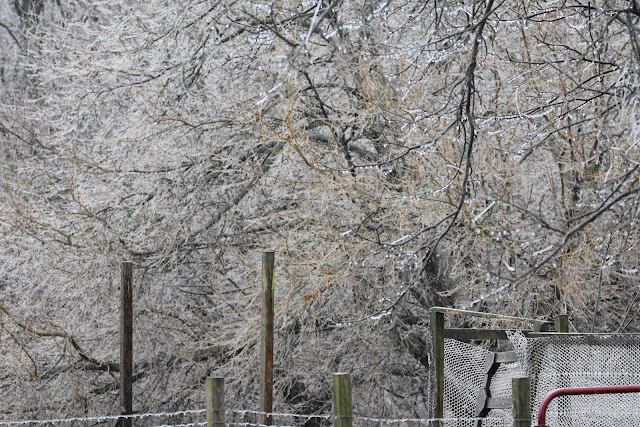 So beautiful.  So cold.

We got four inches of snow on top of the ice, and if I could get the pictures in my phone to transfer to the computer, I could show you all the cool tracks in it. 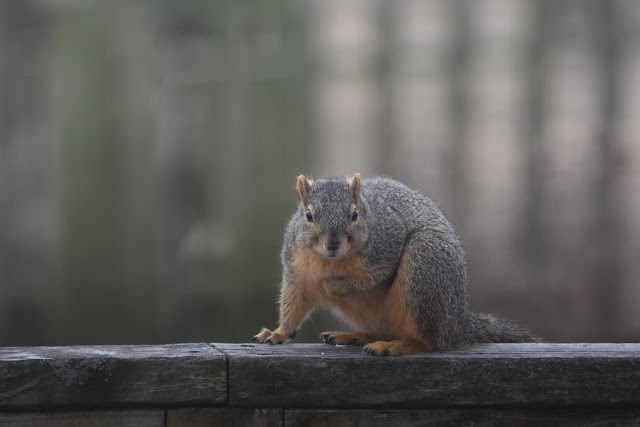 It has melted now, and I have moved five bales of hay
from the old garage storage building to my little hay barn,
in prep for yet another storm this weekend.

I am not complaining... but I can tell you that I AM tired of
going back in forth in many layers, carrying stuff and stumbling over the mole/vole hills. 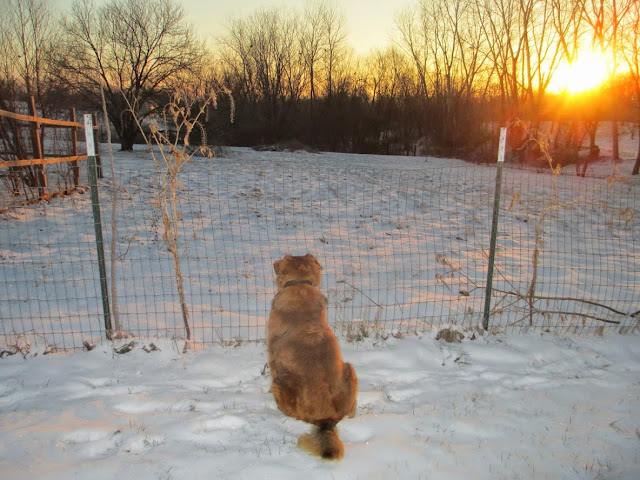 This came up in my Google memories... Lil watching the sun come up and staring at something pretty intently on the south end of the pasture.  It has to be seven or eight years ago,
because the fence of the old hen yard is still standing straight.

Gosh, what a wonderful dog she was. 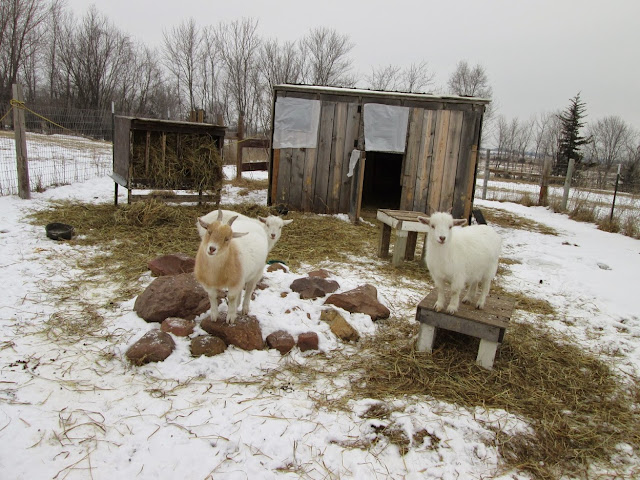 And another blast from the wintry past.... Kelly, Winnie and Windy in the sheep/goat/llama/mini-horse pen.... I sure wish I still had that feeder, it was the bomb.  Keith made their benches for them to jump and lay on (and they did!) and he had a bench in the barn for them to sleep on.

These were the sweetest little guys, and I wonder what became of them, they were given
to a Four H home, but you never know.

Posted by Mary Ann at 2:27 PM 6 comments: Links to this post