So much happened in the last decade...
I lost my sister, Kathleen, my brothers Mike and Pete,
my stepson, Brandon, and my husband Keith.
So many losses, but I am still blessed to be here and
be in good health and be able to get around and stay active.

I like to think these were still happy years, despite the loss.
Keith and I moved away from Calamity Acres in 2014, as he grew
more ill,
but I came back in the fall of 2017 (we rented the house out).
It was rehabbed and is a cozy, comfortable home for me,
the dogs and the critters.

Lilly Ann was aging, and her body had started changing, see how her
legs were bowed out?

Also, see all the chicken poop on the porch?  That was going to go away. 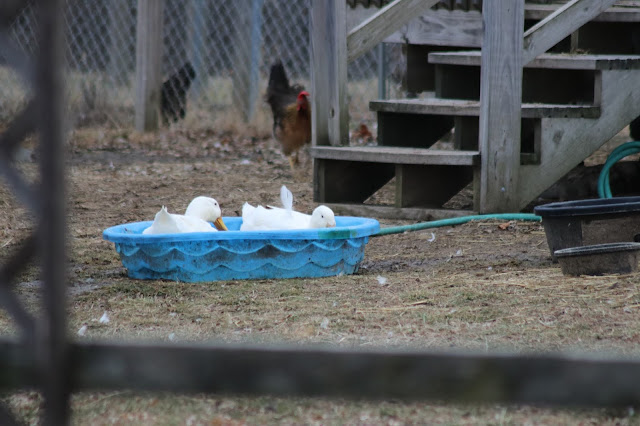 I still had three of my original four big Pekins.

Yes, they swam all winter.

We had some warmish days, and some of the snakes woke up! 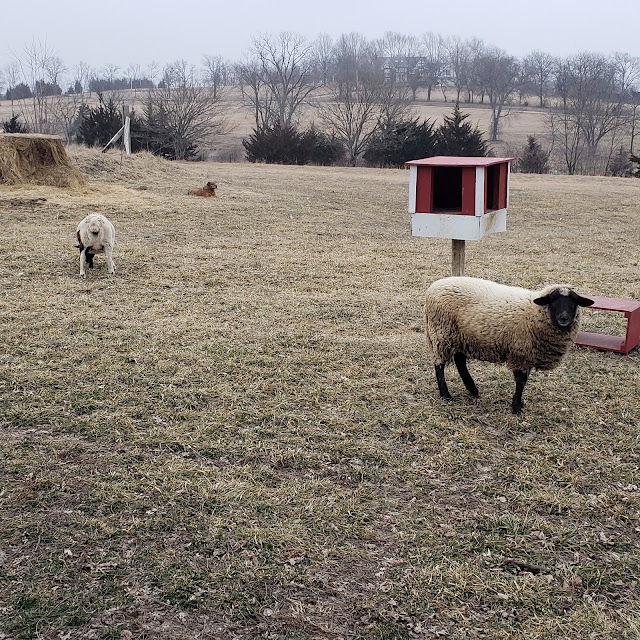 And that month, there were only two sheep in the pasture, Fluffy, on the right,
and Flicka, on the left.  Faithful Lilly Ann was guarding them.

On February 13th, I got a bucket of eggs!  Right now, I am blessed to get two or three a day,
but the hens are all getting old.

On the 16th, with cold and snow outside, I had a surprise in the sheep barn! 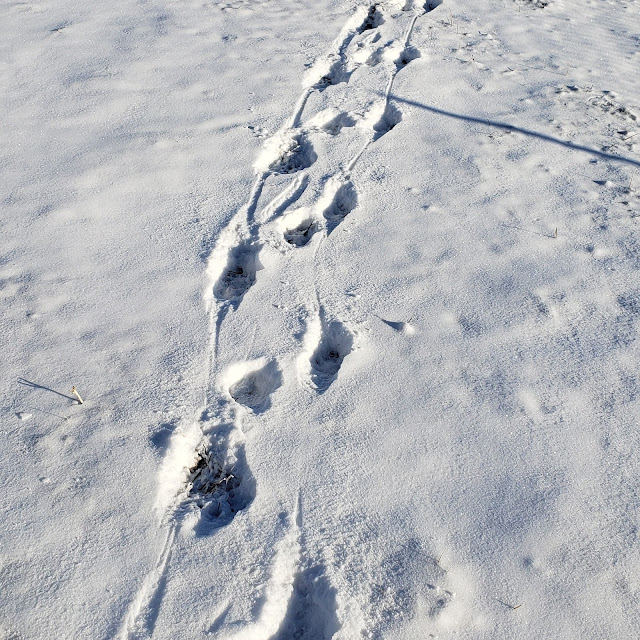 I love tracks in the snow.

Dr. LaRosh has since retired.

In April, I had a real surprise!

Fluffy was a lamb when she came here with the boarded sheep two
years ago.  There was a ram lamb in with them, but I honestly never
saw him breed her, and did not have a clue that she was pregnant.
She presented me with Niblet on April 2nd.

By mid-April, spring was on the way.

I planted one of the big planters on my deck with lettuce, and it took off!

And saw one of my favorite groups, Little River Band, for
the fifth or sixth time.... (Colin Whinnery)... I know they are
not the original Australian band... but if you ever have a chance to
see these guys .... GO.

May 14, one of the hardest days of my life... My beloved Lilly Ann crossed the Rainbow Bridge. She had spent her whole life with me, it was so hard to let her go.

In June, the poultry was rapidly wearing out their welcome on the deck and porch.
Folks, chickens (and ducks) are dirty, there are no two ways about it.  I have kept them
for many years, but they are dirty.  I had to wash the porch off every single day,
and use a shovel to shovel off the poop.
It was onerous.

The fun of watching them was not equal to the job of cleaning up after them.
I had cross-fenced the yard in March, and it was rapidly becoming time to
fence them up. 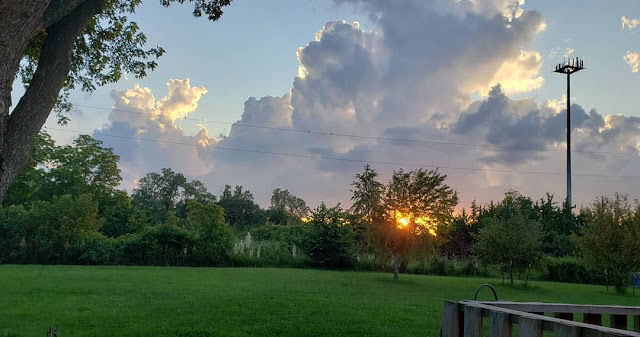 We had some spectacular evenings. 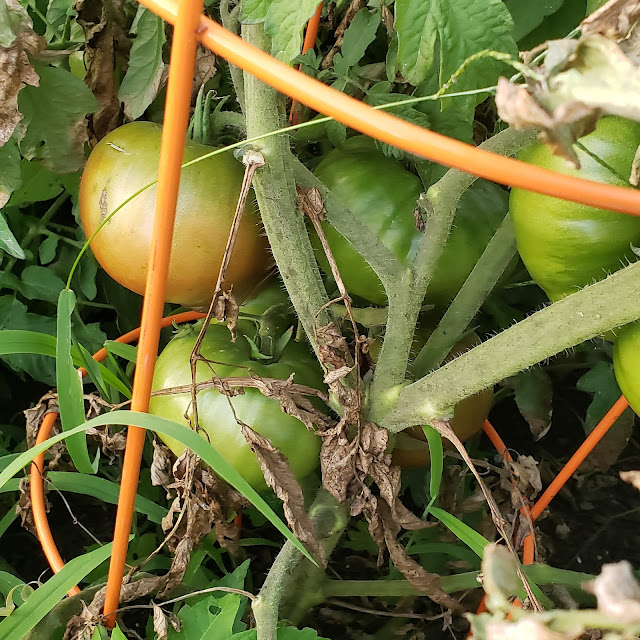 these were coming along.

And I was privileged to have the time to take
my two grands on the left (and their cousins to the right) to the pool this summer... 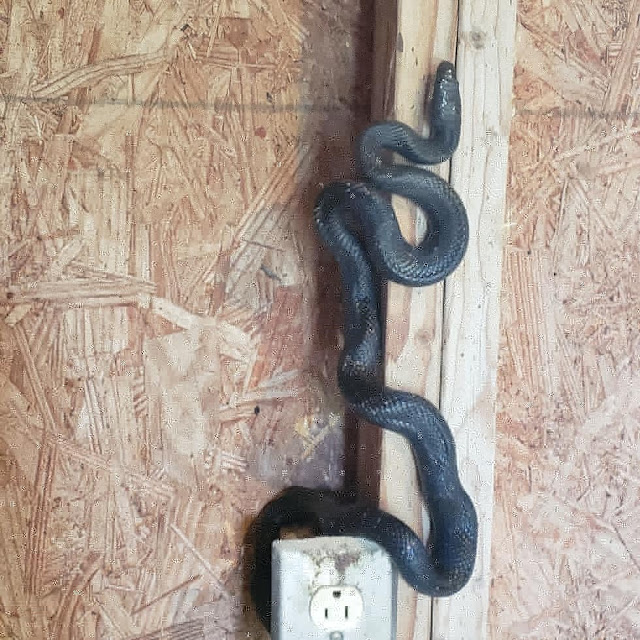 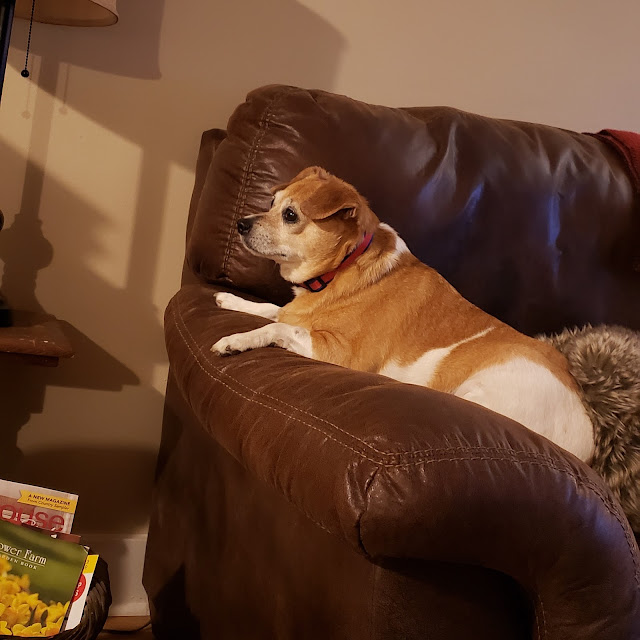 And this happened, our wonderful Fritzi came in to Jester's and my lives, and we were so glad.

She is just our little doll, thank you again, Bonner Animal Rescue. 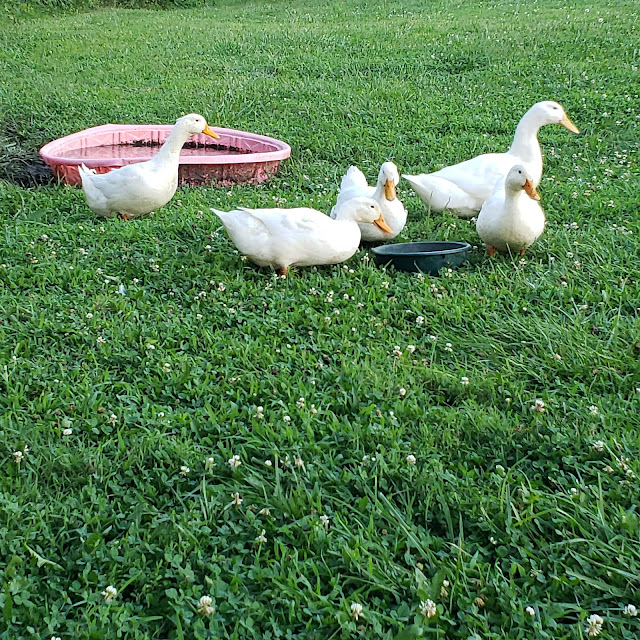 I made a decision to re-home Duckie and the Duckertons.
I love ducks.... but I was having trouble taking care of them
as I felt I needed to.... they were rehomed to a women
with duck experience and a pond, and the young layers and
their rooster went to a new home, too.

It was very hard to let Duckie go, let me tell you.
He was the duck with personality! 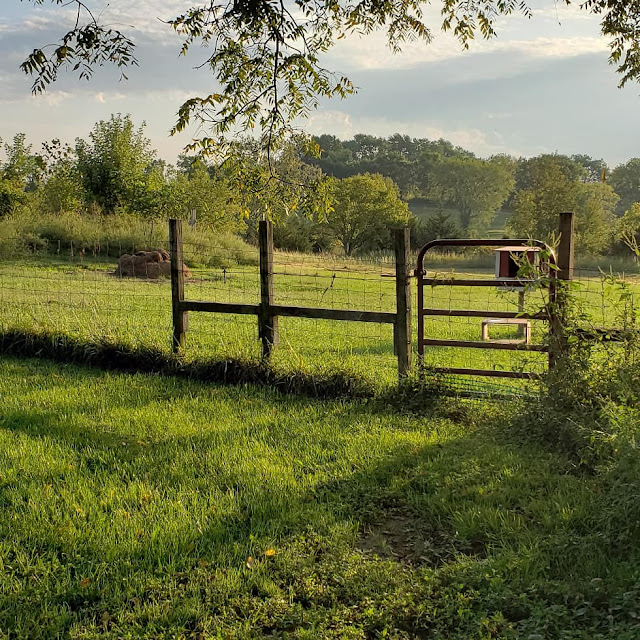 We had a beautiful late summer. 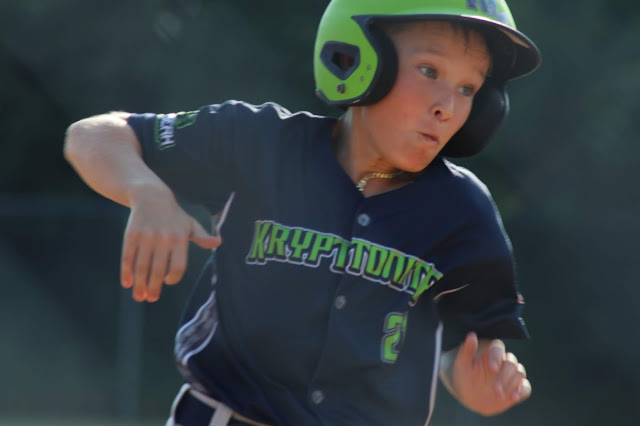 And I watched some fall baseball... 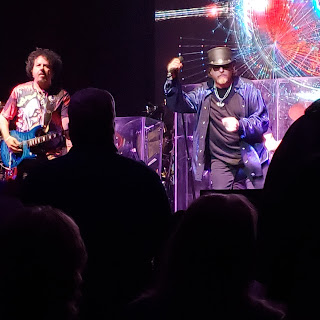 Toto, at the Uptown theater. with a horrid rainstorm
as we came out of the venue.... What a ride home!
(that's Steve Lukather and Joe Williams) 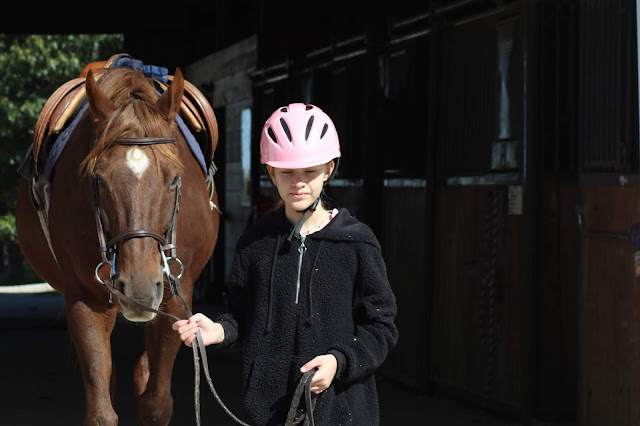 Granddaughter Paiton celebrated her birthday with a riding lesson. 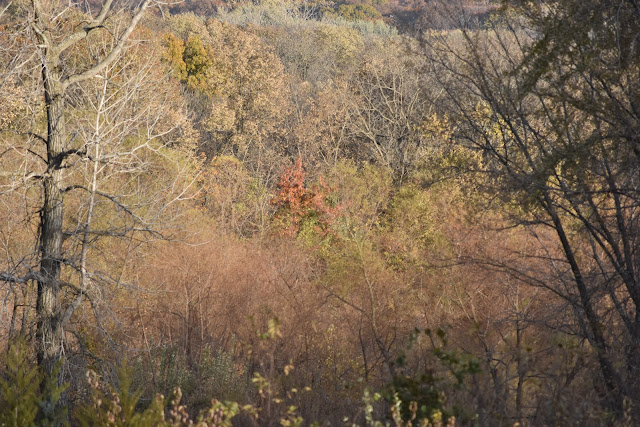 In early November, I caught a glimpse of my favorite maple tree
down beyond my neighbor's pond.

And we began preparing in earnest for "Santa's Express" at the National Agricultural Center, where I have volunteered for five years now. 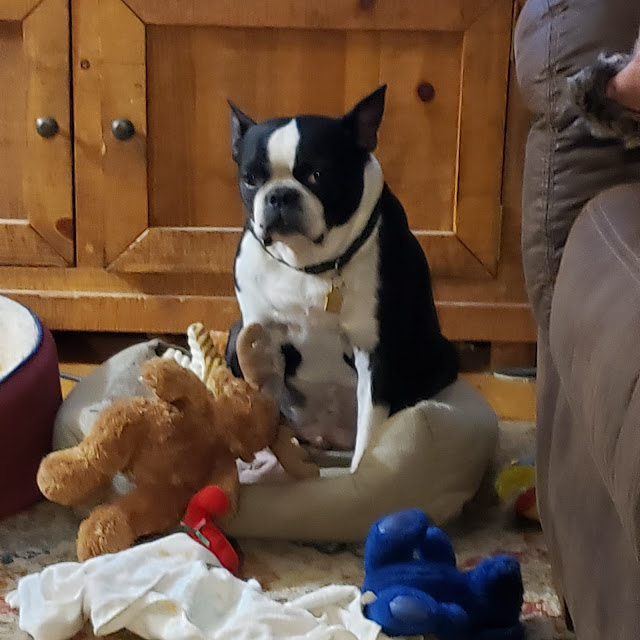 Jester was never far from me.  He is the pluckiest little dog,
and I am so glad to have him. 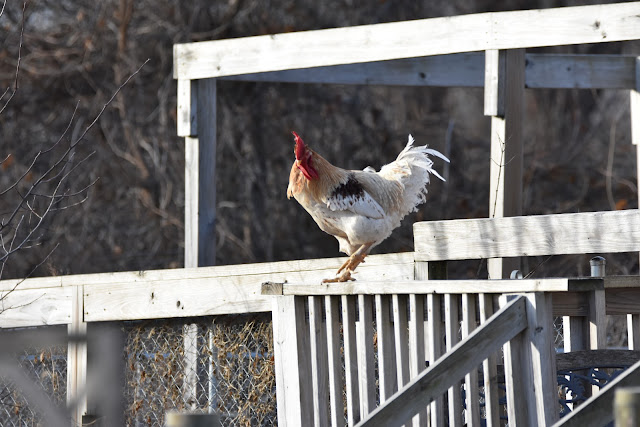 Penning the chickens on the far side of the yard was a great decision.
No more nastiness tracked into the house... hardly any flies.

Of course Singleton, who was living at the Ag Hall,
is home for the winter, and every morning, chases his daddy
Ferdinand out of the enclosure...

and Ferdie now lives by the deck, porch and side of the house
during the day, with one little red hen.

I am dealing with small amounts of poop again.

When Singleton and his girls go back to the Ag in the spring,
Ferdie will move into the old hen house with his little hen.

We had a wonderful Santa event at the National Agricultural Center, despite the fact we had a near-blizzard on the second day.  Santa was there, and 50 or so hardy people came through the storm to see him, do crafts, and have some hot chocolate and cookies.

I built Gnomelandia in my spare bedroom, because great-granddaughter Maci
was coming for the first time.

I had so much fun doing this, and am going to improve it next year.

The dogs and I had our Christmas picture taken.

When family came for Christmas.

The Reason for the Season.

And so it comes to an end, the year and the decade.

Like I said, I am so blessed to live where I do,
to enjoy the fauna and flora (a lot of fauna),
to have two faithful and loving little dogs,
and an array of critters coming during the night
to keep things lively.

I want to thank everyone for reading this and reading
for the last ten years about my humble life.

I so enjoy sharing aspects of it with you.

Here's to a great new decade for all of us!